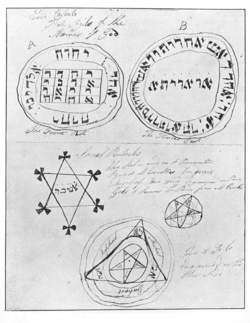 This page, featuring sigils and pentacles, is from a book of conjurations belonging to “Cunning Man” Murrell, who lived in Essex till his death in 1860. Courtesy Fortean Picture Library.

A Cunning Man or Woman was, in many ways, similar to a Witch, although without the religious connotations. Not uncommon in England from the fifteenth through the nineteenth and even into the twentieth century, they were sought out for anything from the removal of a wart or tracing lost property to the curing of a major disease. They were quite often proficient astrologers and had an immense knowledge of herbs and their uses. Many claimed to be the seventh child of a seventh child. Such people were believed to have inherent psychic and magical powers. The word "cunning" came from the Old English kenning, meaning "wise."

Perhaps the best known Cunning Man was "Cunning Murrell," James Murrell of Hadleigh, Essex, England. As a young man, he was apprenticed to a surveyor and later worked for a chemist's stillman before becoming a shoemaker. It is said that he fathered twenty children.

Murrell lived in a small cottage opposite the church in Hadleigh. Bunches of drying herbs hung from the beamed ceilings, and old colored bottles filled with mysterious liquids lined shelves and mantelpieces. The house became the center for what Eric Maple describes as "the Murrell cult." From simple beginnings, his reputation as a cunning man grew until the wealthy would travel from as far away as London for his advice and services. His herbal knowledge was vast and he was also a great healer, sometimes by laying on his hands and sometimes by using magic, amulets and/or talismans. Murrell had a huge wooden chest known as a "wizard's chest," in which he stored his many books and instruments.

Murrell rarely charged more than a shilling for his services, even when asked to work complicated magic. For minor miracles he charged only sixpence, although this was still a considerable sum for the laborer of the time. The client was always asked if he or she required "high" or "low" assistance, the former spiritual and the latter material. For high assistance Murrell conjured good angels to fight the forces of evil.

Astrology was a major part of Murrell's business. He consulted the tomes in his wooden chest and cast horoscopes. Many people of all classes who consulted with him returned again and again, his predictions were so accurate. After his death, Queen Victoria's horoscope was found among his possessions.

Scrying was also part of Murrell's stock in trade. He most often used a gazing

mirror but might also use a pail of water or other reflective surface.

There is the story of Murrell using a witch bottle to counter an evil spell put on a farm girl. The girl had been cursed by an old woman and was having fits. Murrell placed a variety of items in a small metal bottle, along with some of the girl's urine. The bottle was placed over a fire and heated. This resulted in the perpetrator beating on the door and crying out for him to stop what he was doing. But the bottle exploded and the sounds of the old woman died away. The young girl immediately recovered.

Although Murrell hoped that one of his children would carry on his work, none of them did. In fact, when Murrell died, his son Buck burned most of the contents of the wizard's chest. The novelist Arthur Morrison visited the cottage in 1880 and was just in time to see what remained of the items, mostly books on astrology and herbalism.