ogham, ogam, or ogum (all: ŏgˈəm, ōˈəm), ancient Celtic alphabet of one of the Irish runic languages. It was used by the druids and abandoned after the first few centuries of the Christian era. The ogham runes remain only in gravestone inscriptions found mostly in W Ireland and also in England, Scotland, and the Shetland Islands. The origin of ogham is uncertain; it contained 25 letters formed of straight lines and may have been adapted from a sign language. A treatise on ogham, The Book of Ballymote (15 cent.), confirms that it was a secret, ritualistic language. 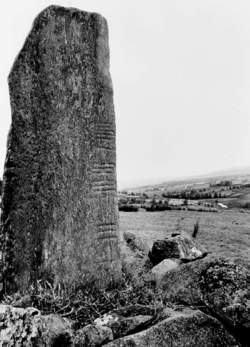 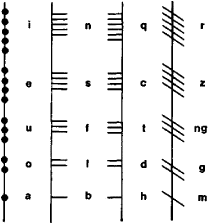