1. either one of a pair of spongy saclike respiratory organs within the thorax of higher vertebrates, which oxygenate the blood and remove its carbon dioxide
2. any similar or analogous organ in other vertebrates or in invertebrates
Collins Discovery Encyclopedia, 1st edition © HarperCollins Publishers 2005 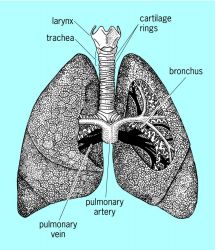 [ləŋ]
(anatomy)
Either of the paired air-filled sacs, usually in the anterior or anteroventral part of the trunk of most tetrapods, which function as organs of respiration.
McGraw-Hill Dictionary of Scientific & Technical Terms, 6E, Copyright © 2003 by The McGraw-Hill Companies, Inc.