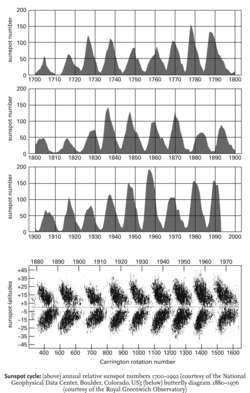 The semiregular fluctuation of the number of sunspots over an average period of approximately 11 years – or 22 years if the respective magnetic polarities of the p - and f -spots are considered, because these reverse at sunspot minimum for the groups of the new cycle (see sunspots). The nature of the cycle is shown in the graph, where the index of sunspot activity is the relative sunspot number. It can be seen that the rise to sunspot maximum usually occupies a shorter time than the fall to minimum and that the amount of activity may vary considerably between two consecutive cycles. There is some evidence for a modulation of the amplitude of the cycle over a period of around 80 years, but more data are required before the reality of this can be established.

The phase of the sunspot cycle also determines the mean heliographic latitude of all groups. At minimum the first groups of the new cycle appear at ±30–35°. Thereafter the latitude range moves progressively toward the equator, until by the next minimum the mean latitude is around ±7°. Then, while the equatorial groups are petering out, those of the next cycle begin to appear in their characteristic higher latitudes. This latitudinal progression is known as Spörer's law . At any one time there may be a considerable spread in latitude, but groups are seldom seen farther than 35° or closer than 5° from the equator. The butterfly diagram is a graphical representation of Spörer's law obtained by plotting the mean heliographic latitude of individual groups against time (see graph). Its appearance has been likened to successive pairs of butterfly wings, hence the name.

The underlying cause of the sunspot cycle is thought to be the interplay between a large-scale relatively weak poloidal magnetic field beneath the photosphere, differential rotation, and convection. The poloidal field, which is constrained to move with the ionized solar material, becomes increasingly distorted by differential rotation until an intense toroidal field is produced. The strength of this field is further enhanced by the perturbing effect of convection, which twists the field lines into ropelike configurations that may penetrate through the surface to form sunspots. This will occur first in intermediate latitudes, where the field's rate of shearing is greatest, and thereafter in increasingly low latitudes.

The inclination to the equator of the fields of opposite polarity associated with the p - and f -spots is such that they may drift apart in both longitude and latitude, as a result of differential rotation and the cyclonic rotation of individual supergranular cells (see supergranulation). The latitudinal drift is responsible for an accumulation in the polar regions of magnetic flux of the same polarity as the f -spots in the respective hemispheres. Thus the intense (0.2–0.4 tesla) localized fields of sunspots are gradually dispersed to form weak (1–2 × 10–4 tesla) polar fields, which reverse polarity (not necessarily synchronously) around sunspot maximum. When this happens differential rotation no longer intensifies the subphotospheric toroidal field but rather weakens it and reestablishes a poloidal field of opposite direction to its predecessor.

The sunspot cycle may therefore be regarded (if this model is correct) as a relaxation process that is continually repeating itself. There is reason to believe, however, that at least some of the features of recent cycles may be transitory. In particular, a prolonged minimum, termed the Maunder minimum, from about 1645 to 1715, suggests that there is more than one circulatory mode available to the solar dynamo.

Sunspots are the most obvious but by no means the only manifestation of solar activity to undergo a cyclical change over a period of around 11 years. It is therefore proper to restrict the use of the term sunspot cycle to consideration of the fluctuation of the number of sunspots and to use the more general term solar cycle when considering the variation in the level of solar activity as a whole.

[′sən‚spät ‚sī·kəl]
(astronomy)
Variation of the size and number of sunspots in an 11-year cycle which is shared by all other forms of solar activity.
McGraw-Hill Dictionary of Scientific & Technical Terms, 6E, Copyright © 2003 by The McGraw-Hill Companies, Inc.

Feedback
Flashcards & Bookmarks ?
Please log in or register to use Flashcards and Bookmarks. You can also log in with
Flashcards ?
My bookmarks ?
+ Add current page to bookmarks
Mentioned in ?
References in periodicals archive ?
Thus, the 22-year magnetic field solar cycle plays a greater role than the 11-year sunspot cycle in global climate change.
Multiresolution Analysis of the Relationship of Solar Activity, Global Temperatures, and Global Warming
The Sun is currently near the high-activity part of its 11-year sunspot cycle, so you should be able to find a sunspot or two.
Transit of Mercury: spot the spot on the sun
The Sun overslept its typical 11-year sunspot cycle, and since it finally woke up (a year late), it's given the weakest performance in 100 years.
Weakest solar cycle in a century
Michael Lockwood, a professor of Space Environment Physics in the UK, says the coincidence of both cycles (aka a Grand Solar Maximum) means that "the peaks of the 11-year sunspot cycle are" much larger, so the "average number of solar flares and ...
Flare fatale: dark possibilities behind the northern lights
"Something unexpected is happening on the sun," the space agency (http://science.nasa.gov/science-news/science-at-nasa/2013/01mar_twinpeaks/) said , "2013 is supposed to be the year of Solar Max, the peak of the 11-year sunspot cycle. Yet 2013 has arrived and solar activity is relatively low.
Nasa Concerned by Solar Activity: 'Something Unexpected Is Happening' [VIDEO]
While just about everything else in the Sun changes along with its 11-year sunspot cycle, the shape doesn't," Kuhn said.
Why the sun's shape is almost perfectly round
Scientists say the sun has been relatively quiet over the past two winters - as Irish weather-watchers know - even though it is supposed to be approaching a peak in its 11-year sunspot cycle.
FREEZY DOES IT.. You'll have no choice as experts predict 50 YEARS of icy winters
During periods of increased solar activity, particularly during high-points of the 11-year sunspot cycle, these breathtaking sky shows often appear far south of their normal Arctic venues.
Pinning down the sun-climate connection; solar influence extends beyond warm, sunny days
That's because the year 2000 is the peak of the sun's 11-year sunspot cycle. Scientists will closely, watch these huge brown spots caused by upsets in the sun's magnetic system.
Can You Spot the Problem?
Ozone levels fluctuate naturally by 1-2%, tracking the 11-year sunspot cycle; the fewer sunspots, the less ozone is produced in the stratosphere.
Defending the ozone
When holidaymakers arrive the peak of an 11-year sunspot cycle will bring more solar flares, storms and auroras than have been experienced for some time.
Burma's signposted as a spot to watch as tourists head east; TRAVELLERS IN SEARCH OF ADVENTURE AND VALUE
By studying how these structures change shapes regularly throughout the 11-year sunspot cycle, "we can use this information to improve predictions of the next solar cycle."
Total Solar Eclipse 2012: Taking The Sun's Temperature