Biochem any of a large group of fat-soluble organic compounds containing a characteristic chemical ring system. The majority, including the sterols, bile acids, many hormones, and the D vitamins, have important physiological action
Collins Discovery Encyclopedia, 1st edition © HarperCollins Publishers 2005 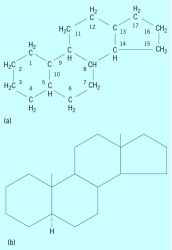 [′sti‚rȯid]
(biochemistry)
A member of a group of compounds, occurring in plants and animals, that are considered to be derivatives of a fused, reduced ring system, cyclopenta[α]-phenanthrene, which consists of three fused cyclohexane rings in a nonlinear or phenanthrene arrangement.
McGraw-Hill Dictionary of Scientific & Technical Terms, 6E, Copyright © 2003 by The McGraw-Hill Companies, Inc.