Symbol: c . The constant speed at which light and other electromagnetic radiation travels in a vacuum. It is equal to 299 792 458 m s–1 (value adopted by the IAU in 1976). Since space is not a perfect vacuum, radiation travels through space at a very slightly lower speed, which decreases somewhat when the radiation enters the Earth's atmosphere. The speed of light, c , is independent of the velocity of the observer: there can therefore be no relative motion between an observer and a light beam, i.e. the speed of light cannot be exceeded in a vacuum. This radical notion was basic to Einstein's special theory of relativity.
Collins Dictionary of Astronomy © Market House Books Ltd, 2006
The following article is from The Great Soviet Encyclopedia (1979). It might be outdated or ideologically biased.

The speed of light in free space (a vacuum) is the speed at which electromagnetic waves, including light waves, propagate. Known as c, it is a fundamental physical constant. The speed of light in free space plays an important role in modern physics because c is the limiting speed of propagation of any physical action (seeRELATIVITY, THEORY OF) and is invariant—that is, does not change—under a transition from one frame of reference to another. No signals can be transmitted at speeds greater than c, and signals can be transmitted at the speed c only in a vacuum. The relation between the mass of a material body and the body’s total energy is expressed in terms of c. The quantity c occurs in the Lorentz transformations, which express the changes in coordinates, velocities, and time when the frame of reference is changed. Many other relations also involve c. 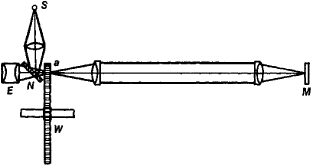 Figure 1. Determination of the speed of light by the Fizeau toothed wheel method: (S) light source, (W) variable-speed rotating toothed wheel for which the widths of the teeth and of the gaps (a) between the teeth are accurately known, (N) semitransparent mirror, (M) reflecting mirror, (MN)accurately measured distance, (E) eyepiece. The light seen by the observer at E is of greatest brightness when the time required for the light to travel the distance NM and back is equal to the time required for W to turn by an integral number (1, 2, 3, and so on) of teeth. When this condition is fulfilled, the light beam passes strictly midway between the teeth both on the trip to the reflecting mirror and on the return trip.

The quantity c′, the speed of light in a medium, generally refers to the speed of propagation of just optical radiation, or light. This speed depends on the medium’s refractive index n, which, because of the phenomenon of dispersion, is different for different frequencies ν of the radiation: c′(v) = c/n(v). Because of this dependence, the phase velocity of light in a medium is different from the group velocity (when nonmono-chromatic light is being considered). In a vacuum, these two quantities are equal. When experimental determinations of c’ are made, the group velocity or signal velocity (speed of energy flow) is always measured. The signal velocity differs from the group velocity only in some special cases.

The measurement of c with as great an accuracy as possible is extremely important not only for general theoretical reasons and for the determination of the values of other physical quantities but also for practical purposes (see below). The first measurement of the speed of light was made in 1676 by O. Roemer. His method made use of the variation in the time between eclipses of Jupiter’s satellite Io. Another astronomical determination was made by J. Bradley in 1728 on the basis of his observations of the aberration of starlight.

The first measurement of the speed of light on earth was made by A. H. L. Fizeau in 1849. It should be noted that the refractive index of air differs very little from 1; terrestrial measurements consequently yield a value extremely close to c. Fizeau based his measurement on the time required by light to traverse an accurately known distance. In his experiment, a light beam was periodically interrupted by a rotating toothed wheel. The beam traversed the known distance of about 8 km and, after being reflected by a mirror, returned to the periphery of the wheel (Figure 1). Here, the light either encountered a tooth and was blocked or passed through a gap between two teeth and was perceived by the observer. The time required by the light to traverse the known distance was determined from the known speeds of rotation of the wheel. Fizeau obtained for c the value 315,300 km/sec.

The basic ideas and experimental designs underlying Fi-zeau’s and Foucault’s determinations of the speed of light were subsequently used, in a more refined form, by other scientists. Foucault’s method attained its highest development in the work of A. Michelson (1879, 1902, and 1926). The value Michelson obtained in 1926, c — 299,796 ± 4 km/sec, was the most accurate measurement at that time and was used in international tables of physical quantities. 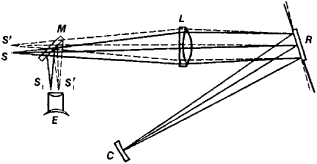 Figure 2. Determination of the speed of light by the Foucault rotating mirror method: (S) light source, (R)rapidly rotating mirror, (C) fixed concave mirror whose center is coincident with the axis of rotation of R (light reflected by C therefore always travels back to R), (M) semitransparent mirror, (L)lens, (E) eyepiece, (RC) accurately measured distance. As the light travels along the path RC and back, R turns; the position of R when the light arrives at R again is indicated by a broken line. The return path of the beam of rays through L is also indicated by broken lines. The reflected beam is converged by L to the point S′ rathen than S, as would be the case if R were stationary. The speed of light is determined by measuring the shift SS′.

In addition to accomplishing the task of determining the speed of light, the measurements made in the 19th century played an extremely important role in physics. They provided further confirmation of the wave theory of light (seeOPTICS), which had already been adequately substantiated by other experiments—for example, Foucault in 1850 compared the speeds of light of the same frequency ν in air and water. The measurements also demonstrated the close relation between optics and the theory of electromagnetism, since the measured speed of light agreed with the speed of electromagnetic waves that was calculated from the ratio of the electromagnetic and electrostatic units of electric charge. This ratio was measured in experiments by W. Weber and F. Kohlrausch in 1856. More accurate measurements were subsequently made by J. C. Maxwell. The ratio was one of the starting points for the creation of the electromagnetic theory of light by Maxwell between 1864 and 1873.

The measurements of the speed of light also revealed a deep-seated contradiction in the basic theoretical premises of the physics of that time with regard to the concept of the universal ether. The measurements provided evidence for mutually exclusive hypotheses of the behavior of the ether as material bodies moved through it. Partial ether drag found support in the analysis of the phenomenon of light aberration by the English physicist G. B. Airy in 1871 and in the Fizeau experiment of 1851, which was repeated in 1886 by Michelson and E. Morley. Experiments by Michelson in 1881 and by Michelson and Morley in 1887 furnished evidence against ether drag. This contradiction was not resolved until A. Einstein advanced his special theory of relativity in 1905.

Present-day measurements of the speed of light often use the modulation method, which is a modernization of the Fizeau method. The toothed wheel is replaced by, for example, an elec-trooptic, diffraction, or interference optical modulator, which interrupts or attenuates the light beam (seeMODULATION OF LIGHT). A photoelectric cell or a photomultiplier is used as the radiation detector. The use of a laser as the light source, the employment of an ultrasonic modulator with a stabilized frequency, and the improvement of the accuracy of measurement of the known distance permitted a reduction in measurement error and resulted in the value c = 299,792.5 ± 0.15 km/sec.

In addition to direct measurements of the speed of light based on the time required to traverse a known distance, extensive use is made of indirect methods, which provide still better accuracy. In 1958 the British physicist K. Froome used a microwave free-space interferometer to obtain the value c = 299,792.5 ± 0.1 km/sec for radiation of wavelength λ = 4 cm. The error is still smaller when the speed of light is determined as the quotient of independently found λ and ν of atomic or molecular spectral lines. In 1972 the American scientist K. Evenson and co-workers found, to an accuracy of 11 digits, the radiation frequency of a CH4 laser by using a cesium frequency standard (seeQUANTUM FREQUENCY STANDARDS). They determined the radiation wavelength (approximately 3.39 micrometers) by using a krypton frequency standard. The final result they obtained was c = 299,792,456.2 ± 0.8 m/sec. As of 1976, the speed of light in a vacuum was taken as 299,792 ± 0.4 km/sec, in accordance with a decision of the 12th General Assembly of the International Scientific Radio Union (now the International Union of Radio Science) in 1957.

Knowledge of the exact value of the speed of light is of great practical importance, particularly in the determination of distances (on the basis of the travel time of radio or light signals) in radar, optical detection and ranging, and range-finding. This method of distance determination is used especially widely in geodesy and in artificial-earth-satellite tracking systems; it has also been used to make accurate measurements of the distance between the earth and the moon and to solve a number of other problems.

[′spēd əv ′līt]
(electromagnetism)
The speed of propagation of electromagnetic waves in a vacuum, which is a physical constant equal to exactly 299,792.458 kilometers per second. Also known as electromagnetic constant; velocity of light.
McGraw-Hill Dictionary of Scientific & Technical Terms, 6E, Copyright © 2003 by The McGraw-Hill Companies, Inc.

All electromagnetic radiation, including light, radio transmission and electricity, travels at approximately 186,000 miles (300,000 kilometers) per second; more than seven times around the equator in one second. More precisely, the speed is 299,792,458 meters per second in a vacuum.

Never Fast Enough!
This inherent speed of Mother Nature is why computers work so fast. Within the tiny chip, electricity has to flow only a couple of millimeters, and, within an entire computer, only a few feet. Yet, as fast as that is, it is never fast enough. There is resistance in the lines, which slows down the current, and even though transistors switch in billionths of a second, scientific and multimedia applications are always exhausting the fastest computers. See software bloat.
Copyright © 1981-2019 by The Computer Language Company Inc. All Rights reserved. THIS DEFINITION IS FOR PERSONAL USE ONLY. All other reproduction is strictly prohibited without permission from the publisher.