A15 phases | Article about A15 phases by The Free Dictionary
https://encyclopedia2.thefreedictionary.com/A15+phases
Printer Friendly

A series of intermetallic compounds which have a particular crystal structure and the chemical formula A3B, where A represents a transition element and B can be either a transition or a nontransition element. Many A15 compounds exhibit the phenomenon of superconductivity at relatively high temperatures in the neighborhood of 20 K (-424°F) and in high magnetic fields on the order of several tens of teslas (several hundred kilogauss). High-temperature–high-field superconductivity has a number of important technological applications and is a challenging fundamental research area in condensed-matter physics. See Superconductivity

The A15 compounds crystallize in a structure in which the unit cell, the repeating unit of the crystal structure, has the overall shape of a cube. The B atoms are located at the corners and in the center of the cube, while the A atoms are arranged in pairs on the cube faces (see illustration). A special characteristic of the A15 crystal structure is that the A atoms form mutually orthogonal linear chains that run throughout the crystal lattice, as shown in the illustration. The extraordinary superconducting properties of the A15 compounds are believed to be primarily associated with these linear chains of transition-element A atoms. See Crystal 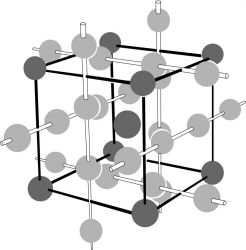 A15 crystal structure of the A3B intermetallic compounds