(ăb`əkəs, əbăk`–), in mathematics, simple device for performing arithmetic calculations. The type of abacus now best known is represented by a frame with sliding counters. An elementary abacus might have ten parallel wires strung between two boards on a frame, with nine beads on each wire. Each bead on a given wire has the same value: either ten or some multiple or submultiple of ten. For example, all of the beads on a particular wire may have a value of 1, making this the units wire, or 10, making this wire the tens wire. Numbers are represented and added together on the abacus by grouping beads together. To represent 155, five beads on the units wire are separated from the others on that wire, five beads on the tens wire, and one bead on the hundreds wire. To add 243 to 155, three more beads on the units wire are slid over to join the group of five, four more beads on the tens wire join the five there, and two more beads on the hundreds wire join the one there. The number 398 is now represented on the abacus. Subtraction can be performed by separating groups of beads. More elaborate processes are used to perform multiplication and division. The abacus is used for calculating in the Middle East, Asia, and Russia and for teaching children the elements of arithmetic in many countries. An apparatus of pebbles or other movable counters was known in antiquity to the Egyptians, Greeks, Romans, and Chinese. A special merit of the abacus was that it simplified the addition and subtraction of numbers written in Roman numerals. Another type of abacus includes a board covered with sand or wax to facilitate making and erasing marks.

(ăb`əkəs), in architecture, flat slab forming the top member of a capital. In classical orders it varies from a square form having unmolded sides in the Greek Doric, to thinner proportions and ovolo molding in the Greek Ionic, and to sides incurving and corners cut in Roman Ionic and Corinthian examples. In Romanesque work the abacus is heavier in proportion, projects less, and is generally molded and decorated. In Gothic work the form varies, appearing in square, circular, and octagonal forms with molded members.

The flat area at the top of a capital, dividing a column from its entablature. It usually consists of a square block, or is enriched with moldings. In some orders the sides are hollowed and the angles at the corner are truncated.

a device used to carry out arithmetic calculations (Figure 1). Although more advanced calculating machines are now in use, the abacus is still employed in many countries for practical computations.

The forerunner of the modern Russian abacus was the doshchanyi schet (counting board), which first appeared in Russia in the 16th century. The development of the doshchanyi schet was greatly influenced by the system of taxation used in Russia from the 15th to 17th centuries (seeSOSHNOE PIS’MO). This system required the addition, subtraction, multiplication, and division not only of whole numbers but also of fractions, since the unit of taxation, the sokha, was divisible into parts.

The doshchanyi schet consisted of two frames that could be folded together. Each frame was divided into two sections (in later types only the lower part of the frame was so divided). The second frame was needed because of the nature of the monetary system. Counters were strung on taut strings or wires running across the frame. Since the decimal number system was used, each whole-number row had nine or ten counters (Figure 2). Operations on fractions were performed on incomplete rows: a row of three counters represented three thirds, and a row of four 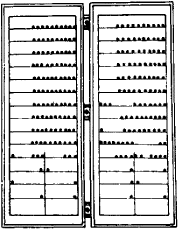 Note on Figure 2.Doshchanyi schet (from a 17th century drawing); the number represented on the left is ¼ + ⅙ +

The introduction of Arabic numerals and a new taxation system entailed the loss of the rows for fractions in the late 17th century. In the early 18th century, the second frame was eliminated, and the Russian abacus acquired its present appearance. A single incomplete row was retained. Usually containing four counters, it separates the two rows used for tenths and hundredths from the other rows and is sometimes used for fourths and halves. Outside the USSR, the Russian abacus is used in Iran. Abaci developed in the 19th century on the basis of the Russian abacus are employed as teaching aids in Western Europe.

[′ab·ə‚kəs]
(architecture)
A slab forming the topmost division of the capital of a column.
(mathematics)
An instrument for performing arithmetical calculations manually by sliding markers on rods or in grooves. abacus A
The uppermost member of the capital of a column; often a plain square slab, but sometimes molded or otherwise enriched.

1. a counting device that consists of a frame holding rods on which a specific number of beads are free to move. Each rod designates a given denomination, such as units, tens, hundreds, etc., in the decimal system, and each bead represents a digit or a specific number of digits
2. Architect the flat upper part of the capital of a column

One of the earliest counting instruments. Similar devices predate the Greek and Roman days. It uses sliding beads in columns that are divided in two by a center bar. The top is "heaven," where each of two beads is worth 5 when moved to the center bar. The bottom is "earth," where each of five beads is worth 1 when moved toward the center. See biquinary code.