Also found in: Dictionary, Wikipedia.
Related to Aberration of Light: Stellar aberration
The following article is from The Great Soviet Encyclopedia (1979). It might be outdated or ideologically biased.

As the observer is displaced together with the instrument sensing the light—for example, an astronomical telescope— a certain small time interval t is required for the ray of light incident upon the objective at point O (see Figure 1) to traverse the distance from the objective O to the cross hairs T located in the focal plane of the objective. During that time the instrument experiences translational motion in the direction toward the point A (apex) and occupies the position O’ T’, while the image of the celestial body is displaced 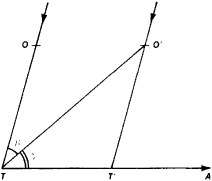