About infrared | Article about About infrared by The Free Dictionary
https://encyclopedia2.thefreedictionary.com/About+infrared
Printer Friendly

Infrared is the electromagnetic radiation outside the color spectrum range of visibility, at the lower end and next to the red. Infrared film has been sensitized to this radiation. Infrared film is commonly used at séances where there is total darkness, or where the light is too dim to allow regular photography. In this way it is possible to photograph things which cannot be seen under many séance conditions (e.g. ectoplasm, spirit forms).

That region of the electromagnetic spectrum at wavelengths immediately above the visible spectrum; the heat in this region of the spectrum which is generated by a light source usually is undesirable (since it represents a loss in efficiency), but such heat is used in industrial applications for drying, baking a surface, etc. 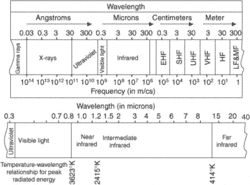 That portion of the electromagnetic spectrum with a wavelength longer than deep red light (wavelength between 7800 and 1,000,000 angstroms and just slightly longer than the longest wavelength of visible light), thus not visible but sensed as heat. See also near infrared and far infrared.

(electronics)
(IR) Electromagnetic waves in the frequency range just below visible light corresponding to radiated heat. IR waves can be generated by a kind of LED and are often used for remote controls for televisions etc. and in some docking stations.

An invisible band of radiation at the lower end of the visible light spectrum. With wavelengths from 750nm to 1mm, infrared starts at the end of the microwave spectrum and ends at the beginning of visible light. Infrared transmission typically requires an unobstructed line of sight between transmitter and receiver.

Widely used in most audio and video remote controls, infrared transmission is also used for wireless connections between computer devices (see IrDA) and a variety of detectors (see IR detector).

Infrared Can Be Anything Below Red
Infrared means "below red," and red frequencies are at the bottom of visible light. Therefore, infrared may refer to any type of invisible electromagnetic radiation below visible light, including AM, FM and TV. See infrared imaging, infrared wavelengths, IR remote control and IRED.