acacia (əkāˈshə), any plant of the large leguminous genus Acacia, often thorny shrubs and trees of the family Leguminosae (pulse family). Chiefly of the tropics and subtropics, they are cultivated for decorative and economic purposes. Acacias are characteristic of savanna vegetation and are especially numerous in the South African bushveld. The foliage often appears feathery because of the many small leaflets, but in some species leaflike flattened stems contain chlorophyll and take the place of leaves. Various Old World species (especially A. arabica and A. senegal ) yield gum arabic; other species, chiefly A. catechu, yield the dye catechu. Blackwood (A. melanoxylon) is valued in Australia for its hardwood timber. Other members of the genus are valuable for lac, for perfume and essential oils, and for tannins; some are used as ornamentals. The Australian acacias are commonly called wattles—their pliable branches were woven into the structure of the early wattle houses and fences—and Wattle Day celebrates the national flower at blossoming time. Many wattles are cultivated elsewhere, particularly in California, as ornamentals for their characteristic spherical, dense flowers. The Central American bullhorn acacias (e.g., A. sphaerocephala) have large hollow thorns inhabited by ants that are said to feed upon a sweet secretion of the plant and in turn guard it against leaf-eating insects. The most common acacia indigenous to the United States is the cat's-claw (A. gregii) of the arid Southwest. The biblical shittim wood is thought to have come from an acacia. Various species of locust are sometimes called acacia, and acacias may be called mimosa; all are of the same family. Acacia is classified in the division Magnoliophyta, class Magnoliopsida, order Rosales, family Leguminosae.
The Columbia Electronic Encyclopedia™ Copyright © 2022, Columbia University Press. Licensed from Columbia University Press. All rights reserved. 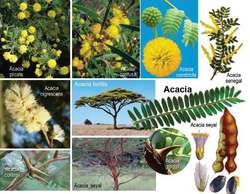 Feedback
Flashcards & Bookmarks ?
Please log in or register to use Flashcards and Bookmarks. You can also log in with
Flashcards ?
My bookmarks ?
+ Add current page to bookmarks
Mentioned in ?
References in periodicals archive ?
Acacia catechu contains flavonoids; kaempferol, quercetin, catechin, and terpene; camphor and phytol.
Herbo-Medicinal Formulation; Marham-e-raal: A Potent Ointment for Acute and Chronic Wounds - A Review
A medicinal plant extract of Scutellaria Baicalensis and Acacia catechu reduced LPS-stimulated gene expression in immune cells: a comprehensive genomic study using QPCR, ELISA, and microarray.
Plant Compounds that Reduce Joint Cartilage Loss
The subjects were provided with UP1306 (100 mg per capsule); active ingredients are standardized bioflavonoid extracts from root bark of Morus alba (white mulberry) and heartwood of Acacia catechu (Senegalia catechu) and inactive ingredients are Microcrystalline Cellulose, Magnesium Stearate (vegetable), and Silicon Dioxide.
The Effects of Morus alba and Acacia catechu on Quality of Life and Overall Function in Adults with Osteoarthritis of the Knee
The composition of bioflavonoid standardized extracts from Scutellaria baicalensis, Acacia catechu, and Morus alba may suit very well in this category.
Cartilage Protection and Analgesic Activity of a Botanical Composition Comprised of Morus alba, Scutellaria baicalensis, and Acacia catechu
MATERIALS AND METHODS: The two medicinal plants Acacia catechu (Katha in Manipuri) and Ficus hispida (Ashee heibong in Manipuri) were collected from different parts of Manipur during the period from March 2006 to February 2007 and processed in the laboratory to get the yield or extract as given below and also to determine the bactericidal effect on two known strains of Staphylococcus aureus (ATCC 25923) and Escherichia coli (ATCC 25922), as described in the Clinical Bacteriology by E.
A study of the bactericidal property of aqueous extract of medicinal plants-acacia catechu and fiscus hispida used in the traditional system of medicine in manipur
TABLE 1: Different seed sources of Acacia catechu and Elaeocarpus floribundus with latitude, longitude, and number of seeds used for germination.
The effect of seed sources variation and presowing treatments on the seed germination of Acacia catechu and Elaeocarpus floribundas species in Bangladesh
Thokchom, "Antipyretic, antidiarrhoeal, hypoglycaemic and hepatoprotective activities of ethyl acetate extract of Acacia catechu Willd.
Flavocoxid, a nutraceutical approach to blunt inflammatory conditions
Three botanical extracts -Scutellaria baicalensis, Acacia catechu, and Morus alba can enable a significant reduction in the progression of arthritis.
Herbal Respite from Joint Discomfort
The Kavirajes used two plants, namely Acacia arabica and Acacia catechu for treatment of diarrhea.
A selection of medicinal plants used for treatment of diarrhea by folk medicinal practitioners of bangladesh
Acacia catechu Willd., a plant also present in Bangladesh has been clinically evaluated in the treatment of lepromatous leprosy (Ojha, D., 1969).
A randomized survey of medicinal plants used by folk medicinal practitioners in ten districts of Bangladesh to treat leprosy
Anti-plasmodial activity of crude extract or any phytochemical component present in Acacia catechu has not been reported so far.
Scientific evaluation of two plants used for treatment of malaria by folk medicinal practitioners in northern districts of Bangladesh
A more complex procedure was followed with the wood of Acacia catechu, where the wood was boiled in water and the water evaporated.
A selection of medicinal plants used as blood purifiers by folk medicinal practitioners of Bangladesh