a device for accelerating charged particles with an electric field that is constant or varies slightly over the entire particle acceleration time.

Types. Depending on the kind of high-voltage generator used, electrostatic, cascade, resonance transformer, and pulsed high-voltage accelerators are distinguished.

In an electrostatic accelerator the voltage is produced by an electrostatic generator, that is, a generator based on the transfer of charge by a mechanical conveyor. A generator with a flexible conveyor made of a dielectric belt is called a Van de Graaff generator (Figure 2). Electric charge is sprayed on the surface of the moving conveyor by a charging device, which consists of a row of sharp points and a flat electrode between which a corona discharge is created. The charge is then transferred to a high-voltage electrode, where it is removed by means of a similar device and is replaced on the surface of the conveyor by a charge of opposite sign, which is subsequently removed by the first device. There also exist generators with a conveyor in the form of a rigid dielectric rotor. Since the 1960’s a chain conveyor with metal electrodes connected by dielectric links has been used in some electrostatic accelerators. The advantages of the chain conveyor are high stability of the charging current, long operating life, and high efficiency. Accelerators with such a charging system are called pelletrons. The maximum voltage obtainable by means of electrostatic generators is about 20 megavolts (MV); apparatus is being designed for a voltage of up to 30 MV.

In a cascade accelerator the voltage source is a cascade generator, which converts a low alternating voltage into a high direct voltage by successively switching in the direct voltages produced in the individual stages of the circuit. Of the several existing schemes for cascade generators, the best known is the Cock-croft-Walton generator, whose stages are connected to the power source in series (seeCASCADE GENERATOR). In the 1960’s two types of cascade generators with parallel-powered stages came into use. One type is the dynamitron; the other type features inductive coupling of the stages to the power source (Figure 3). The advantage of these new cascade generators is uniform distribution of voltage through the stages; a shortcoming of the generators is that the stages must be insulated against the total operating voltage of the apparatus. Voltages of up to 4 MV can be obtained in presently available cascade generators having a power rating of a few tens of kilowatts. 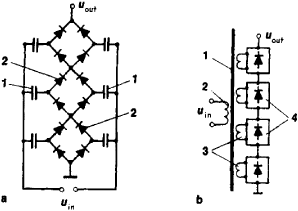 producing an accelerated particle energy of up to 2–3 million electron volts (MeV).

The voltage source in a pulsed accelerator may be a pulse transformer of various types, such as a Tesla coil, or it may be an impulse generator. In the impulse generator a large number of capacitors are charged in parallel from a common source, and the capacitors are then discharged in series through spark gaps. A voltage pulse with an amplitude of up to a few megavolts is thereby applied to the load.

The linear dimensions of high-voltage accelerators are determined by the voltage of the high-voltage generator and the dielectric strength of its insulation and of the accelerating system. Because of the low dielectric strength of air at atmospheric pressure, it usually is inadvisable to construct an open-type high-voltage accelerator with an energy greater than 1 MeV. Higher-energy accelerators are housed in sealed vessels filled with gas at a pressure of 5–15 atmospheres. This approach substantially reduces the size of the accelerators and decreases the construction cost. Particularly effective are electronegative gases, such as Freon and sulfur hexafluoride, and mixtures of these gases with nitrogen and carbon dioxide. Pulsed accelerators are housed inside vessels containing a liquid dielectric, such as transformer oil or distilled water.

The principal method of increasing the operating voltage gradient in high-voltage insulation is to divide large insulating structures into a number of small sections by means of metal electrodes with a specified distribution of potential.

accelerated by the voltage generator. The charge-exchange target may be a gas-filled tube, a vapor jet, or a thin foil. There also exist units consisting of two tandem accelerators (Figure 5). In this apparatus low-energy neutral particles are injected into the high-voltage electrode of the first accelerator. The particles interact with a target and are converted into negative ions, which are then accelerated and injected into the second accelerator. This scheme makes it possible to obtain singly charged ions with triple the energy that can be obtained from only one acceleration.

Charged-particle sources. The electron sources, which are often called electron guns, usually consist of a heated cathode and a system of electrodes that shapes the electron stream emitted by the cathode. The cathode may be heated by a current flowing directly through it or by a separate heater. Cold cathodes with field emission and subsequent explosive emission have been successfully used in pulsed high-current high-voltage accelerators. Here, the initial source of the electrons is very small protrusions on the cathode surface; near these protrusions the strength of the electric field increases to ~107 V/cm. The electric current flowing through the microprotrusions causes them to rapidly heat and partially vaporize. Under the action of the electron beam, the vapor cloud turns into a plasma, which itself becomes an electron source.

In ion sources charged particles are usually produced inside a discharge chamber, which is filled with a gas or vapor containing atoms of the corresponding element; the pressure within the chamber is 10–1–10–3 mm Hg. Primary ionization occurs as a result of the electric discharge, which may be, for example, a high-frequency arc discharge in nonuniform electric and magnetic fields, as in the duoplasmatron proposed by the German physicist M. von Ardenne. A schematic of a high-frequency ion source is presented in Figure 6. Ions formed in the discharge region are extracted therefrom by the field of the extraction electrode and enter the accelerating system. Positive ions are obtained from the central part of the discharge region, where their concentration is higher, and negative ions are obtained from the periphery of the region. Negative ions for tandem accelerators can also be obtained, for example, by having a beam of positive ions undergo charge exchange in a gaseous or vapor-jet target or by causing the positive ions to interact with a solid surface covered with atoms of alkali metals.

In contrast to the case of insulating structures used in a compressed gas, the simple division of the insulator of the accelerating tube into sections by metal electrodes is ineffective. When the voltage of the high-voltage generator is greater than 4–5 MV, the rate of discharge processes in the tube increases sharply, and the tube’s dielectric strength is reduced. This phenomenon, which is called the total voltage effect, is due to the presence of the through vacuum channel, in which secondary charged particles are exchanged and multiplied. The origins of these particles include bombardment of the inner surface of the tube by scattered beam particles, emission of electrons from contaminated surfaces, and discharge over the insulator surface. Various accelerating-tube designs have been proposed to control the total voltage effect. The best known are accelerating tubes with a “sloped field,” in which the tube electrodes are mounted at a slight angle to the plane of the tube’s cross section and this angle periodically reverses. The accelerated particles, which have considerable energy, travel along the channel of the tube without touching its walls, and the secondary lower-energy particles that arise inside the tube are retarded by the electrodes. The total voltage effect has also been eliminated in flat-electrode accelerating tubes, in which the electrodes and insulators are soldered together and the vacuum is 10–8–10–9 mm Hg.

Advances in the development of new designs for high-voltage generators and accelerating tubes have made it possible to increase the proton energy obtainable in tandem accelerators to 40 MeV. Multiply charged heavy ions can also be accelerated to much higher energies. The beam current of the largest high-voltage ion accelerators ranges from microamperes to tens of microamperes; in these accelerators the beam size at the target is a few millimeters, and the divergence of the beam is less than 10–3radians.

Historical survey. The first cascade-type high-voltage accelerator was built in 1932 by the British physicists J. Cockcroft and E. Walton. It was capable of providing a particle energy of 700 kiloelectron volts (KeV). In the prewar years electrostatic accelerators with high-voltage Van de Graaff generators underwent the greatest development. By 1940 the employment of compressed gas for insulation and the use of multisection high-voltage structures had made it possible to increase the energy of the accelerated particles to ~4 MeV. In the USSR the first electrostatic accelerators were developed at the Ukrainian Physicotechnical Institute under the direction of A. K. Val’ter.

The postwar period saw a further increase in particle energy through the use of tandem accelerators and accelerating tubes with a sloped field, which were proposed by R. Van de Graaff of the USA. Improvements in the charging and accelerating systems of electrostatic accelerators were made by R. Herb of the USA in the 1960’s. New types of cascade generators that made it possible to increase the power of high-voltage accelerators (the dynamitron and a transformer with an insulated core) were developed in the USA between 1960 and 1965 by K. Morganstern and Van de Graaff.

Most current Soviet high-voltage accelerators for scientific and industrial use were developed by the staff of the D. V. Efremov Scientific Research Institute of Electrophysical Equipment. Transformer accelerators were proposed and developed in the 1960’s by the staff of the Institute of Nuclear Physics of the Siberian Division of the Academy of Sciences of the USSR under the direction of G. I. Budker.

Applications. For many years after the construction of the first high-voltage accelerator in 1932, the principal area of application of such accelerators was nuclear physics. The accelerators made it possible to obtain important data on, for example, the internal structure of atomic nuclei, the binding energies of nucleons (protons and neutrons) in atomic nuclei, the cross sections of nuclear reactions, and the surface and spatial structure of solids. In addition to their direct applications in physical experimentation, high-voltage accelerators are used for such purposes as preliminary acceleration of charged particles in large cyclic and linear accelerators, heating of the plasma in steady-state fusion machines, and rapid heating of targets in pulsed fusion machines.

Because of their low cost and compactness, high-voltage accelerators have found broad application in various manufacturing processes in industry. Small machines that accelerate ions to an energy of 100–200 keV are used to dope thin layers of semiconductors in the manufacture of electronic devices. Another application of the ion accelerators is the production of neutrons through the irradiation of tritium-containing targets with accelerated deuterium ions. Such neutron sources (neutron generators) can be used, for example, to perform activation analysis of various substances and to investigate the resistance of nuclear reactor components to neutron bombardment. Neutron generators with fluxes in excess of 1012 neutrons/sec have been developed.

Electron accelerators operating at 1–2 MeV and a power of a few kilowatts (kW) can be used as bremsstrahlung X-ray generators in industrial flaw detection. × rays are emitted when the electron beam interacts with a target made of a heavy metal, such as tungsten. The small size of the electron beam at the target (millimeters or fractions of a millimeter) makes it possible to take high-resolution X-ray pictures.

A promising application of electron accelerators operating at 0.2–3 MeV and a power of 10–100 kW is the processing of various materials with electron beams to impart new properties to them through, for example, radiation polymerization, radiation vulcanization, and destruction.