[ak′sep·təns ‚sam·pliŋ]
(industrial engineering)
Taking a sample from a batch of material to inspect for determining whether the entire lot will be accepted or rejected.
McGraw-Hill Dictionary of Scientific & Technical Terms, 6E, Copyright © 2003 by The McGraw-Hill Companies, Inc.
The following article is from The Great Soviet Encyclopedia (1979). It might be outdated or ideologically biased.

Acceptance sampling is conducted on the basis of a reference standard, or system of inspection rules. These rules prescribe the use of a certain sampling plan depending on such factors as the number of items in the lot that is being checked, the results of the inspection of earlier lots, and the laboriousness of the inspection. The chief method of selecting items for inspection is random sampling without replacement, where the items for inspection are chosen at random and any possible sample composition has an equal probability. Other methods of sampling are also occasionally used.

If the items are classified as nondefective or defective as a result of the inspection, we speak of sampling by attributes. In practice, single sampling plans by attributes are widely used in acceptance sampling. Such plans are defined by specifying the sample size—the number n of items selected for inspection—and the acceptance number c. The significance of c is that if d—the number of defective items found in the sample—is greater than c, the lot is rejected; if, however, d ≤ c, the lot is accepted. Sometimes it is advisable to use double sampling plans by attributes. The plans are defined by the sizes n1 and n2 of the first and second samples, respectively. If d1—the number of defective items found in the first sample—is not greater than c1, the lot is accepted; but if d1 ≥ r1 (r1 > c1), it is rejected. When c1 < d1 < r1, a second sample containing n2 items is taken. If the total number of defective units d1 + d2 is not greater than c2, the lot is accepted; if d1 + d2 > c2, it is rejected. Multiple, sequential, or other types of sampling plans are recommended in some cases.

Under some production conditions, rejection of a lot entails inspection of all items in the lot in order to eliminate all defective articles from it; in other cases rejection means destroying the items or using the items as raw material to be recycled back into production—metal products, for example, may be melted down. With acceptance sampling the decision to accept or reject is made on the basis of an inspection of just some randomly selected items. The probability of accepting lots with defective items is, therefore, never zero. When, as in tensile tests, the inspection has a destructive character, acceptance sampling is the only possible method of acceptance control. If the properties of the articles do not change during inspection, total inspection is theoretically possible. A careful sampling inspection may produce more objective results than the necessarily less careful (owing to the larger amount of work) total inspection. 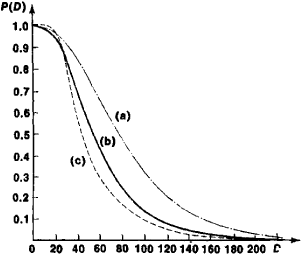 what types of plans are advisable for inspecting mass-produced products. Switching from inspection with single sampling plans to more complicated plans may decrease the probability of mistakenly accepting lots that contain a large number of defective units (see Figure 1). Plans that are not of the single sampling type, however, present more difficulties with respect both to their realization and to their use as a basis for statistical estimates of the level of quality of a mass-produced product.

is the probability of detecting d defective items in a sample of size n from a lot containing N items, and

The cost indexes of the inspection can be used as the basis for selecting sampling plans for a series of lots. The expenses involved in acceptance sampling is the sum of the expense of inspecting the items that make up the sample and the loss from the rejection of nondefective items in the lot. The sum of expenses may also include the losses from defective items that are accepted.

The reference standards for acceptance sampling give correction rules that define the transition from normal inspection to tighter inspection and back. For example, when two of the last ten lots inspected are rejected, some reference standards recommended switching to plans with smaller values for the operating characteristic. Such a transition can be made by reducing the values of acceptance numbers or increasing sample sizes.

The inspection results can be used to obtain successive estimates for the number of defective items submitted and accepted and also for other indexes of the effectiveness of acceptance sampling. A. N. Kolmogorov has proposed methods for constructing successive estimates.

Sampling by variables can be illustrated by the following example. Suppose that items are defined as nondefective if a certain dimension z is not greater than a. From the lot, we select randomly four articles, whose values for dimension z are z1, z2, z3, and z4. The lot is accepted if a —z̄ ≥ 2.5s where z̄ = (z1 + z2 + z3 + z4)/4 and

Otherwise, the lot is rejected.