1. the ceremonial gesture used to confer knighthood, originally an embrace, now a touch on the shoulder with a sword
2. Architect a curved ornamental moulding, esp one having the shape of an ogee arch

A rich ornamental treatment made up of two ogee curves meeting in the middle, as found over a door, window, or arch.

[′ak·ə‚läd or lād]
(architecture)
Decorative molding in which two ogee curves meet centrally over the top of a window or door. 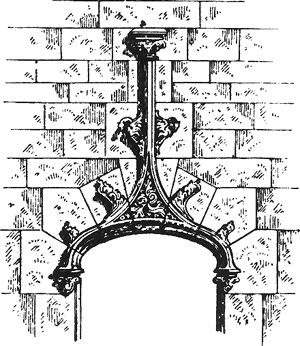 accolade
An ornamental treatment, used over an arch, a door, or a window, composed of two ogee curves meeting in the middle; often a richly decorated molding.