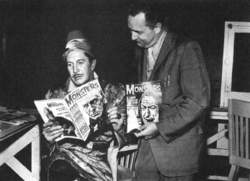 Forrest Ackerman (right), with Vincent Price reading the magazine he founded and wrote for: Famous Monsters of Filmland.

Forrest James Ackerman, (generally referred to simply as “Forrest J Ackerman” with no period after the middle initial) science fiction and horror fiction writer and editor, was born on November 24, 1916, in Los Angeles, the son of Carroll Cridland Wyman and William Schilling Ackerman. After attending the University of California at Berkeley for a year (1934–35), Ackerman held a variety of jobs and spent three years in the U.S. Army before founding the Ackerman Science Fiction Agency in 1947. By that time, he had been a science fiction fan for many years and in 1932 had been a co-founder of The Time Travelers, the first science fiction fanzine. He was a charter member of the Los Angeles chapter of the Science Fiction League, an early fan club, and attended the first science fiction fan convention in 1939.

Since that time he spent his life promoting the science fiction and horror genres in both print and film media. That lifetime of work earned him a special place in the world of science fiction as a behind-the-scenes mover and shaker in the development of the field. Besides writing numerous fiction and nonfiction articles, Ackerman worked as the literary agent for a number of science fiction writers. Along the way he amassed an impressive collection of genre literature and artifacts that were housed at his Hollywood home, lovingly dubbed the Ackermansion. Among his prized artifacts were a Dracula ring worn by Bela Lugosi as Count Dracula; Bela Lugosi’s robe worn in the movie The Raven; a cape made for Bela Lugosi in 1932 and subsequently worn by him in his stage portrayal of Dracula (the cape was finally worn in Lugosi’s last movie, Plan 9 from Outer Space). He also had a first edition of the novel Dracula, signed by Bram Stoker and with an inscription by Bela Lugosi to Ackerman.

Ackerman is most remembered by the general public as the editor of and main writer for Famous Monsters of Filmland, an important fan magazine that emerged in 1958 as monster movies were becoming recognized as a separate genre of film with its own peculiar audience. During the 20 years of its existence, the magazine filled a void for the growing legion of horror and monster movie fans. Up to this time, there were no vampire fan clubs or periodicals. Ackerman sold the idea of Famous Monsters to publisher James Warren. The first issue was released as a one-time publication, but the response was far beyond what either had imagined. It soon became a periodical. In the first article of the premier issue, “Monsters Are Good for You,” Dr. Acula (one of Ackerman’s pseudonyms) suggested, “A vampire a day keeps the doctor away.” Ackerman made broad contributions to the larger science fiction and horror field while furthering the development of the vampire in popular culture. He regularly featured vampire movies and personalities—though they shared space with other monsters—on the pages of Famous Monsters. He edited and authored a number of books including an important vampire title, London After Midnight Revisited (1981), a volume about the famous original vampire feature directed by Tod Browning. More recently, he put together several retrospective volumes on Famous Monsters of Filmland. He appeared in some 210 genre movies, mostly in cameo parts, including two vampire films, Queen of Blood (1966) and Dracula vs. Frankenstein (1971).

Possibly his most significant contribution to the vampire field was the creation of Vampirella. Ackerman partly developed the idea of Vampirella, a sexy young vampire from outer space, from the movie character Barbarella, who was created by Roger Vadim and portrayed by Jane Fonda (Vadim’s wife at the time). The first issue of the Vampirella comic book appeared in 1969 and went on to become the most successful vampire comic book ever. It ran for 112 issues and, revived in the 1990s by Harris Comics, again became a top seller.

In 1953 he was given the first Hugo Award as science fiction’s number one fan personality. He was awarded the Ann Radcliffe Award from the The Dracula Society in 1963 and again in 1966. In 1997, Ackerman’s lifetime of service to fandom was recognized with a special award at the Dracula ‘97: A Centennial Celebration in Los Angeles. Ackerman spent much of the last years of his long life attending various fan conventions where he spoke of his many adventures in fandom, listened to numerous reviews of his work, and received adulations for his promotion of science fiction and horror. In 2008, word of failing health circulated on the Internet, and he passed away from congestive heath failure in Los Angeles on December 4, 2008. In April 2009, a massive auction of his collection, including the Dracula related items, was held as part of the annual auction of Hollywood memorabilia by Profiles in History.