the production of a visible image by means of sound from an object located in an optically opaque medium. It is based on the penetrating capability of sound—and particularly of ultrasound—together with their visualization. The elastic vibrations used in acousto-optical imaging are usually in the frequency range from 10 kilohertz (kHz) to 100 megahertz (MHz) or higher.

Ultrasonic waves pass readily through metals, plastics, most construction materials, living tissues, and fluids. The reflection and refraction of ultrasonic rays from a solid-gas interface (the result of differences between the propagation velocities in different mediums) may be used to observe solids and gas bubbles in fluids and living tissues, as well as cracks, pits, and cavities in solids, so that the structure and geometry of internal inhomogeneities in optically opaque bodies can be studied and monitored. Acousto-optical imaging has an advantage, for example, over roentgenoscopy, because ultrasound is easily focused by acoustic lenses and mirrors into narrow beams or rays within a restricted space, whereas X rays, which have a high penetrating capability, are virtually impossible to focus. The image produced in roentgenoscopy is only a shadowy silhouette. There is no effective way to observe a cleavage several microns thick in a metal sheet 5 mm thick by means of X rays, but when an ultrasonic ray is reflected from the metal-gas interface, such cleavages are clearly depicted. A kidney stone 2 mm in size is nearly indistinguishable with X rays, but acousto-optical imaging reveals it very distinctly.

An acousto-optical imaging system (Figure l,a) usually consists of an ultrasonic source, the object being observed, an acoustic lens (which serves to form the ultrasonic image), and a device for converting the image into an optically visible image. 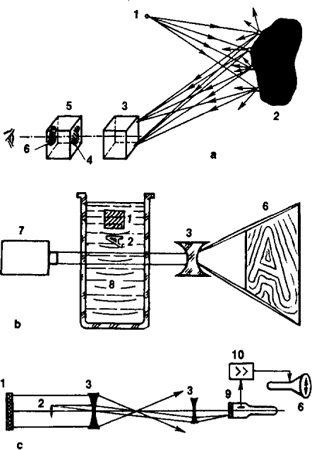 A method of acousto-optical imaging based on the properties of freely suspended fine metallic plates that rotate into the plane perpendicular to the direction of ultrasonic propagation is also used. The test object is placed in a vessel containing an ultrasonic source and a fluid in which the plates are floating. The plates, which have been reoriented according to the intensity distribution of ultrasound (acoustic radiation pressure) that has passed through the test object, are illuminated by a beam of parallel rays and thus form a bright image against a gray background.

A device for producing a visible image by using the diffraction of a laser beam on an ultrasonic wave that has passed through the test object is shown in Figure 1 ,b. The laser beam formed by an optical system passes through a fluid in which the object is located. The index of refraction of a fluid irradiated by ultrasound varies in such a manner that an optical beam, in passing through the fluid, creates on a screen diffraction fringes containing the image of the object.

Acousto-optical imaging systems using the visualization methods described above have a sensitivity of the order of 1–0.01 watts per sq cm (W/cm2). However, much greater sensitivity is necessary for many practical applications. This requirement is satisfied by electroacoustic image converters, with a sensitivity of 10-9 to 10-10 W/cm2. The Soviet scientist S. la. Sokolov (1936) was the first to indicate the possibility of converting an ultrasonic image into an optically visible image by means of cathode-ray tubes. The development of methods for the visualization of ultrasonic fields and the improvement of acousto-optical imaging apparatus, particularly the development of high-sensitivity electroacoustic image converters, has led to the creation of tksonoscopes” (Figure l,c) for use in flaw detection, medical diagnosis, construction work, and underwater navigation.

An example of practical acousto-optical imaging is the surface relief method, in which an ultrasonic image of a test object is recreated on the free surface of a liquid. A ripple is formed by the action of ultrasound on the surface of the liquid (for example, water); it is easily viewed with oblique illumination (Figure 2). Equipment for the detection of cleavages and cracks in sheet material operates on this principle. The test sheet is placed in a water tank over an irradiating ultrasonic “projector,” and an acoustic lens located above the sheet focuses the sound image of the flaws on to the surface of the water. 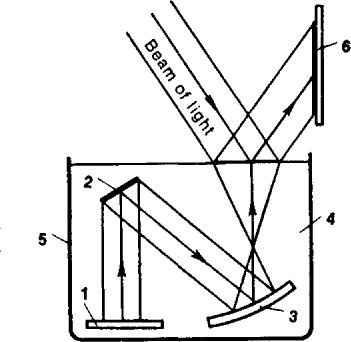