1 Informal
Chiefly US a professional politician who controls a party machine or political organization, often using devious or illegal methods

2
1. Biology any of various protuberances or swellings in plants and animals
2.
a. an area of increased thickness, usually cylindrical, that strengthens or provides room for a locating device on a shaft, hub of a wheel, etc
b. a similar projection around a hole in a casting or fabricated component
3. an exposed rounded mass of igneous or metamorphic rock, esp the uppermost part of an underlying batholith

A projecting ornament, usually richly carved and placed at the intersection of ribs, groins, beams, or at the termination of a molding.

(2) In the USA this term is also used for persons who head the apparatus of the Republican and Democratic parties in states and cities. Acting in the interests of monopolies, bosses frequently resort to bribes, threats, and blackmail during election campaigns in order to ensure the victory of candidates suitable to them.

What does it mean when you dream about your boss?

[bȯs]
(design engineering)
Protuberance on a cast metal or plastic part to add strength, facilitate assembly, provide for fastenings, or so forth.
(geology)
A large, irregular mass of crystalline igneous rock that formed some distance below the surface but is now exposed by denudation.
(naval architecture)
bossing 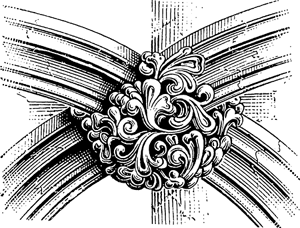 boss, 1
1. A projecting, usually richly carved ornament placed at the intersection of ribs, groins, beams, etc., or at the termination of a molding.
2. In masonry, a roughly shaped stone set to project for carving in place.
3. To hammer sheet metal to conform to an irregular surface.
4. A protuberance on a pipe, fitting, or part designed to add strength, to facilitate alignment during assembly, to provide for fastenings, etc.

(1) (Open Source Software) Software that can be modified and recompiled by the user. See open source.

Feedback
Flashcards & Bookmarks ?
Please log in or register to use Flashcards and Bookmarks. You can also log in with
Flashcards ?
My bookmarks ?
+ Add current page to bookmarks
TheFreeDictionary presents:
Write what you mean clearly and correctly.
Mentioned in ?
References in periodicals archive ?
Acting boss Mike Rush - whose only two defeats in 10 matches in charge have been against Wigan - recalls Ade Gardner and Andy Dixon.
St Helens v Wigan 6pm
Berwick ..........0 Clyde ...............2 BERWICK'S four-match unbeaten run under acting boss Ian Little ended as Clyde grabbed only their second away win of the season in the league.
Defeat's a Little too soon
During the time of his son's disappearance, Dom Cirillo, who was at one time the acting boss of the Genovese family, refused to cooperate with the police.
Massino testimony sheds light of mysterious disappearance of Nick Cirillo
Acting boss Chris Turner has already signed two loan strikers in the transfer window and another will arrive at Victoria Park.
Pools line up new striker
The plant's acting boss Robin Rigby has refused to comment.
Jobs axe fears at parts plant
Acting boss David Pleat said, 'I'm pleased to say that Jamie is alive and kicking and back to his old enthusiastic self.
Hotshot Keane is gunning for Everton
The experienced defender, who was previously manager of Oswestry Town and is now linked with The Oval vacancy,has reported fit and joins the squad selected by acting boss Wayne Phillips.
Football: Captain Norman in Canaries comeback; WELSH PREMIER
Acting boss David Pleat has urged Tottenham's players to show pride in a match which will provide memories of an upset.
Football: David Pleat's message to Tottenham
They must really fancy catching acting boss Phil Thompson's team on the rebound from a 4-0 mauling with Michael Owen fit to rumble again!
BOYCIE THE BOOKIE: It's G-Owen to be painful for Gunners; The inside track on sports betting
Liverpool acting boss Phil Thompson, a little extravagant in his claims that his side had deserved to win, was right when he said: "We can now go on and get through.
Roma in a rage as Reds stand firm
Giants acting boss Phil Veivers said: "There is a lot of respect amongst the boys for Schoey both as a guy and as a coach and they'll want to put on a show for him on Friday.
Rugby League: Giants to strike with handy 10 start
In a later meeting with Black, Okore is then said to have told the acting boss not to bother picking him in the remaining four matches.
Okore 'doesn't want to play after sub snub'