The Hebrew scriptures (the Christian Old Testament) often use the term malakh, meaning "messenger," to refer to the beings we call angels. Writing in Greek, the authors of Christian scripture called these beings angelos, a Greek term meaning "messenger" or "herald." This word eventually passed into the English language as "angel." Although the word "angelos" denoted an ordinary, human messenger, biblical authors selected it over another available Greek term, daimon, which referred to a guardian spirit. Perhaps they discarded this term because Greek lore taught that the daimon exercised both good and evil influences over people. Eventually, the Greek word "daimon" passed into the English language as "demon."

The angels of biblical tradition frequently acted as messengers. In fact, angels served this function in both scriptural accounts of Jesus' birth. In Matthew's account of the Nativity an angel appeared to Joseph on three separate occasions. The first time the angel came to explain the nature of Mary's pregnancy. Later, an angel warned Joseph of Herod's evil intentions concerning Jesus and advised him to flee into Egypt (see also Flight into Egypt; Holy Innocents' Day). An angel returned one final time to inform Joseph of Herod's death and to command his return to Israel. In Luke's account of the Nativity, the angel Gabriel visited Mary to inform her that she would bear a child by the Holy Spirit. On the night of Jesus' birth an angel appeared to shepherds in a nearby field to announce the glorious event. Then a "multitude" of angels suddenly materialized behind the first angel, singing praises to God.

With so many angels involved in orchestrating the events surrounding Jesus' birth, it is no wonder that they became a symbol of the Christmas holiday. Today's Christmas angels frequently appear as winged human beings in flowing white robes with somewhat feminine faces and haloes. This image evolved over the course of two millennia.

The very first Christian depictions of angels date back to the time of the Roman Empire. Early Christian paintings of angels rendered them as ordinary men rather than as winged, spiritual beings. Some artists, however, garbed their angels in white robes, resembling a Roman senator's toga, in order to symbolize their power and dignity. The first winged angels appeared in the fourth century. Some scholars believe that early Christian artists patterned the image of winged angels after the Greek goddess Nike, the winged, female spirit of victory. Others trace this image back even further to winged spirits associated with the religion of ancient Babylon. By the fifth century Christian artists from the Byzantine Empire began to depict angels with a disk of light, called a nimbus, behind their heads. This nimbus, or halo, signifies holiness, purity, and spiritual power.

In medieval times most western European artists portrayed angels as masculine in face and form. This trend reversed itself from the fourteenth to the sixteenth centuries. After that time, western European angels acquired softer, more feminine, or androgynous, looks. Sometimes they appeared as chubby children or toddlers. Artists often depicted angels with harps or other musical instruments. These emblems signify what some consider to be the primary occupation of angels - praising God.

in Judaic, Christian, Muslim, and several other mythologies, intermediary beings between God and people. Angels act as mediators between them. Old Testament notions about angels, which date back apparently to polytheistic beliefs and partially to Assyrian-Babylonian mythological images, were accepted in the New Testament and became one of the fundamental elements of Christian mythology. According to this mythology, angels are immortal and powerful and have knowledge of the future, although there are limits to both their power and their knowledge. Late Judaic and Christian mythologies contain concepts of “fallen angels” who are led by the devil, or Satan, and urge people to sin.

In late Judaic religion, there developed a differentiation of angels which was further developed in Christian mythology; cherubim, seraphim, and four angel princes (archangels) were distinguished. In Christian mythology, the most venerated were the archangels Michael—the leader of the heavenly host; Gabriel—the herald of God, who, according to the Gospel, informed Mary about the coming birth of Christ; Raphael—the healer; and Uriel—the angel of repentance. The function of representing people before God on Judgment Day is ascribed to the archangels. One of the founders of Christian mysticism, the Byzantine theologian Pseudo-Dionysius Areopagite (fourth century), developed a hierarchy of angels—choirs (“ranks”) of angels—by analogy with the division of Byzantine court ranks into nine orders. The higher orders of angels, to which the seraphim and cherubim belonged, were thought to stand extremely close to God; the lower, to man. Christian art initially portrayed angels in human form; toward the end of the fourth century, when the idea of angels as incorporeal beings was sanctioned, they came to be depicted with wings.

In Muslim mythology, there are four archangels (muqarrabun): Jibril, Michael, Israfil (the herald of the Day of Reckoning), and Azroel (the Archangel of Death). 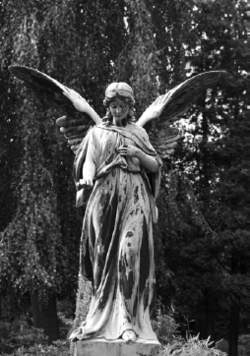 Angels, a common part of religious philosophy and spirituality, are frequent images experienced in dreams.

Angels are spiritual beings that serve as intermediaries between God and humanity. They are common in Western, monotheistic religions where God is conceived of as being so elevated that He does not intervene directly in the world. Angels are often pictured as delivering messages to mortals, or in other ways carrying out God’s will. For example, shortly after Joseph was told by Mary that she was pregnant, he had a dream in which the angel Gabriel appeared to him and said, “Joseph son of David, do not be afraid to take Mary home as your wife, because what is conceived in her is from the Holy Spirit. She will give birth to a son, and you are to give him the name Jesus, because he will save his people from their sins” (Matt. 1:20–21). This dream convinced Joseph not to break his engagement with Mary. While angels sometimes deliver their messages to recipients in the daytime, they more frequently communicate with human beings through dreams during sleep.

Angels symbolize purity and goodness. They are also thought of as protectors and guides. Traditionally, they are conceived of as messengers of God to humanity. In psychological terms, one may think of them as messengers from the unconscious or the higher self. If an angel (who in a dream may simply be a figure clothed in white) conveys a message to the dreamer, it is an indication that the message is important and that one should pay careful attention to it.

i. Atmospheric scatterers like water droplets in the form of clouds or rain, which cause clutter on the radar. These give the impression of targets with considerable depth, sometimes moving at quite high velocities. This is due to abnormal reflections, which return the radar beam to the ground and provide images of ground spots that appear to move at a velocity twice that of the atmosphere or wind velocity. Large numbers of angels are observed under conditions of abnormal propagation.
ii. A term used in military air traffic control to indicate height in thousands of feet above mean sea level. Angels 5 means the aircraft is flying at 5000 ft. Angels “three two” means 32,000 ft. The height is given in angels if QNH (atmospheric pressure reduced to sea level pressure) is set on the altimeter and in flight levels when there is a standard altimeter setting.
An Illustrated Dictionary of Aviation Copyright © 2005 by The McGraw-Hill Companies, Inc. All rights reserved