a basic industrial apparatus for carrying out adsorption. Batch adsorbers and continuous adsorbers are available.

In a batch adsorber the gaseous mixture or liquid from which various components are to be extracted enters the adsorber (Figure 1) through the top intake pipe, passes through the bed of porous adsorbent, which is supported on a horizontal screen, and is withdrawn from the apparatus 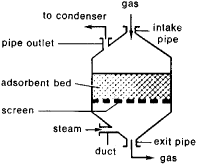 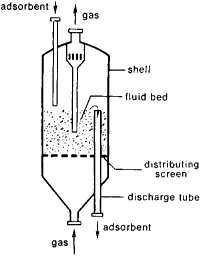 through the bottom exit pipe. Desorption sets in after the adsorbent bed reaches saturation, which is determined by the breakthrough of the gas or liquid being absorbed. The adsorbent bed is heated by steam, which enters through a duct, so that the gases of the extracted materials are forced out of the adsorbent bed through a pipe outlet for condensation and further processing. The adsorbent is then dried by hot gas and the process resumes after the equipment cools off.

In continuous adsorbers, known as hypersorbers, a granular adsorbent travels down a vertical tower with adsorption occurring in the top of the tower and desorption produced by heating taking place in the bottom of the tower.

In additon to hypersorbers, continuous adsorbers with a fluidized adsorbent, as in Figure 2, are also used. The walls of the single-stage adsorber supports a distributing screen through which the gas moves upward and converts the fine granular adsorbent into a fluid bed. The adsorbent moves continually upward and is removed through the discharge tube for desorption.

Feedback
Flashcards & Bookmarks ?
Please log in or register to use Flashcards and Bookmarks. You can also log in with
Flashcards ?
My bookmarks ?
+ Add current page to bookmarks
Mentioned in ?
References in periodicals archive ?
The sampling positions of H-3 in HPS of HTR-PM are marked as sampling points A, B, and C, corresponding to the positions at the entrance of the HPS after the dust filter, at the outlet of the copper oxide bed, and at the outlet of the molecular sieve adsorber, respectively.
Source Term Study on Tritium in HTR-PM: Theoretical Calculations and Experimental Design
Koskenkari, "A new endotoxin adsorber in septic shock: observational case series," Blood Purification, vol.
Immunomodulation in sepsis: the role of endotoxin removal by polymyxin B-immobilized cartridge
El carbon activado es un adsorbente universal que ha sido empleado para adsorber diferentes tipos de compuestos, pero debido a que puede tambien adsorber la humedad del ambiente, este se satura cuando la humedad relativa es alta y ya no puede adsorber mayor cantidad de algun otro compuesto (Tovar y Valdivia, 1999; NOM-050-STPS-1993).
Use of an organic clay as packing material for a toluene-contaminated air filter/Uso de una arcilla organica como material de empaque de un filtro para depurar aire contaminado con tolueno/Uso de uma argila organica como material da carcaca de um filtro para depurar ar contaminado com tolueno
At the beginning of the third step, the adsorber is disconnected from the condenser.
Adsorption refrigeration: new opportunities for solar
The performance of the adsorber and its connected heat exchanger varies periodically as the system operates.
Waste heat powered adsorption system to provide air conditioning for heavy-duty vehicles
The most crucial and complex part in this prototype is the adsorbers. CATIA 3D, a graphic software was used to design the adsorber.
Experimental study of an automobile exhaust heat-driven adsorption air-conditioning laboratory prototype by using palm activated carbon-methanol
where [R.sub.a] is the bed resistance measured in He and [R.sub.g] is the bed resistance measured after the [C.sub.3][H.sub.6] had broken through the adsorber. The electrical resistance of granular metal oxide exposed to reducing gas is inversely proportional to the electrical conductivity and is modelled based on the inter-granular contact resistance model (Madou and Morrison, 1989).
Conductivity of a fixed bed adsorber during propylene adsorption and breakthrough
The new 2007 Dodge Ram Heavy Duty engine uses a diesel particulate filter (DPF) to virtually eliminate particulate matter emissions and an adsorber catalyst to reduce oxides of nitrogen (NOx) by as much as 90 percent.
Chrysler's New Dodge Ram Heavy Duty Diesel 'Cleanest' on the Market