adsorption, adhesion of the molecules of liquids, gases, and dissolved substances to the surfaces of solids, as opposed to absorption, in which the molecules actually enter the absorbing medium (see adhesion and cohesion). Certain solids have the power to adsorb great quantities of gases. Charcoal, for example, which has a great surface area because of its porous nature, adsorbs large volumes of gases, including most of the poisonous ones, and is therefore used in gas masks. Certain finely divided solids have great adsorptive properties; for example, minute particles of platinum attract and hold multitudes of hydrogen molecules on their surfaces. Its ability to adsorb other gases makes platinum very useful in the production of sulfuric acid by the contact process and in the preparation of ammonia. Adsorption occurs also in solutions; colloidal particles suspended in a solution may adsorb much of the solvent (see colloid). Bone black and charcoal are used in industry to remove colors from solutions, since they adsorb many coloring materials and carry these with them when separated from the solution. Liquid dye held to the surface of cloth by adsorption permeates the fibers so that when the liquid has evaporated the dye still remains. Adsorption is employed in the hydrogenation of oils, in gas analysis, and in chromatography, a method used in the chemical analysis of closely related substances.
The Columbia Electronic Encyclopedia™ Copyright © 2022, Columbia University Press. Licensed from Columbia University Press. All rights reserved.
The following article is from The Great Soviet Encyclopedia (1979). It might be outdated or ideologically biased.

absorption of some substances from a gaseous medium or solution by the surface layer of a liquid or solid. For example, if a piece of charcoal is immersed in an aqueous solution of acetic acid, the amount of acid in the solution will decrease and the acid molecules will become concentrated at the surface of the charcoal. Adsorption and absorption, the Latin term referring to absorption in the bulk of the solid, are subsumed under the general term sorption.

The phenomenon of adsorption first came under study in the late 18th century by Scheele (1773), though there is no question that adsorption had been used by humanity in practical activities from time immemorial. The theory of adsorption forms a part of the more general theory of multicomponent heterogeneous systems whose foundation was laid by W. Gibbs in 1876. The adsorption phenomenon is intimately related to special properties of the matter in the surface layer. For example, molecules lying on the interface separating liquid and vapor phases are drawn into the interior of the liquid, so that the bulk liquid molecules exert a stronger attraction on the adsorbing molecules than do the vapor molecules whose concentration is far below that of the liquid. This internal attraction causes the surface to contract, and is characterized quantitatively by surface tension. Molecules of some substance found near the surface become attracted to that surface for the same reason, with adsorption resulting. After adsorption has occurred, the internal attraction is compensated partially by attraction exerted by the adsorption layer, and the surface tension slackens. Gibbs derived a formula linking the adsorption to the variation in surface tension. Those substances whose surface tension is greatly lessened by adsorption are known as surface-active substances, or surfactants.

The time the molecule remains on the surface is known as the adsorption time. Adsorption times vary over a wide range. The rate of adsorption or desorption is a term for the number of molecules adsorbed (desorbed) in unit time, both rates referring to a unit surface area or a unit mass of adsorbent. The rate of chemisorption, like the rate of any chemical process, most often increases with increasing temperature; this is known as activated adsorption. If the rates of adsorption and desorption are equal, adsorption equilibrium is said to occur. In a state of equilibrium, the number of adsorbed molecules remains constant so long as the external conditions—pressure, temperature, etc. —remain unaltered.

The adsorbed molecules not only move laterally over the surface of the adsorbent, but also vibrate, sometimes moving closer to the surface, sometimes further away. The higher the temperature, the more intense the vibratory motion and hence the more likely that the bond between the molecules and the surface will be disrupted during those vibrations, resulting in desorption of the molecule. This means that the adsorption time shortens and the equilibrium number of adsorbed molecules diminishes with increasing temperature. 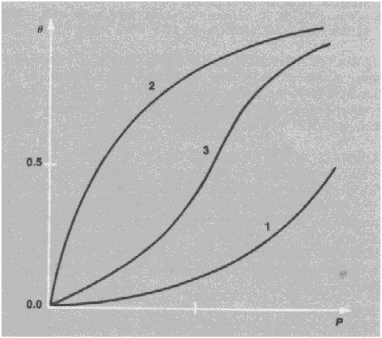 Figure 1 Typical isotherms of monomolecular adsorption on a homogeneous surface

If the adsorbate covers the surface with a layer one molecule thick (monolayer), the term monomolecular adsorption is applied. The simplest isotherm of monomolecular adsorption is a straight line emerging from the origin of coordinates when the pressure P exerted by the adsorbate is plotted as abscissa and the degree of coverage Θ on the surface (that is, the fraction of the surface covered by the adsorbed molecules) is plotted as ordinate. This is known as the Henry isotherm: Θ = kP. The proportionality factor k depends mainly on the temperature and on the nature of the adsorbent and adsorbate interaction.

The Henry equation is valid at very low coverages, in the case of a homogeneous surface. As the coverage increases, interaction between the adsorbed molecules begins to play an increasing role, as does the intensity of their surface mobility. If the adsorbate molecules are attracted to each other, then each newly adsorbed molecule will experience attraction by both the adsorbent and the molecules already adsorbed. As coverage increases, then, the forces acting to retain the adsorbed molecules will increase, and the conditions favoring adsorption will be continually enhanced. In that case the isotherm will climb upward more and more steeply (see Figure 1, curve 1) with increasing pressure. But as the surface becomes covered, it becomes increasingly difficult for molecules being newly adsorbed to find space—not already occupied by adsorbing molecules—on the surface. Thus, while the pressure increases, adsorption slows down and the degree of coverage tends to a constant value of unity (see Figure 1, curve 2, which is characteristic in the absence of mutual attraction between adsorbed molecules). If both of these factors are operating, then concave-convex isotherms result (see Figure 1, curve 3).

Here a is the adsorption coefficient similar in its physical meaning to the Henry constant k. The Langmuir equation is valid for monomolecular adsorption on a homogeneous surface, if mutual attraction of adsorbing molecules and the mobility of adsorbed molecules over the surface can be safely neglected.

When the pressure is increased still further, the second and third layers, and so on, become filled; that is, polymolecular adsorption results. If the adsorbent has narrow pores and is wetted by the adsorbate, then condensation can occur in the pores at pressure lower than the saturated vapor pressure of the adsorbate. This is the phenomenon of capillary condensation. The surface of solid adsorbents is most often inhomogeneous in its adsorptive properties: some portions of the surface adsorb more vigorously, other portions less so. Adsorption prevails on the most active portions of the surface at low pressures, while the less active portions become filled with increasing pressure. Strictly speaking, however, adsorption takes place simultaneously over the entire surface, and the experimental isotherm is made up of a sum of isotherms, each of which corresponds to a specific type of surface. As a consequence, the experimental isotherms of monomolecular adsorption can differ appreciably from the curves shown in Figure 1.

Adsorption plays an important role in energy transfer between gases, liquids, and solids. For example, gas molecules becoming adsorbed on a hot surface acquire energy corresponding to the temperature of the surface and after desorption transfer that energy to other gas molecules, thereby heating up the gas. This is not the sole mechanism acting in heat transfer but is nonetheless an important one.

Adsorption is one of the decisive factors in the stabilization of colloidal systems and one of the major reaction steps occurring in heterogeneous systems, specifically in heterogeneous catalysis. In biological systems, adsorption is the first stage in the absorption of submicroscopic colloidal structures, organelles, cells, and tissues of various substances from the surroundings. The functioning of biological membranes, the first stages in the interaction of enzymes with substrate, protective reactions against toxic substances, and intake processes are all associated with adsorption. Many adsorbents—for example, activated charcoal, kaolin, and ion exchange resins—act as antidotes, absorbing harmful substances that enter the gastrointestinal tract and removing them from the organism. Adsorption is used in order to separate gaseous and liquid mixtures and to dry and purify gases and liquids—for example, to decontaminate air in gas masks. One of the oldest applications of adsorption is in purifying wine. The chromatographic method of analysis, based on the differential adsorption of components in a mixture, has acquired great importance in science and industry. Adsorption is also used to isolate and purify biologically active substances, such as vitamins, enzymes, hormones, and antibiotics.

Adsorption of dye molecules is important in dyeing fabrics and in the printing industry. Adsorbents are used as fillers in the production of polymers. In vacuum engineering, adsorption on the walls of equipment being evacuated slows down the pumping speed and degrades the vacuum, but the adsorption phenomenon nevertheless is utilized in the operation of various adsorption pumps. In the electronics industry, adsorption is used to stabilize the electrical properties of semiconducting devices. Adsorption plays an important role in general in all phenomena and processes where surface properties are essential.

[ad′sȯrp·shən]
(chemistry)
The surface retention of solid, liquid, or gas molecules, atoms, or ions by a solid or liquid, as opposed to absorbtion, the penetration of substances into the bulk of the solid or liquid.
McGraw-Hill Dictionary of Scientific & Technical Terms, 6E, Copyright © 2003 by The McGraw-Hill Companies, Inc.

The action of a material in extracting a substance from the atmosphere (or a mixture of gases and liquids) and gathering it on the surface in a condensed layer; the process is not accompanied by physical or chemical change.
McGraw-Hill Dictionary of Architecture and Construction. Copyright © 2003 by McGraw-Hill Companies, Inc.