Zeus (zo͞os), in Greek religion and mythology, son and successor of Kronos as supreme god. His mother, Rhea, immediately after his birth concealed him from Kronos, who, because he was fated to be overthrown by one of his children, ate all his offspring. Rhea gave him a stone wrapped in swaddling clothes which he devoured immediately, not suspecting that the infant Zeus still lived. Later, Zeus tricked Kronos into disgorging his brothers and sisters and led them in a successful revolt against their father (see Titan). When lots were cast to divide the universe, the underworld went to Hades, the sea to Poseidon, and the heavens and earth to Zeus. Zeus was an amorous god. His first mate was probably Dione, but his official consort was his sister, Hera, who bore him Ares and Hebe. Zeus also loved Themis, Eurynome, Demeter, Mnemosyne, Leto, and Maia and fathered many gods. Famous among his mortal loves were Danaë, Leda, Semele, Thetis, Io, and Europa. His sons sired from mortal wives include Hercules, Dardanus, and Amphitryon. He was also the father of Athena, who was said to have sprung from his head. Supreme among the gods, Zeus, ruling from his court on Mt. Olympus, was the symbol of power, rule, and law. As the father god and the upholder of morality, he rewarded the good and punished the evil. The root meaning of Zeus is “bright” or “sky,” and in this sense he was god of weather and fertility. Thus he was worshiped in connection with almost every aspect of life. The most famous weapon of Zeus was the thunderbolt, but, according to some legends, he also possessed the aegis. The Romans equated Zeus with their own supreme god, Jupiter (or Jove). 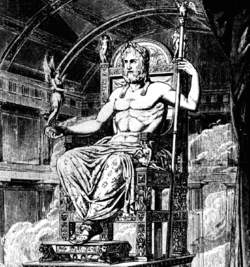 the supreme god of the ancient Greeks, who became ruler of gods and men after he dethroned his father Cronus and defeated the Titans. He was the husband of his sister Hera and father by her and others of many gods, demigods, and mortals. He wielded thunderbolts and ruled the heavens, while his brothers Poseidon and Hades ruled the sea and underworld respectively
Collins Discovery Encyclopedia, 1st edition © HarperCollins Publishers 2005