When a photographic strip is laid out, part of the locality photographed on a single plate must also be photographed on another plate. The ratio of the area photographed on two adjacent plates to the area represented in each separate plate (expressed in percent) is termed the longitudinal overlap. This overlap is specified to conform with the requirements of subsequent photogrammetric reduction of the data (longitudinal overlap is usually 60 percent). When a region of considerable breadth is to be surveyed aerially, the area is photographed in a series of parallel strips with some transverse overlap (usually 30 percent). The height of flight relative to the locality to be surveyed, the focal length of the surveying camera, the season and time of day, and the sequencing of the photographic strips are specified beforehand in aerial photographic survey missions.

At each instant during the photographic operation, the center of projection and the plane of the aerial survey plate occupy an arbitrary position because of the mobility of the base. The quantities defining the spatial position of the plate relative to the system of coordinates adopted—called the elements of the external orientation of the plate—include three linear coordinates of the center of projection x8 , y8, and z8, (see Figure 1) and three angles defining the rotation of the plate about the three coordinate axes (these are indicated in Figure 1). 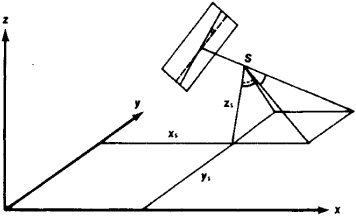 Figure 1. Elements of the external orientation of a photographic plate

In order to determine the spatial coordinates of the points photographed from the aerial survey plates, the elements of external orientation of the plates must be found first; that involves finding the coordinates of certain geodetically specified points that are shown distinctly on the plates. A statoscope (which records the change in flight altitude by changes in air pressure), a radioaltimeter (which determines the height at which the photographic record was taken with respect to the locality surveyed), and radiogeodetic stations (for finding the distance from the surveying aircraft to the stations located on the earth’s surface at points having known geodetic coordinates) are utilized to establish the elements of the external orientation of the aerial survey in flight. These data make it possible to compute the map coordinates of the center of projection. The readings of the vertical gyroscope make it possible to find the angles of inclination of the photographic plate; these can also be determined by processing the plates bearing images of the starry sky, the position of the sun, or the horizon line.

Aerial photographic lenses of high resolving power and low optical distortion and aerial film with high resistance to buckling or deformation are used to improve the quality and precision of the aerial plates in aerial photographic surveying work. The instrumental drop of light over the field of vision must be minimized, the shutter must provide very short exposures (to 1/1,000 sec) in order to minimize blur, and the aerial film must be kept rigorously level in the film plane when the picture is shot. Films commonly used in aerial photographic surveying are black-and-white panchromatic, black-and-white infrachromatic, color, and spectrally zoned film on which the image is produced with shifted color response so that distinct objects stand out more clearly.

Feedback
Flashcards & Bookmarks ?
Please log in or register to use Flashcards and Bookmarks. You can also log in with
Flashcards ?
My bookmarks ?
+ Add current page to bookmarks
Mentioned in ?
References in periodicals archive ?
An aerial photographic survey along 273km was also carried out to record the extent of the flooding in more remote areas.
Rising cost of keeping flood water in check; Levy on councils will finance 28 new projects
Railway bosses made the shock discovery when they commissioned an aerial photographic survey of the 16-mile line by helicopter.
Blow to repairs on flood-hit railway; BEWDLEY: Embankment slippage could hold up vital work on line
Pasco, a major aerial photographic survey company, shot up due to news Tuesday that the company is to sell computer software that assists people find the best way to go home from work in the case of a powerful earthquake.
Nikkei 225 ends above 12,300 for 1st time since August 2001