a technique for determining the height of points on the terrain during an aerial photographic survey; it is based on measurements of the time required for radio transmission to pass from an airplane to the earth’s surface and back. It was developed in the USSR in 1945.

Aerial radio altimetry is accomplished by determining the flight altitude HR with a radio altimeter, and the excess height ΔHP of the airplane over the reference isobaric surface with a statoscope.

The heights of the points AR are obtained in an arbitrary system—from the surface E, which is parallel to the isobaric surface (Figure 1), calculating them by the formulas

where R is a constant value larger than AŔ. In order to determine HR from the readings of the radio altimeter, which measures the distance D from the aircraft (that is, from the projection center 5) to the nearest point M on the 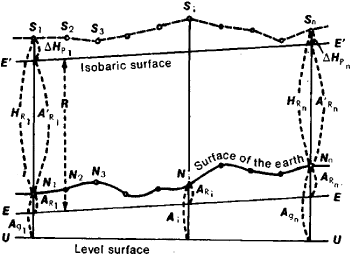 earth’s surface (Figure 2), a correction ΔD is measured from the aerial photographs with a precision stereometer using “stereosphere networks”; then HR = D + ΔD). If the slope of the area is less than 2°, the corrections ΔD are not measured. In order to refer the heights Ag to a level surface, it is necessary to determine the geodesic heights Ag of the nadir points in the aerial photographs (that is, the points N lying on a plumb line) at the start and end of an aerial photographic survey route; then (Figure 1)

The accuracy of aerial radio altimetry aA = ±1.5 m for a route length of 30 to 40 km and H up to 3,500 m over open plains and hilly regions. A dense forest causes an “increase” in height of about half the height of the standing timber, depending on the density of the forest and the trees’ crown development, whereas low and sparse forests have no effect on the measurements. Water surfaces produce a height “increase” of about 3 m. In rocky, mountainous regions aerial radio altimetry is not employed because of the difficulty of determining the point on the terrain from which a given radio signal is reflected.

In Canada and a number of other countries, aerial radio altimetry relies on the combination of a radio altimeter having a narrow directional radiation pattern with a hypsome-ter. This composite instrument (airborne profile recorder) traces a profile of the terrain along the flight route directly on a tape and has an accuracy of approximately half the values mentioned above. Aerial radio altimetry is used in making topographic maps to a scale of 1:25,000 and smaller, 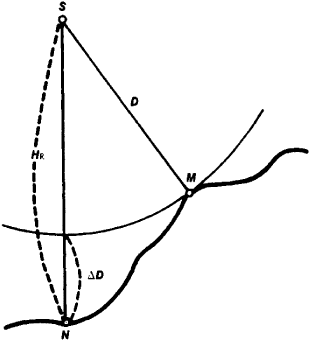 in planning communication routes, and for other engineering purposes.