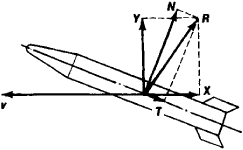 Figure 1. Resolution of the aerodynamic force into components in the flow coordinate system X, Y, Z and in the correlated system T, N, Z; the Z axis is not shown since it is perpendicular to the plane of the drawing

velocity v of the body (flow or velocity coordinate system) or with the body itself (correlated system). In the flow system the force directed along the axis of flow in a direction opposite to the direction of the body’s motion is called the aerodynamic drag X, the force perpendicular to it and lying in a vertical plane is called the lift Y, and the force perpendicular to both of these is called the side, or lateral, force Z. In the correlated coordinate system the first two forces are, by analogy, the tangential T and normal N forces.

The aerodynamic moment plays an important part in the aerodynamic design of aircraft and in determining their stability and controllability, and it is usually given in the form of three components, which are the projections on the coordinate axes associated with the body (Figure 2): L (rolling moment), N (yawing moment), and M (pitching moment). The values are positive when they tend to turn the body from the y-axis to the z-axis, from the z-axis to the jt-axis, and from the x-axis to the y-axis.

Figure 2. Projections of the aerodynamic moment on the coordinate axes: L is the rolling moment, N is the yawing moment, and M is the pitching moment

Feedback
Flashcards & Bookmarks ?
Please log in or register to use Flashcards and Bookmarks. You can also log in with
Flashcards ?
My bookmarks ?
+ Add current page to bookmarks
References in periodicals archive ?
This aerodynamic force and moment difference results in changes in the performance metrics calculated from the QSS simulation results.
High fidelity quasi steady state aerodynamic model development and effects on race vehicle performance predictions
8-9 show the aerodynamic force and moment coefficients on the vehicle with and without the barrier, respectively.
Detached Eddy Simulation of the flow around a simplified vehicle sheltered by wind barrier in transient yaw crosswind
The aerodynamic force and moment due to canard 1, as shown in Figure 2, are given by
Accuracy improvement capability of advanced projectile based on course correction fuze concept
The aerodynamic force and moment of a moving object in the atmosphere are generated by the interaction between the object's surface and the air.
Gust Perturbation Alleviation Control of Small Unmanned Aerial Vehicle Based on Pressure Sensor
Considering that the model uncertainties caused by aerodynamic force and moments merely exist in translational dynamics and rotational dynamics control loops, these two control loops are designed by the INDI method while the other two loops are designed by the NDI method.
VTOL UAV Transition Maneuver Using Incremental Nonlinear Dynamic Inversion
These changes in the aerodynamic force and moments due to presence of microflaps can be used in 6DOF flight dynamic simulations to examine the feasibility of microflaps as control mechanism to provide adequate control authority for projectile control.
CFD Simulations of a Finned Projectile with Microflaps for Flow Control
Encyclopedia browser ?
Full browser ?
CITE
Site: Follow: Share:
Open / Close