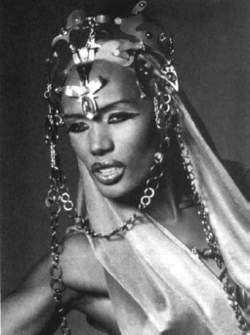 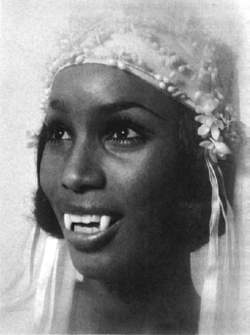 Teresa Graves, who starred in the movie Old Dracula, was one of the first African Americans to be featured in a vampire film.

Vampire beliefs have not been prominent among African Americans, though a few have been reported. These few were seemingly derived from the mythologies of Africa, which believed in both vampires and witches who acted like vampires, and were brought to the United States either directly or by way of Haiti or the other French islands in the Caribbean. Folklorists working among African Americans in the southern United States in the late nineteenth and early twentieth centuries found a number of accounts of vampires. Some were more traditional bloodsuckers. One account from Tennessee told of an old woman whose health seemed to constantly improve while the children’s health declined because she sucked their blood while they slept: “de chillun dies, an’ she keeps on a-livin’.” The most definable vampire figure reported among African Americans was the fifollet, or the feu-follet, known to the residents of Louisiana. The fifollet, the traditional will-o-the-wisp (light seen at night over the swamp areas), derived from the French incubus/succubus figure, was the soul of a dead person that had been sent back to Earth by God to do penance, but instead attacked people. Most of the attacks were mere mischief, but on occasion, the fifollet became a vampire that sucked the blood of people, especially children. Some believed that the fifollet was the soul of a child who had died before baptism.

Modern African American Vampires: Vampires have made only infrequent appearances in African American folklore, and, similarly, African Americans have been largely absent from vampire movies and novels through the twentieth century. The few black vampire movies emerged in the era of blaxploitation movies in the early and mid-1970s. Only one African American vampire character, Prince Mamuwalde (better known as Blacula), attained any fame beyond the fans of vampire movies. The Prince, portrayed by Shakespearean actor William Marshall, appeared in two movies, Blacula (1972) and Scream Blacula Scream (1973). Released the same year as Blacula was Alabama’s Ghost (1972), a blaxploitation movie in which a vampire rock group battles a ghost. Another lesser-known African American vampire movie is the 1973 Ganja and Hess (released in video under a variety of names including Blood Couple, Double Possession, Black Evil, and Black Vampire). Like Blacula, the movie was set in New York. It concerned Dr. Hess Green (played by Duane Jones), who becomes a vampire after being stabbed with an ancient African dagger by his assistant. The vampire never became a prominent role for black actors, however, and with a few notable instances—Teresa Graves in Old Dracula (also known as Vampira) and Grace Jones in Vamp—few have appeared in leading roles.

Meanwhile, in the 1970s, Marv Wolfman, who created the very successful vampire comic series, Tomb of Dracula, included the African American Blade the Vampire Slayer among the major characters. Through the several attempts to revive the series, Blade emerged as the single most popular of Wolfman’s characters and eventually in the mid-1990s got his own Marvel comic book series. As Blade emerged to prominence, the character was altered to more closely conform to the superhero for which Marvel was best known, and his half-vampire nature emphasized. Beginning in 1997 this new Blade, became the subject of three very successful movies starring Wesley Snipes. In the wake of Blade’s success, as the DVD market and independent movie industry expanded, a set of new African American vampire movies, most going straight to DVD, appeared. These latter include Cryptz (2002), Vegas Vampires (2004), Vampiyaz (2004), Vampz (2004), Vampire Assassin (2005), Bloodz Vs Wolvez (2006), and Dead Heist (2007).

Like the new set of vampire movies, some vampire novels were included among the growing number of books written especially for an African American audience. Only a few of these, most notably Jewelle Gomez’s The Gilda Stories (1991), gained a larger audience. Then in 2003, Leslie E. Banks, writing under her pseudonym L. A. Banks, issued Minion, the first of what became her Vampire Huntress books. The series, built around a young African American vampire hunter named Damali, found an audience among readers of romance novels, and by 2009, a dozen titles had appeared. Banks emerged as the most successful African American vampire author to date.

Feedback
Flashcards & Bookmarks ?
Please log in or register to use Flashcards and Bookmarks. You can also log in with
Flashcards ?
My bookmarks ?
+ Add current page to bookmarks
Mentioned in ?
References in periodicals archive ?
While traditional Dracula movies portray the king of vampires as an Eastern European count, African American vampires have been at the center of films such as Blacula, Vampire in Brooklyn and the Blade series.
Meanwhile, back at the crypt: new black vampire and horror tales are so sexy