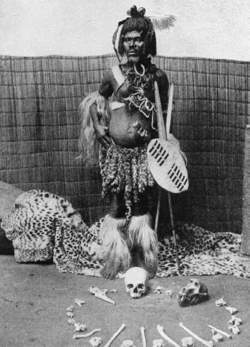 Africa is the second largest continent in the world, yet it has a population of only 400 million—just two-thirds that of Europe. Despite that, Africa has more than 1,000 ethnic groups and 6,000 different tribes, each with its own lifestyle, language, religion, and social customs. The continent is rich in folklore, pagan religion, and magic. Despite 500 years of being disrupted by colonization, exploitation, slavery, and famine, the people of Africa manage to maintain their connection between life and spirituality.

In many ways, the African peoples are advancing into modern technology, changing their customs, fashions, jobs, and modes of living. Yet a firm belief in the supernatural remains deeply ingrained in many parts of the continent. Although local laws and authorities may strive to stamp out some of the older practices, they live on even in the midst of the largest cities. Many people are caught between their deeply rooted traditions and the influences of modern ideas and technologies. This is seen in many of the larger cities and towns around the world, where Voodoo (a direct descendant of African religious beliefs) is practiced in some form.

Religion is an integral part of family life throughout most of Africa, and there is great religious variety. For example, the religions of the Nuer of the Sudan and the Masai of Tanzania and Kenya center on a deity associated with the sky and with rain. They have no tradition of venerating their ancestors. Yet the Yoruba of Nigeria revere their ancestors, believing them to have attained the status of gods. The Kaka of the Cameroon have a belief in a creator-god and revere the spirits of the dead, each home having a shrine. The Ashanti of Ghana believe in amulets and talismans, not only for personal protection but also for influencing people and the gods. The Zulu are atypical in that they revere a goddess. They associate her with the beauty of the earth and with the rainbow.

The area in which practices are most similar in many ways to those of Wicca is in West Africa, in the Congo. Among this million and a half people, there is a shamanistic priestly tradition very similar to that of European Wicca: priests, known as the Mganga, or Mufumu, who are also the local doctors, lawyers, diviners, exorcists, and leaders.

Virtually all Africans believe in a Supreme Being, but for some this Being is virtually ignored because it is disassociated from the everyday life of humans. Of more concern are the lesser gods and the ancestors, who are accessible for help and advice. Below them come the forces of magic and of medicine.

To the African generally, a Witch is one person, a witch doctor (one who is called upon to find and exorcise a Witch) is another, a magician who uses white or protective magic is a third person, and a magician who uses black or negative magic is a fourth. The African magician is always thought of as being a male. He uses rituals, spells, and material substances, and must acquire his magical powers as well as his equipment from a medicine man. A witch is usually thought of as being a female. She uses no ritual, no spell, and no material substances. Her power is innate. The magician may operate at any hour of the day or night, yet a witch may operate only at night.

White magic, with its healing and protection, is the responsibility of the medicine man and of the witch doctor, who wages war on witches, viewed negatively in African witchcraft. White magic is so called because it is of the light and is done openly. Black magic, on the other hand, is of the darkness and is performed secretly.

Yet the Zande, in the southwest of the Sudan, think of witches as ordinary people. They feel that everyone is born with a substance within their body that has the power to injure others. You would not know that you had the substance unless it became operative, which could happen without being desired. In fact, it is thought that this frequently occurs at night, while the host is sleeping.

African pagans share with Wiccans the belief in a life after death. Yet they believe that no one dies of natural causes. A life ends because it has been "interfered with"—the death has been caused either by humans or by spirits. Therefore, when a person dies he or she does not leave the community but continues to take part in the community life, albeit in spirit form. Such a spirit is neither worshiped nor feared, but consulted for advice. The fear of witches, exercised by so many Africans, comes from a belief that somebody or something must be responsible for apparently inexplicable events. What others may call coincidental, the African calls witchcraft. Why should an accident happen to an apparently good person, who lives his or her life in an exemplary fashion, unless it has been brought about by some evil person or spirit?

A further parallel with the Witches of Europe is that most pagan Africans, not familiar with building from stone, prefer natural shrines and groves for their worship and magical practices. There may or may not be a hut in such a sacred area. However, in Nigeria, the Yoruba temples and shrines are set up almost like military compounds.

Again as with the Wicca, animal life is considered a sacred part of religion. In the north of Africa, in ancient Egypt, many of the deities were associated with specific animals, frequently personified by animals and reptiles. Throughout Africa, the worship of snakes, and especially the python, is common, particularly in tribes in eastern and western Africa. "Python Temples" are plentiful in these areas.

Many African Witches are thought to have familiars—magical servants who perform tasks for them. Witches of the Kuanyama Bantu in southwest Africa use owls and jackals; others use bats and hyenas.

A less pleasant parallel between the Witches of Europe and those of Africa is the belief that their powers may be negated by burning them alive.

In many areas of the world throughout history, iron has been regarded as a magical substance and iron tools as having special, magical qualities. The Ancient Egyptians called iron "metal from the sky." The Aztecs called it "the gift of heaven." G. Storms states: "Iron manifestly takes its power from the fact that the material was better and scarcer than wood or stone for making tools, and secondly from the mysterious way in which it was originally found: in meteoric stones. It needed a specialist and a skilled laborer to obtain the iron from the ore and to harden it. Indeed, we find many peoples regard their blacksmiths as magicians." Africans, in general, certainly regard their blacksmiths as magicians. In many African legends, the blacksmith is the healer. He also instructs people how to use fire and teaches animal husbandry and sexual behavior. The Masai, of Kenya and Tanzania, believe that to walk on the ground surrounding a blacksmith's hut is to risk misfortune, sickness, and death, while the Dogon, in a harsh area of West Africa, place the blacksmith's hut in the very center of the village, in a place of honor.

Feedback
Flashcards & Bookmarks ?
Please log in or register to use Flashcards and Bookmarks. You can also log in with
Flashcards ?
My bookmarks ?
+ Add current page to bookmarks
Mentioned in ?
References in periodicals archive ?
Ties that bind: African witchcraft and contemporary slavery.
Convicted without Evidence: Elderly Women and Witchcraft Accusations in Contemporary Nigeria
We suggest that, in contrast to these approaches, and when seen from a historical and cultural comparative perspective, such dialectics can also be found elsewhere, so that the ethical predicaments of African witchcraft should be considered to be nothing more than a variation of a thoroughly transversal phenomenon.
Introduction: new ethical fields and the implicitness/ explicitness of ethics in Africa
Currently, he is researching African witchcraft accusations and their social impact at the University of Bayreuth in Germany.
Africa's first humanist wedding
African witchcraft is no more a theory of the natural world than the Christian and Islamic dogma of Divine Providence is--what these three belief systems have in common is that they seek to articulate what is beyond empirical knowledge; but all may be pushed to a point where they imply the possibility of miracles (i.e., incidental departures from physical laws).
The problem of witchcraft violence in Africa
The final part deals with ways that Pentecostalism deals with religious diversity, with contributions by editor Veli-Matti Karkkainen on the role of Pentecostal pneumatology, Opoku Onyinah on Pentecostal responses to African witchcraft, Amos Yong on responses to Buddhism, and Tony Richie on a Pentecostal theology of religions.
The Spirit in the World: Emerging Pentecostal Theologies in Global Contexts
Both European and African witchcraft traditions reference the riding of poles (545), and Tituba's mentioning the involvement of outsiders might relate, according to Breslaw, to the "Guianese concept of the malevolent persona who inhabits a different village from its victim" ("Tituba's Confession" 546).
Historical Fiction and Maryse Conde's I, Tituba, Black Witch of Salem
Comaroff, (eds) Modernity and its Malcontents: Ritual and Power in Postcolonial Africa (Chicago: University of Chicago Press, 1993); Misty Bastian, "'Bloodhounds Who Have No Friends': Witchcraft and Locality in the Nigerian Popular Press," in Modernity and its Malcontents; Peter Geschiere, The Modernity of Witchcraft: Politics and the Occult in Postcolonial Africa (Charlottesville: University Press of Virginia, 1997); Adam Ashforth, Madumo: A Man Bewitched (Chicago: University of Chicago Press, 2000); Elias Kifon Bongmba, African Witchcraft and Otherness: A Philosophical and Theological Critique of Intersubjective Relations (Albany, NY: State University of New York Press, 2001).
Prospects and pitfalls of a global history approach to the early-modern European witch hunt
He had been poisoned by a toxic calabar bean used in West African witchcraft rituals.
CARER ABUSED CHILD IN VOODOO RITUAL; EXCLUSIVE STUDY SHOWS WITCHCRAFT TORTURE IS RISIN
Hence, "witchdemonology" is used in this paper to describe the beliefs and practices of "deliverance ministry" in Africa, which this thesis assumes is a synthesis of the practices and beliefs of African witchcraft and Western Christian concepts of demonology and exorcism.
Contemporary "witchdemonology" in Africa
A BOY whose torso was found in the River Thames had been poisoned by a toxic calabar bean used in West African witchcraft rituals, police said yesterday.
TORSO BOY POISONED BY A BEAN
Bongmba, Elias Kifon (2001) African Witchcraft and Otherness: A Philosophical and Theological Critique of Intersubjective Relations.
Discourses of demonization in Africa and beyond
Geschiere also argues, in less convincing but nevertheless provocative fashion, that African witchcraft discourse has analogies in the personalized interpretations of political events in European and North American society.
The Modernity of Witchcraft: Politics and the Occult in Postcolonial Africa