[′af·tər‚bər·nər]
(aerospace engineering)
A device for augmenting the thrust of a jet engine by burning additional fuel in the uncombined oxygen in the gases from the turbine.
McGraw-Hill Dictionary of Scientific & Technical Terms, 6E, Copyright © 2003 by The McGraw-Hill Companies, Inc.
The following article is from The Great Soviet Encyclopedia (1979). It might be outdated or ideologically biased.

a secondary combustion chamber in certain turbojet engines that is used to augment the engine thrust for a short time (see). An engine equipped with an afterburner is called an afterburning engine.

An afterburner is situated between the turbine and the jet nozzle of a turbojet engine or a dual-cycle engine. The gas that leaves the turbine still contains much oxygen; in a turbojet engine, this gas alone enters the diffuser of the afterburner. In a dual-cycle engine, a mixture of the gas that leaves the turbine and air from a bypass duct enters the diffuser. The speed of the gas flow is reduced in the diffuser, and fuel—usually aviation kerosene—is then injected into the flow. When the fuel is burned in the afterburner, the temperature rises and the exhaust jet velocity increases. 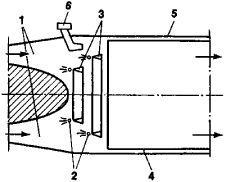 Flameholders are used so that the combustion process occurs over the shortest possible distance. A liner is employed to shield the walls of the afterburner. The afterburner is started by a flame from a precombustion chamber (see Figure 1).

Afterburners may also be used to boost the power of free-piston engines.

A PCI Express (PCIe) accelerator card for the latest Mac Pro (2019). Afterburner decodes videos that use the ProRes and ProRes RAW codecs, such as QuickTime Player and Final Cut Pro. See PCI Express and Mac Pro.
Copyright © 1981-2019 by The Computer Language Company Inc. All Rights reserved. THIS DEFINITION IS FOR PERSONAL USE ONLY. All other reproduction is strictly prohibited without permission from the publisher.