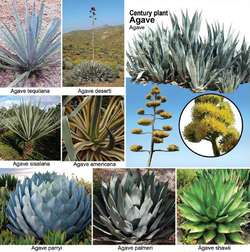 A desert emergency food used for production of sugar and syrup. Common landscaping ornamental plant, looks like Aloe, but thicker leaves, (not related to aloe) sometimes more bluish or grey-green, or whitish sharp spikes. When it flowers, a thick vertical stem shoots out of the middle straight up, (sometimes to 40ft!) (12m) with clusters of tubular yellow-green flowers which are edible. They take a long time until they flower, sometimes years. These center stalks are edible when young. Leave a hole where the stalk used to be and it will fill with sap, “agave syrup”, a sweetener. The “heart” is edible- the clump between leaves and root. Leaves can be eaten but aren’t that great NOTE: juice is caustic and can cause skin rash and burn eyes. Best to cook or roast the leaves, then eat, spitting out the fiber. Juice can be boiled to make soap that lathers. Sap is antiseptic, used for diarrhea, dysentery, constipation, diuretic. Root can be boiled and eaten but handle carefully when raw- quite caustic. Roots used to treat syphilis. Unlike other plants, agaves are better the older they get. Seeds, roots, heart can be ground into flour. Water in which agave leaf fiber has been soaked for a day can be used as a scalp disinfectant and tonic for people losing hair. Steroid drug precursors are obtained from the leaves. Edible ones- americana, atrovirens, cantala, chrysantha, complicata, crassipina, deserti, palmeri, paryi, salmiana, scabra, shawii, sisalana, tequilana, utahensis. Non edible- A. lechuguilla.
Edible Plant Guide © 2012 Markus Rothkranz
The following article is from The Great Soviet Encyclopedia (1979). It might be outdated or ideologically biased.

any plant of the genus Agave, native to tropical America, with tall flower stalks rising from a massive, often armed, rosette of thick fleshy leaves: family Agavaceae. Some species are the source of fibres such as sisal or of alcoholic beverages such as pulque and tequila
Collins Discovery Encyclopedia, 1st edition © HarperCollins Publishers 2005

Feedback
Flashcards & Bookmarks ?
Please log in or register to use Flashcards and Bookmarks. You can also log in with
Flashcards ?
My bookmarks ?
+ Add current page to bookmarks
Mentioned in ?
References in periodicals archive ?
Calavera Tequila cooks its agaves in an old-fashioned mamposteo oven, says Aldo Garcia, master distiller at Destiladora de Agave Azul.
CRUSHING ON CRAFT TEQUILA: Some producers are reviving traditional, artisanal methods to get to the heart of this agave spirit
It's made with Volcan Blanco Tequila, Del Maguey Vida Mezcal, jalapeno-infused Chartreuse and agave syrup ($14).
Adventurous SPIRIT: THE TEQUILA CATEGORY CONTINUES TO GROW AND EXPAND AS BARTENDERS REACH FOR MORE CHOICES AMONG THE AGAVE FAMILY
It is made by fermenting the sap of the agave plant, which has been badly affected by the ongoing soil erosion.
In Mexico, ecotourism helps traditional agriculture survive
acupunctatus frequently are found in the basal leaf or inside the "pina", in high infestations this weevil can be found also in the agave heart and in the "quiote".
SINERGISTAS VEGETALES PARA LA CAPTURA DEL ADULTO DE SCYPHOPHORUS ACUPUNCTATUS GYLLENHAL, EN TRAMPAS CON FEROMONA, EN AGAVE ANGUSTIFOLIA HAW., EN MORELOS, MEXICO
This farm had 60 ha sown with 2-yr-old blue agave at the time of the experiments.
Amount and bagging of the bait food affect the captures of Scyphophorus acupunctatus (Coleoptera: Curculionidae) by pheromone-baited traps
Gentry, Agaves of Continental North America, University Of Arizona Press, Tucson, AZ, USA, 1982.
Transcriptome Comparison Reveals Distinct Selection Patterns in Domesticated and Wild Agave Species, the Important CAM Plants
'Today's tequila consumer is more aware of premium variants and 100% agave offerings than compared to previous years.
Tequila at the border
Row upon row of blue agaves stretched in all directions, each plant's needle-tipped leaves rising head high.
Heart of Agave: how a renegade optometrist is defying Big Ag and saving Mexican farms--with the finest tequila you'll ever taste
Desert agave take decades to establish and a rosette must be >1,000 g in dry weight before flowering can occur (Tissue and Nobel, 1990).
Use of agave by desert bighorn sheep