a reaction engine in which fuel combustion is sustained by atmospheric oxygen. It is used to propel aircraft (airplanes, helicopters, and missiles). In the air-breathing jet engine, the thrust results from the expulsion of the working gases from the exhaust nozzle. To expel the gases from the nozzle at high velocity, the air entering the combustion chamber of the engine is compressed. Depending on the means by which the air is compressed, air-breathing jet engines are divided into turbojets, pulse-jets, and ramjets.

Turbojet engines have a compressor driven by a gas turbine; this makes it possible, independent of the speed of flight, to create the air compression that ensures high exhaust gas velocities and high thrust. Turbojet engines are widely used in airplanes, helicopters, and unmanned winged missiles. They can also be installed in boats, racing cars, air cushion vehicles, and so on.

Pulse-jet engines have an intake diffusor (to compress air under the influence of the kinetic energy of the intake flow) that is separated from the combustion chamber by inlet valves, and a long, cylindrical exhaust nozzle. Fuel and air are admitted into the chamber at intervals. Combustion of the mixture causes an increase in pressure in the chamber, since the inlet valves close automatically, and the gas column in the long nozzle has inertia. The pressurized gas flows out of the nozzle at high speed, thereby creating the thrust. Toward the end of the exhaust process, the pressure in the combustion chamber falls below that of the ambient atmosphere, the valves open automatically, and fresh air is admitted and fuel is injected into the chamber; the operating cycle is repeated. Pulse-jet engines can produce thrust at rest and at low flying speeds. When the valves are closed, the air resistance of pulse-jet engines is higher than that of other types of air-breathing jet engines, and their thrust is lower; they are used only for aircraft flying at subsonic speeds.

In ramjet engines, air is compressed in the intake diffusor by the kinetic energy of the intake flow. Their operation is continuous; therefore, they have no takeoff thrust. At flying speeds below half the speed of sound (below 500 km/hr) the increase in air pressure in the diffusor is insignificant and the thrust is small. Because of this, the ramjet engine is not used for flight at speeds corresponding to M < 0.5 (where M is the Mach number); at M = 3 (a flying speed of approximately 3,000 km/hr), the pressure in the combustion chamber becomes about 25 times greater. Ramjets can run on both chemical (kerosene, gasoline, and so on) and atomic fuel. When ramjets are installed in aircraft with a variable flying speed—for example, in interceptor-fighters—the dimensions and shape of the intake must be variable in order to make the best possible use of the ram effect of the incoming airflow. The shape and dimensions of the exhaust nozzle must also be variable. Ramjet interceptor-fighters are powered on takeoff by liquid- or solid-fuel rocket motors, and the ramjet begins to function only when the airplane reaches a speed at which the air pressure in the diffusor is sufficiently high. The main advantages of the ramjet engines are the ability to operate at far greater speeds and altitudes than turbojets, greater economy than liquid-fuel rocket motors (since the ramjet engine uses atmospheric oxygen, whereas in the liquid-fuel rocket motor, oxygen is carried with the engine as one of the components of the fuel), the absence of moving parts, and the simplicity of its design. The main disadvantages of the ramjet are the absence of static (takeoff) thrust, necessitating an assisted takeoff; and poor economy at low flying speeds. Ramjets are most efficient for flight at high supersonic speeds. A ramjet engine with supersonic combustion of the fuel (in a combustion chamber) is called a hypersonic ramjet. It is best used in aircraft flying at speeds of M = 5-6. The operating limits of the various types of engines are shown in Figure 1. 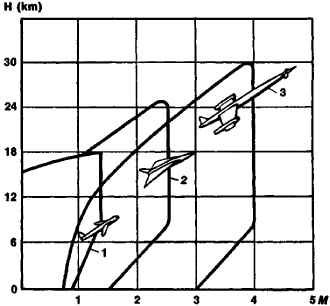