(in Russian, letatel’nyi apparat), vehicles used for controlled flight within the atmosphere of a planet or in outer space. The flight of such vehicles is motion over the solid or liquid surface of a planet or in interplanetary space. Aircraft are used to transport passengers or freight, for agricultural and construction work, for scientific research, and for military purposes. A distinction is made between atmospheric aircraft and spacecraft. Atmospheric aircraft, in turn, are divided into heavier-than-air and lighter-than-air craft.

Forces acting on aircraft and spacecraft Aircraft and spacecraft are acted upon by the gravity of planets and other celestial bodies and, in the case of flight in the atmosphere, by atmospheric drag. The effect of these forces is overcome by the forces of lift and thrust. Lift and thrust are also used to control the flight of an aircraft (to change the speed and direction of flight or to change the attitude of the vehicle). Figure 1. Diagram of the aerostatic principle for the production of lift by a dirigible: (p) air pressure, (ρ) air density, (g) gravitational acceleration, (h) height of the aerostat. The arrows indicate the pressure distribution on the surface of the aircraft, which is surrounded by air.

The principles of aerostatics, aerodynamics, and gas dynamics are used in producing lift. Aerostatic lift develops because of a difference in density between the atmosphere and the gas filling the envelope of an aircraft (see Figure 1); it acts on the outer surface of the aircraft and is directed vertically upward. Aerodynamic force also acts on the outer surface of aircraft; it develops because of a pressure differential occurring on the aircraft surface as a result of nonsymmetrical flow of the air around the aircraft (see Figure 2). The component of the aerodynamic force that is perpendicular to the direction of flight is the lift, and the component that is parallel to the flight velocity and directed backward is the aerodynamic resistance (drag). The lift-to-drag ratio is called the aerodynamic efficiency. If principles of gas dynamics are used, lift is developed because of the pressure of a gas acting on the inner surface of a reaction engine (see Figure 3). 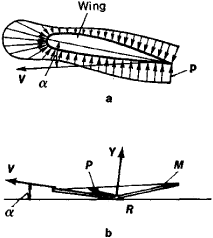 Figure 2. Diagram of the aerodynamic principle for production of lift by the wing of a subsonic airplane (a) and by the main rotor of a helicopter (b): (p) air pressure, (α) angle of attack of the wing, (V) flight velocity, (Y) lift, (P) thrust, (M) main rotor, (R) plane of rotation of the main rotor. The arrows indicate the pressure distribution on the surface of the wing.

Figure 3. Diagram of the gas-dynamics principle for production of lift in a VTOL aircraft: (1) compressor, (2) nozzles for atomization of fuel, (3) combustion chamber, (4) gas turbine, (5) gas-dynamic control surfaces, which deflect the stream of gases and consequently change the direction of the thrust developed by the engine

The flight of an aircraft usually consists of three basic stages: the takeoff (takeoff run and climb), flight (flight with a more or less constant velocity), and landing (braking, descent to touchdown, and landing run). Some of the stages of flight may be lacking, or they may assume a specific form. During takeoff the thrust for the takeoff run is usually provided by an engine mounted in the aircraft. Takeoff may also be achieved by external auxiliary equipment, such as a catapult. During the second stage, in stable, straight-line flight, the resultant of all forces acting on the aircraft is equal to zero. During the third stage of flight, the velocity is reduced gradually to some small value necessary for a safe landing. A force that is almost equal to the pull of gravity and a force that provides braking in a horizontal direction are necessary to achieve a safe landing.

Lighter-than-air craft (aerostats, dirigibles, and so on). The lift of lighter-than-air craft is aerostatic in nature. An aerostat develops only lift; its horizontal displacement is caused by wind. In an aerostat, control of the flight is limited to changing the altitude by changing the mass or volume of the aerostat. A dirigible is equipped with propellers, which are turned by the engines, producing thrust. In addition to the means of control used in an aerostat, a dirigible also uses aerodynamic control members.

Heavier-than-air craft (airplanes, gliders, helicopters, rotary-wing aircraft, and so on). The lift of heavier-than-air craft is predominantly aerodynamic. In some cases the principles of gas dynamics are also used. The most common type of heavier-than-air craft is the airplane. Its lift is provided mainly by the wing. A much smaller fraction of the lift is provided by the fuselage and empennage. Designs are now under consideration for aircraft flying at hypersonic speeds, for which most of the lift is supplied by the body of the aircraft. The thurst of an airplane is developed by piston, gas-turbine, or air-breathing engines. Rocket motors are rarely used in airplanes (usually only as boosters). In future hypersonic airplanes the use of rocket motors as the main means for producing thrust appears possible. Aerodynamic members (elevators, rudders, ailerons, and so on), as well as adjustment of thrust, are used to control the flight of airplanes.

The lift of a wing varies approximately as the square of the flight speed. At low speeds the lift of the wings is insufficient to achieve lift-off from the earth’s surface. For each airplane there exists a minimum velocity at which the lift of the wings equals the weight of the airplane. Therefore, a takeoff run is necessary to achieve the minimum velocity. Likewise, a landing run is necessary to reduce the speed to zero. These requirements necessitate the construction of runways at airports. A reduction in the minimum speed and a corresponding reduction in the length of takeoff and landing runs can be achieved by increasing the lift of the wings through high-lift devices or boundary-layer blowing or by passing the propeller airstream over the wing.

Lift may be created even for a motionless aircraft. For this purpose the wings must move with respect to the body of the aircraft. Designs exist for aircraft with flapping or oscillating wings (ornithopters). A type of aircraft in widespread use is the helicopter, whose main rotor may be considered as a system of wings rotating in a near-horizontal plane. The angle between the plane of rotation of the rotor and the direction of flight provides both lift and thrust. In a rotary-wing aircraft the lift is provided simultaneously by the main rotor and the wing, and thrust is supplied by the thrust and main rotors. The propellers of some airplanes can vary their plane of rotation from vertical to horizontal. Such airplanes are capable of vertical takeoff and landing. The use of principles of gas dynamics in providing lift enables an airplane with a reaction engine to fly at low speeds and even to hover, as well as to take off and land vertically or with a shortened run. Such results are achieved by deflecting the reaction jet downward by means of swiveling nozzles or by using special vertically mounted engines.

Spacecraft (unmanned interplanetary probes, artificial earth satellites, manned spacecraft, and so on). Because of the great differences among the various stages of space flight, and also to reduce mass, spacecraft have a sectional structure. A spacecraft usually consists of a launch rocket, the orbital or interplanetary module, and a vehicle that can descend to the surface of a planet; all the sections are separate. The launch rocket accelerates the spacecraft to a speed equal to or exceeding orbital velocity. The rocket is controlled by changing the magnitude and direction of the thrust produced by the rocket motors; in the case of a planet with an atmosphere, aerodynamic control surfaces are also used. Orbital and interplanetary spacecraft are guided by means of rocket motors, which may also be used for additional acceleration on a long interplanetary journey to shorten the flight. The efficiency of use of the working medium in the motor increases with increasing velocity of the exhaust gas streaming from it. In rocket motors the flow of gas can be accelerated by heating it through combustion of chemical fuels and subsequent expansion of the gas within the nozzle. Work is now under way to develop spacecraft motors with gas flow speeds higher than can be achieved in a rocket motor (for example, plasma and electrostatic jet engines).

During the final stage of the flight, the spacecraft is braked by a rocket motor. If the planet has no atmosphere, the rocket motor is used until touchdown; if the planet has an atmosphere, aerodynamic forces are also used. The use of lift makes possible a reduction in g-loads, which can be harmful to humans. Accuracy of landing can be increased by controlling the spacecraft using lift. Designs of spacecraft that are able to take off from and land on the earth’s surface like an airplane are now under consideration.