The process of designing an aircraft, generally divided into three distinct phases: conceptual design, preliminary design, and detail design. Each phase has its own unique characteristics and influence on the final product. These phases all involve aerodynamic, propulsion, and structural design, and the design of aircraft systems.

During detail design the selected aircraft design is translated into the detailed engineering data required to support tooling and manufacturing activities.

The requirements used to guide the design of a new aircraft are established either by an emerging need or by the possibilities offered by some new technical concept or invention. Requirements can be divided into two general classes: technical requirements (speed, range, payload, and so forth) and economic requirements (costs, maintenance characteristics, and so forth).

The aerodynamic forces that determine aircraft performance capabilities are drag and lift. The basic, low-speed drag level of the aircraft is conventionally expressed as a term at zero lift composed of friction and pressure drag forces plus a term associated with the generation of lift, the drag due to lift or the induced drag. Since wings generally operate at a positive angle to the relative wind (angle of attack) in order to generate the necessary life forces, the wing lift vector is tilted aft, resulting in a component of the lift vector in the drag direction (see illustration). See Aerodynamic force, Wing 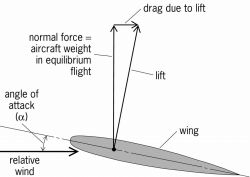 Wing lift and drag due to lift

Aircraft that fly near or above the speed of sound must be designed to minimize aerodynamic compressibility effects, evidenced by the formation of shock waves and significant changes in all aerodynamic forces and moments. Compressibility effects are mediated by the use of thin airfoils, wing and tail surface sweepback angles, and detailed attention to the lengthwise variation of the cross-sectional area of the configuration.

The size and location of vertical and horizontal tail surfaces are the primary parameters that determine aircraft stability and control characteristics. Developments in digital computing and flight-control technologies have made the concept of artificial stability practical. See Stability augmentation

Propulsion design comprises the selection of an engine from among the available models and the design of the engine's installation on or in the aircraft.

Selection of the best propulsion concept involves choosing from among a wide variety of types ranging from reciprocating engine-propeller power plants through turboprops, turbojets, turbofans, and ducted and unducted fan engine developments. The selection process involves aircraft performance analyses comparing flight performance with the various candidate engines installed. In the cases where the new aircraft design is being based on a propulsion system which is still in development, the selection process is more complicated. See Aircraft engine, Turbofan, Turboprop

Once an engine has been selected, the propulsion engineering tasks are to design the air inlet for the engine, and to assure the satisfactory physical and aerodynamic integration of the inlet, engine, and exhaust nozzle or the engine nacelles with the rest of the airframe. The major parameters to be chosen include the throat area, the diffuser length and shape, and the relative bluntness of the inlet lips.

Structural design begins when the first complete, integrated aerodynamic and propulsion concept is formulated. The process starts with preliminary estimates of design airloads and inertial loads (loads due to the mass of the aircraft being accelerated during maneuvers).

During conceptual design, the structural design effort centers on a first-order structural arrangement which defines major structural components and establishes the most direct load paths through the structure that are possible within the constraints of the aerodynamic configuration. An initial determination of structural and material concepts to be used is made at this time, for example, deciding whether the wing should be constructed from built-up sheet metal details, or by using machined skins with integral stiffeners, or from fiber-reinforced composite materials.

During preliminary design, the structural design effort expands into consideration of dynamic loads, airframe life, and structural integrity. Dynamic loading conditions arise from many sources: landing impact, flight through turbulence, taxiing over rough runways, and so forth.

Airframe life requirements are usually stated in terms of desired total flight hours or total flight cycles. To the structural designer this translates into requirements for airframe fatigue life. Fatigue life measures the ability of a structure to withstand repeated loadings without failure. Design for high fatigue life involves selection of materials and the design of structural components that minimize concentrated stresses.

Design of these major subsystems must begin relatively early in the conceptual design phase, because they represent large dimensional and volume requirements which can influence overall aircraft size and shape or because they interact directly with the aerodynamic concept (as in the case of flight-control systems) or propulsion selection (as in the case of power systems).

Feedback
Flashcards & Bookmarks ?
Please log in or register to use Flashcards and Bookmarks. You can also log in with
Flashcards ?
My bookmarks ?
+ Add current page to bookmarks
Mentioned in ?
References in periodicals archive ?
In this aircraft design problem, constraints were imposed on takeoff distance, rate of climb, landing distance, cruise speed, payload, and ceiling.
Transport aircraft conceptual design optimization using real coded genetic algorithm
The initiative aims to accelerate technological advancements in aircraft design and green aviation technology.
High hopes for graphene research
The Clean Sky initiative aims to accelerate technological advancements in aircraft design and green aviation technology.
Research points to greener flying
EasyJet reveals eco-friendly aircraft concept UK budget carrier EasyJet has revealed an aircraft design concept, which it claims could cut CO2 output by 50% and emitting less noise.
Company Watch - EasyJet
Finally, we're the leader in composite fabrication systems, giving us insight into the material revolution in aircraft design and allowing us to offer single-source convenience on both composite and machining systems."
Ground support
Upon aircraft design, two companies were commissioned to construct the engines: Rolls Royce, Derby, England, which produced previous Airbus engines; and the Engine Alliance, East Hartford, Conn., a joint venture between General Electric (GE) and Pratt & Whitney, with assistance from MTU Friedrichshafen GmbH, Friedrichshafen, Germany.
Airbus' casting commotion: as the largest commercial airplane ever built, the Airbus A380 is expected to take passengers longer distances with better fuel economies. Key ingredients in this aircraft's success are engineered cast components
BUSINESS is booming for a Deeside-based business launched by a former aircraft design engineer.
Former aircraft engineer goes in for a new brand of design
The aircraft design, power, and stability were all factors in solving that problem.
How compensation in test and evaluation affects aircraft acquisition
In 1907 Bleriot introduced a design that, though not initially successful, incorporated innovations that pointed to the future of aircraft design. This plane, the Bleriot VII, was monoplane in configuration, carried a front-mounted engine, a rudder and tailplane to the rear, an enclosed fuselage, and a landing gear assembly featuring two main wheels and a tail wheel.
The free market takes flight
SOFTWARE AS PROTOTYPES Back about 40 years ago, according to Richard Smith, director of CAD/CAM products and services for The Boeing Commercial Airplanes, whatever software Boeing had for aircraft design and simulation was all internally developed.
What auto can learn from aero: simulating without prototypes
Deep Server allows for seamless creation of an integrated pipeline from aircraft design and manufacturing all of the way to training, courseware and supportability software applications.
State of the art Comanche helo needs training infrastructure
"Aircraft design has not changed over the last 40 or 50 years," said Adam, a private pilot who works at a desk on the hangar floor.
Air apparent: Two aviation manufacturers take off at Centennial