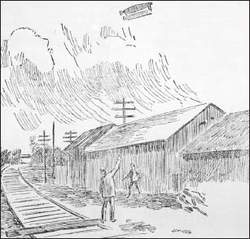 A newspaper artist’s rendition of Walter McCann taking a photo of an airship over Rogers Park near Chicago in 1897.

In 1897, years before any known terrestrial agency had accomplished heavier-than-air flight, members of a secret society in contact with extraterrestrials piloted a large airship, often described as resembling a cone-shaped steamboat, across the United States and later throughout the world.

In 1897 the world was poised confidently on the brink of the twentieth century. In 1893 Karl Benz and Henry Ford had built their first four-wheeled automobiles. In 1895 Auguste and Louis Lumière had invented the cinematograph, Guglielmo Marconi had invented radio telegraphy, and Konstantin Tsiolkovsky had formulated the principle of rocket reaction propulsion.

The Royal Automobile Club was founded in London in 1897, and cars on the ground were going faster every year. But there were no heavier-than-air vehicles racing across the skies—and a good number of brilliant scientists declared that it was aerodynamically impossible to build such flying machines.

And yet, on April 7, 1897, citizens of Wesley, Iowa, sighted a cone-shaped airship with brightly illuminated windows in its side. The witnesses were unable to determine how it was propelled or what sustained it in the air.

On April 15 the airship landed two miles north of Springfield, Illinois. The craft’s occupants explained that they had landed to repair their electrical apparatus and searchlight equipment.

On April 17 the airship returned to Iowa and set down outside of Waterloo. One of the occupants brandished a rifle to keep the curious several hundred yards from the machine. Journalists described the airship as being about forty feet long and constructed like a giant cigar, with winglike attachments on the sides and a steering apparatus in the rear. The machine was surmounted by a cupola on its roof.

During April 21 and 22 the airship barnstormed Arkansas and Texas. In Harrisburg, Arkansas, it awakened a former senator after midnight. Members of the flight crew informed him that the builder of the craft was a brilliant inventor from St. Louis who had discovered the secret of suspending the laws of gravity. Nineteen years had been invested in building the airship, but because it was not quite perfected, the crew preferred to travel at night. Once they had accomplished a successful voyage to the planet Mars, they would put the airship on public exhibition.

On April 24 a prominent Texas farmer was awakened at midnight by a strange whirring sound and the brilliant lights of what he assumed were angels in a celestial vehicle. The visitors informed him that they came not from heaven, but from a small town in Iowa, where five such airships had been constructed. The craft were built of a newly discovered material that had the property of self-sustenance in the air. The motive power was a highly condensed electricity.

Throughout the following weeks, landing and contact reports came from areas all across the United States. During the summer months of 1897, sightings were reported from other parts of the world as well. In July and August mysterious aerial objects were seen over Sweden and Norway. On August 13 what appeared to be the same aerial craft was sighted off the coast of Norway and over Vancouver, British Columbia, on the same day.

In 1898 Count von Zeppelin announced his achievement of a dirigible, but the early models had such a restricted flying range that great difficulties were encountered in making successful flights from Germany to England. In 1903 Orville and Wilbur Wright accomplished the first flight with a heavier-than-air vehicle with a craft that managed to stay aloft for twelve seconds and travel 120 feet. But in 1897 no terrestrial agency had constructed an aerial vehicle that could traverse the globe with the speed and ease of the airship piloted by the mysterious inventors from Iowa or St. Louis. Because of this fact, many researchers believe that the builders of the 1897 airship belonged to a secret society, perhaps one that had been in touch with extraterrestrial intelligences—or their records and artifacts—for thousands of years.

Numerous European occult groups have been molded around the belief that a secret society centuries ago achieved a high level of scientific knowledge and has carefully guarded this dangerous learning from the rest of humanity ever since. A common theme is that certain men of genius in ancient Egypt and Persia were given access to the records of the advanced technologies of the antediluvian world. Many hundreds of years ago, these ancient masters learned to duplicate many of the feats of the Titans of Atlantis—and attracted the attention of extraterrestrials who had been monitoring Earth for signs of advanced intelligence.

The decision to form a society within a society may have reflected the members’ highly developed moral sense and their recognition of the awesome responsibility that possessing this ancient knowledge placed upon them. They may have decided to keep their own counsel until the rest of the world became enlightened enough to deal wisely with such a high degree of technical accomplishment. Yet now and then the secret society may conclude that the time is propitious to make one of its discoveries known to the outside world. Such intervention in the affairs of the great mass of humanity is usually accomplished by carefully feeding certain fragments of research to “outside” scientists whose work and attitude have been adjudged particularly deserving.

On the other hand, the secret society’s members may feel little or no responsibility of any kind to those outside the group. They may be merely biding their time until they turn most of humanity into their slaves. For hundreds of years, certain scholars have worried about global conspiracies being conducted by secret societies waiting until the right moment to achieve complete world domination.

The mysterious airship disappeared from the skies for twelve years. On March 24, 1909, a police constable in Peterborough, England, reported having heard a sound similar to a motorcar overhead. Looking up, he spotted an airship shining a powerful light and traveling as fast as an express train. By July the strange aerial machine was sighted in the skies over New Zealand, and it remained there for six weeks before it returned to the United States. There was one reported overflight in the New England area in August, then the airship disappeared until the night of December 12, when residents of Long Island heard a buzzing sound, resembling the rattle and hum of a high-speed motor, coming from the starlit skies above them.

The last reported airship sighting came from Memphis, Tennessee, on January 20, 1910. A number of witnesses saw a craft flying very high in the air and at a high rate of speed. It crossed the Mississippi River into Arkansas, veered slightly to the south, and disappeared.

Perhaps the secret society no longer felt that it was necessary to inspire the “outsiders” to pursue the science of aeronautics, for by 1910 there had already been an international aviation competition held in Rheims, France; a flight from the deck of a seagoing cruiser; a takeoff from water by a floatplane; and the first woman pilot had obtained her license.