pyroxene (pīˈrŏksēn), name given to members of a group of widely distributed rock minerals called metasilicates in which magnesium, iron, and calcium, often with aluminum, sodium, lithium, manganese, or zinc occur as X in the chemical formula XSiO3. The pyroxene minerals crystallize in three different systems—orthorhombic, monoclinic, and triclinic—but all have a fundamental prism with angles of 87° to 93° and cleavages parallel to the prism angles. They are commonly white, grayish white, greenish white, greenish black, black, or brown, but other varieties occur. Pyroxene minerals are found chiefly in igneous and metamorphic rocks and in lunar rocks. Varieties include enstatite, bronzite, hypersthene, diopside, wollastonite, augite, pectolite, spodumene, and rhodonite.
The Columbia Electronic Encyclopedia™ Copyright © 2022, Columbia University Press. Licensed from Columbia University Press. All rights reserved.
The following article is from The Great Soviet Encyclopedia (1979). It might be outdated or ideologically biased.

(from the Greek pyr, “fire,” and xenos, “foreign”; named in 1796 by the French scientist R. J. Haüy, who believed that the origin of pyroxenes was unlike, or “foreign to,” that of volcanic lava), a group of very important magnesium- and iron-rich rock-forming minerals of the inosilicate class.

The general structural formula is R22+ [Si2O6], where R = Ca2+, Mg2+, Fe2+, Na+, and Li+, usually paired with Al3+ or Fe3+; there are also admixtures of Mn4+, Cr3+, Ti4+, and V4+. The crystal structure consists of infinite chains of silicon-oxygen tetrahedrons (SiO4)4-, connected across two common oxygen atoms aligned along the C-axis of the crystals. The repeating unit of the chain is the anion group [Si2O6]4–. The chains are connected into a continuous three-dimensional structure by pairs of R2+ ions (for example, Mg—Mg, Mg—Ca) situated in a zigzag manner at different levels or by R+—R3+(Na+—Fe3+, Li+—Al3+) surrounded by six oxygen atoms. The distribution of cations in these two octahedral positions is determined by means of Mössbauer, optical, and infrared spectra. The structural motif determines the prismatic, acicular habit of pyroxene crystals and the well-developed prismatic cleavage that makes angles of 87°–90°. Pyroxenes are subdivided into orthopyroxenes and clinopyroxenes; the former crystallize in the orthorhombic system, and the latter in the monoclinic system. The structures of orthopyroxenes may be considered roughly as monoclinic structures twinned on the scale of the unit cell. In the orthopyroxenes, cations of Mg2+ and Fe2+, which substitute for one another, predominate (the series enstatite-hypersthene-ferrosilite). The series of clinopyroxenes is further subdivided into two groups according to the dominant cation: the alkaline-earth pyroxenes, with Ca2+, Mg2+, and Fe2+ (diopside-hedenbergite), and the alkaline pyroxenes, with Na+—Fe, Na+—Al3+, or Li+—Al3+ [aegirine], jadeite, and spodumene). It is possible for Al3+ to substitute for Si4+ in the silicon-oxygen tetrahedrons, forming an anion link of the chains of the type [AlO4]5–. In such cases, two- and three-valent cations, for example, Al3+ and Fe3+, may be included in the R+ group, forming augite, in which particles of alkaline pyroxenes, for example, aegirine-augite, are included in the form of a solid solution. (See Figure 1 for pyroxene nomenclature.) 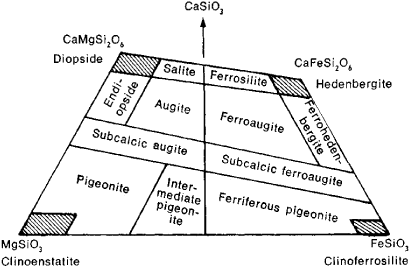 Figure 1. Pyroxene nomenclature in the systems clinoenstatite-diopside-hedenbergite-clinoferrosilite (after A. Poldervaart)

Pyroxenes have a hardness on Mohs’ scale of 5–6.5. Their density ranges from 3,100 to 3,600 kg/m3. Other physical properties, such as color and diaphaneity, also vary with each pyroxene species and variety.

The orthopyroxenes and clinopyroxenes make up monomineralic ultrabasic rock—pyroxenites—and are included in the composition of other ultrabasic rocks, such as peridotites and harzburgites. Clinopyroxenes are more common than orthopyroxenes. The diopside-hedenbergite series is the usual constituent of contact-metasomatic skarns. Augite is found in many types of magmatic rocks, including basalts, andesites, gabbros, and diorites. Aegirine (also called aegirite or acmite) is a common mineral in alkaline syenites, jadeite is typical of certain metamorphic rocks, and spodumene is found only in lithium pegmatites. Clinopyroxenes, namely, augites, are the chief minerals of lunar basalts.

Under the influence of hydrothermal solutions, pyroxenes alter to serpentine, hornblende (uralite), chlorites, epidote, and other minerals. Surface weathering alters pyroxenes to montmorillonite.

Spodumene is a valuable source of lithium, and its transparent varieties are used as gems. Jadeite is an industrial stone.

[pə′räk‚sēn]
(mineralogy)
A family of diverse and important rock-forming minerals having infinite (Si2O6) single inosilicate chains as their principal motif; colors range from white through yellow and green to brown and greenish black; hardness is 5.5-6 on Mohs scale, and specific gravity is 3.2-4.0.
McGraw-Hill Dictionary of Scientific & Technical Terms, 6E, Copyright © 2003 by The McGraw-Hill Companies, Inc.