(redirected from Alexander Stepanovich Popov)
Also found in: Wikipedia.
The following article is from The Great Soviet Encyclopedia (1979). It might be outdated or ideologically biased.

After graduating from the faculty of physics and mathematics of the University of St. Petersburg in 1882, Popov remained at the university to prepare for scientific work. He taught physics and electrical engineering at the Mine Officers’ School from 1883 to 1901 and at the Technical School of the Naval Administration in Kronstadt from 1890 to 1900. He became a professor of physics in 1901 at the St. Petersburg Electrotechnical Institute, of which he became director in 1905. Popov was awarded the title of an Honorary Electrical Engineer in 1900 and in 1901 became an honorary member of the Russian Technical Society.

Popov’s earliest research was devoted to an analysis of the most efficient performance of dynamoelectric machines (1883) and to the Hughes induction balance (1884). After the publication of H. Hertz’ work on electrodynamics in 1888, he began a study of electromagnetic phenomena and gave a series of public lectures, “Recent Investigations of the Relationship between Light and Electric Phenomena.” In an attempt to find a way of effectively demonstrating Hertz’ experiments before a large audience, he undertook the construction of a suitable detector of the electromagnetic waves radiated by the Hertz oscillator.

Well aware of the navy’s need for a means of wireless signaling, Popov in the early 1890’s devoted himself to the problem of using electromagnetic waves for the transmission of signals. His search for a solution to this problem occurred in two stages: first, a sufficiently sensitive detector of electromagnetic waves was found; second, a device was developed that could reliably register the electromagnetic waves radiated by the Hertz oscillator. Popov chose as a detector the detector of radio waves developed by the French physicist E. Branley and later called a coherer. The coherer consisted of a small glass tube that had two electrodes at its ends and was filled with metal filings. When electromagnetic waves acted upon the coherer, the electrical resistance of the filings decreased drastically, and the sensitivity of the coherer was reduced. The sensitivity, however, could be restored by lightly shaking the coherer. After a number of painstaking experiments, Popov succeeded in making the coherer into a sufficiently sensitive and convenient detector of electromagnetic waves. The second stage was completed early in 1895 with the construction of a “device for the detection and registration of electric oscillations”—that is, a radio receiver (Figure 1). The device consisted of the following components, which were connected in series: a coherer; a polarized relay, which closed the circuit of an electric bell; and a battery, which supplied a direct current. When the resistance of the coherer decreased under the action of electromagnetic waves, the relay actuated the electric bell. The hammer of the bell struck first the bell and then the coherer. The impact of the hammer jarred the coherer, which was thereby returned to its sensitive state. Thus, immediately after receiving an electromagnetic signal, the coherer was ready to receive another signal. 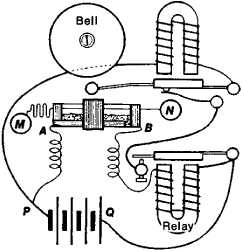 Figure 1. Schematic diagram of A. S. Popov’s radio receiver: (M) and (N) holders from which the coherer is suspended by a light spiral spring; (A) and (B) platinum plates of the coherer; (P-Q) electric battery, from which voltage is constantly supplied to the platinum plates through the polarized relay

By the spring of 1895, Popov built a sensitive, reliably operating receiver that was suitable for wireless signaling, or radio communication. For a transmitter he used a modified Hertz oscillator excited by a Ruhmkorff coil. To the ends of the rods of the oscillator he attached metal sheets that were 40 cm square in size. Signalization was effected by a switch in the supply circuit of the Ruhmkorff coil. The first radio communication experiments were conducted in the physics laboratory and then in the garden of the Mine Officers’ School. In these tests the receiver detected radio signals from a transmitter up to 60 m away. While conducting the experiments, Popov noticed that the distance of reliable reception could be increased by connecting a vertical conductor, or antenna, to the receiver. At a meeting of the physics division of the Russian Physical-Chemical Society on Apr. 25 (May 7), 1895, he delivered a paper on his invention of a wireless communication system and demonstrated the system’s operation. A report on his paper was published in the newspaper Kronshtadtskii vestnik on Apr. 30 (May 12), 1895. A report also appeared in 1895 in Zhurnal Russkogo fiziko-khimicheskogo obshchestva (vol. 27, issue 8, physics part) and in 1896 in the same journal (vol. 28, issue 1, physics part).

During his experiments in 1895, Popov found that his receiver reacted also to lightning discharges. He therefore constructed a special device that recorded on moving paper tape the signals produced by the electromagnetic radiation of thunderstorms. This device, later known as a storm indicator, was used by Popov in 1895 and 1896 to study the nature of atmospheric interference. Popov’s receiver and storm indicator are preserved in the Central Museum of Communications in Leningrad.

From 1895 to 1896, Popov worked on improvements in devices he had built; he also delivered lectures and gave demonstrations of the operation of the devices. In experiments in Kronstadt harbor in the spring of 1897, he succeeded in establishing radio communication over a distance of 600 m. In experiments conducted on ships in the summer of the same year, he achieved a distance of 5 km. During these tests, Popov discovered that metal ships affect the propagation of electromagnetic waves, and he proposed a method for finding the direction to an operating transmitter. In his experiments of 1897, he made use of electromagnetic waves with wavelengths lying on the boundary between the decimeter and meter ranges.

Popov conducted investigations of X rays in the same period. He was the first in Russia to take X-ray photographs of objects and of human limbs.

In 1899, Popov’s assistants P. N. Rybkin and D. S Troitskii discovered the detector effect of the coherer. Based on this effect, Popov built a “headphone message receiver” for the aural reception of radio signals. For this invention he was granted Russian patent number 6066 in 1901. This type of receiver was manufactured from 1899 to 1904 in Russia and, by the firm Ducreté, in France; it was widely used for radio communication. Early in 1900, Popov’s apparatus was used for communication during the removal of the wreck of the ironclad General Admiral Apraksin near the island of Gogland and in the rescue of fishermen who had been carried out to sea on an ice floe. In this case, the distance of transmission reached 45 km. In 1901, Popov achieved a distance of 148 to 150 km. under actual on-ship conditions.

Popov’s work was highly valued by his contemporaries in Russia and abroad. For example, his receiver was awarded a gold medal at the International Technical Congress in Paris in 1900. Popov’s achievements received special recognition in a decree of the Council of Ministers of the USSR in 1945. The decree proclaimed May 7 as Radio Day and established the A. S. Popov Gold Medal, which was to be awarded by the Academy of Sciences of the USSR for outstanding research and inventions in the field of radio. The institutions that have been named in honor of A. S. Popov include the School of Communications in Kronstadt, the Higher Naval School in Leningrad, the Odessa Electrotechnical Institute of Communications, the Central Museum of Communications, and the Scientific and Technical Society for Radio Engineering, Electronics, and Communications. The street on which Popov lived in Leningrad has also been renamed after him.