Also found in: Medical.
The following article is from The Great Soviet Encyclopedia (1979). It might be outdated or ideologically biased. 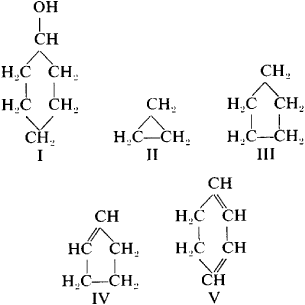 The numerous alicyclic compounds differ from one another in the number of rings, the relative position of these rings, the number of carbon atoms in the cycles, the presence of simple or multiple bonds between carbon atoms, and the nature of the functional groups. For example, mono-, bi-, tri-, and polycyclic alicyclic compounds are known. Cyclopropane (II) contains three carbon atoms in the cycle; cy-clopentane (III), five; and cyclohexane, six. As distinct from compounds I—III, which belong to the cycloalkanes, cyclopentane (IV). and cyclohexadiene (V) are typical examples of unsaturated compounds with a different number of dual bonds.

Alicyclic compounds appear in the most diverse compounds in nature. In particular, there are many cycloalkanes in petroleum, notably cyclopentane and cyclohexane, for which reason the group is sometimes referred to as naphthenes.