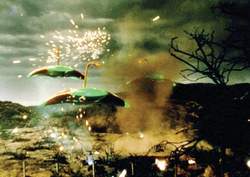 The Martians are coming! From producer George Pal's The War of the Worlds (1953).

Feedback
Flashcards & Bookmarks ?
Please log in or register to use Flashcards and Bookmarks. You can also log in with
Flashcards ?
My bookmarks ?
+ Add current page to bookmarks
Mentioned in ?
References in classic literature ?
They seemed to be holding a council, for he could hear them talking excitedly in the detested tongue of the alien invader. The time passed, but they seemed unable to reach a decision.
View in context
He described the Orion's Belt alien invaders to be both interesting and creative and that he would love to meet them in the future.&nbsp;
Alien Space Station Discovered In Orion's Belt?
The concept of alien invaders has fascinated us for decades.
Insect Invaders: These damaging intruders have recently made a home for themselves in the United States, raising concerns about vulnerable crops
THE chain of islands where Charles Darwin formulated his theory of evolution is under attack from alien invaders.
Fears over alien species in Galapagos
The storyline sees Bricksburg reduced to ruins by alien invaders. It is up to Emmet and a host of other heroic characters to go beyond their world to save their friends from the strange inhabitants of the Systar System.
ALIENS ARRIVE - BUT DO THEY COME IN pieces; STAYING IN
Emmet (Chris Pratt) and Wyldstyle (Elizabeth Banks) are back, this time having to fend off the threat of the Lego Duplo alien invaders.
Fun follow-up, but far from awesome
This week Jeremy visits the Mississippi, which is under threat from alien invaders and massive manmade disruptions.
TV GUIDE; FRIDAY JANUARY 25
Ambushed and separated from his convoy and his beloved canine fighter, Randy is newly challenged by being a POW in a war against alien invaders. Tim Powers' Earthquake Country (9781481483513, $16.00) is a riveting sequel to Expiration Date and explores what happens when the King of the West has been killed in California and the killer proves to be one of the multiple personalities in one head.
Baen Books
The premise that the alien invaders have rejected those they deem unworthy offers a unique consideration of disability and adolescence, and Wyatt seems a refreshing portrayal of neurodivergence.
Walz, Jason. Last Pick
Some subjects explored includes dissociative identity disorder in horror films, mentally ill mobsters, CotardAEs Syndrome and alien invaders, Edgar Allan PoeAEs unreliable narrators, and Kurt CobainAEs suicide.
Mental Illness and Popular Culture
ALIEN invaders have certainly changed a lot since the old 1950s sci-fi movies.
MARION MCMULLEN looks back at extra terrestrial threats on film as alien:covenant opens in cinemas