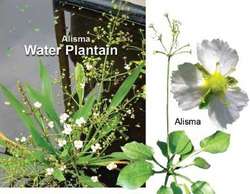 (water plantain), a genus of perennial herbs of the family Alismataceae. The long-petioled entire leaves are in a radical rosette. The white bisexual flowers have a double perianth and are in whorled panicled branches. The fruit is a compound nutlet of dry monospermous fruitlets. There are nine or ten species (according to another classification, one or two species with subspecies), distributed in the temperate zone of the northern hemisphere and in Australia. The USSR has six species. A. plantago-aquatica grows along bodies of water, grassy marshes, swampy meadows, and ditches. Its rootstock is rich in edible starch. The plant contains a substance that irritates the skin; in fresh form it is poisonous to cattle. Water plantain is sometimes cultivated as an ornamental.