see oniononion,
plant of the family Liliaceae (lily family), of the same genus (Allium) as the chive (A. schoenoprasum), garlic (A. sativum), leek (A. porrum), and shallot (A. ascalonium).
..... Click the link for more information. .
The Columbia Electronic Encyclopedia™ Copyright © 2013, Columbia University Press. Licensed from Columbia University Press. All rights reserved. www.cc.columbia.edu/cu/cup/ 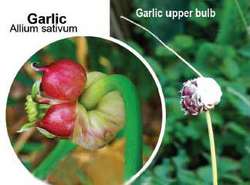 Antibiotic, antifungal, antiparasitic, anti-worm, antiviral, anti-yeast infection fighter for wounds. Contains almost 80 sulphur compounds, and is more effective than antibiotics in many cases, but unlike antibiotics, garlic does not kill friendly intestinal flora. It’s one of the strongest herbal healers known. Helps destroy cancer, break up tumors, thin the blood and normalize/lower blood pressure and cholesterol levels. Chelates heavy metals. Used for sinus infections, bronchitis, rheumatism, dysentery, H.Pylori, and antibiotic resistant strains of pathogens. Apply garlic juice to ringworm and use as insect repellent. An excellent immune booster that even benefits eye infections like conjucnctivitis, sties, other eye problems. For longevity and powerful health, it’s recommended to consume 2 cloves of garlic a day. Swallowing whole cloves won’t do much though. To activate the healing power, garlic cells need to be broken open (crushed, diced, sliced, ground etc) Plant has edible garlic bulbs on top of stem and cloves underground. Leaves look like thick grass. Important- Make sure the plant SMELLS like garlic! There is a poisonous plant that looks like a garlic bulb but doesn’t have any smell.
Edible Plant Guide © 2012 Markus Rothkranz

In folklore, thought to be a deterrent to vampire attack and also to witchcraft and the evil eye. Garlic was put to great use throughout Europe as protection from the plague, and before that, Roman soldiers ate it because they believed it gave them strength and courage.

It was said that the plant grew where Satan had planted his left foot after leaving Paradise. Sometimes referred to as stinkweed, garlic was generally hung over the entrance to the house, at the windows, and around the bed—especially the bed of a child—to fend off both vampires and witches.

Garlic was placed at a crossroads, for Hecate, and was also carried by travelers.

It was frequently used as an amulet or incorporated into a talisman for protection.

Like the crucifix, vampires are believed to have an intense aversion to garlic, and thus people have used garlic to keep vampires away. Introduced into the literary realm in Bram Stoker‘s novel, garlic became central to the developing vampire myth throughout the twentieth century. Garlic was the first treatment Dr. Abraham Van Helsing applied in the case of Lucy Westenra. Van Helsing had a box of garlic flowers sent from the Netherlands and decorated Lucy’s room with them. He hung them around Lucy’s neck and told her that there was much virtue in the little flower. The garlic worked until Lucy’s mother, not knowing the flowers’ purpose, tore them from her neck.

Garlic was a crucial element in killing the vampire. After driving a stake through the vampire’s body and removing its head, garlic was placed in the mouth. In fact, this was how Van Helsing finally treated Lucy’s body. This treatment was effective, however, only for recently created vampires, because the older ones, (Dracula and the three women in Castle Dracula), disintegrated into dust once a stake was thrust into their bodies. Stoker got the idea of using garlic following decapitation of the vampire from Emily Gerard’s The Land beyond the Forest. The book suggested that it was the method employed in Romania in very obstinate cases of vampirism (i.e., those that had not been cleared up by methods that did not require any mutilation of the body).

Garlic, a member of the lily family, has been used since ancient times as both an herb and a medicine. It developed a reputation as a powerful healing agent, and it was rumored that it possessed some magical powers as a protection agent against the plague and various supernatural evils. In southern Slavic regions, it became known as a potent agent against demonic forces, witches, and sorcerers. The Christian St. Andrew was said to be the donor of garlic to humanity.

In the southern Slavic countries and neighboring Romania, garlic was integrated into the vampire myth. It was used in both the detection of and prevention of attacks by vampires. Vampires living incognito in the community could be spotted by their reluctance to eat garlic. In the 1970s, Harry Senn was advised by his Romanian informants that the distribution of garlic during a church service and observation of those who refused to eat their portion was an acceptable manner of detecting a vampire hidden in the community.

Vampires were especially active in these regions around St. Andrew’s Eve and St. George’s Eve. On those days, windows and other openings in the house were anointed with garlic to keep the vampires away. Cattle might also be given a garlic rubdown. In some communities, garlic was mixed with food and fed to cattle before every important holiday. If a recently deceased person was suspected of vampirism, garlic might be stuffed in the deceased’s mouth or placed in the coffin. If detection and the need to destroy a vampire required exhumation of its body, the vampire might face decapitation and garlic might be placed in the mouth or within the coffin.

Garlic was also prominent in Eastern Europe and was served as the most universal protective devise used against vampires and vampiric entities. It appeared in the folklore of Mexico, South America, and China. Throughout the twentieth century, garlic became one of the most well-known objects associated with vampires. Not a particularly religious symbol, garlic survived while the crucifix slowly disappeared from the list of anti-vampire weapons. On occasion, as in the book and film The Lost Boys, the effectiveness of garlic was denied, but through the 1990s it continued to appear as a viable vampire detection and/or prevention substance.

While continuing as an item in the vampire hunter’s arsenal, it has been less used in the twenty-first century and has gradually been discarded under the weight of denials of its efficacy. It was used by Buffy and her friends on the TV show Buffy and Vampire Slayer, but infrequently. It is ineffective for the vampires in the book series Twilight. Garlic repels the vampires in Charlaine Harris’s novels based on the TV series True Blood, but is more of a nuisance than harmful, and is not even mentioned in Laura Smith’s Vampire Diaries.

(Allium sativum), a bulbous plant of the family Liliaceae. The erect or drooping leaves are flat, lanceolate, and grooved. The flower stalk, which is developed and straight, measures 60–150 cm in height. The bulb is compound and consists of two to 50 cloves, each of which is covered with a coarse, leathery scale.

Garlic grows wild in the mountains of Middle Asia, southern Kazakhstan, the Caucasus, India, and the Mediterranean region. It is cultivated in Europe, Asia, North and South America, and tropical Africa and Australia. In the USSR garlic is almost ubiquitous.

Cultivated garlic has bolting and common, or nonbolting, forms. There is an intermediate form with attenuated bolting. Garlic is classified as spring or winter, according to the method of cultivation. Spring garlic has narrow leaves and does not usually bolt; winter garlic has broad leaves and may be bolting or non-bolting. Winter garlic gives considerably higher yields than spring garlic but is not suitable for prolonged storage. Spring garlic can be preserved until the next harvest. In contrast to wild garlic, cultivated garlic does not yield seeds but forms 60 to 450 aerial bulbels in the inflorescence and approximately the same number of flower buds, which wither before they open. If the bulbel is not used for propagation, the flower stalks are broken off soon after they appear from the axil of the last leaf, increasing the harvest of underground bulbs by 20 to 40 percent.

Garlic is used in cooking in fresh and preserved form. The bulbs contain 35–42 percent dry matter, 6.0–7.9 percent protein substances, 7.0 to 28 mg percent vitamin C (the leaves contain up to 80 mg percent), 0.5 percent sugars, and 20–27 percent polysaccharides. The pungent flavor and distinctive odor of garlic are caused by the presence of essential oil (0.23–0.74 percent) containing phytoncides that kill the causative agents of many diseases.

Phytoncidal preparations of garlic bulbs—garlic tincture and allilsat (a 40-percent alcoholic garlic extract)—are used medicinally to intensify the motor and secretory functions of the gastrointestinal tract. They are prescribed internally to suppress the processes of putrefaction and fermentation in the intestine in cases of atonia of the intestine and in colitis, as well as in cases of hypertension and atherosclerosis.

About 20 selectively bred varieties have been regionalized in the USSR. Cultivated garlic is propagated by cloves of root bulbs or by aerial bulbels. In the first year single-cloved bulbs are grown from the bulbels; the next year bulbs divided into cloves appear. Spring garlic is set out in early spring; winter garlic is planted in time to take root before prolonged frosts. About 400,000 cloves are set out per hectare (500–2500 kg/ha). Plantings consist of single-, double-, or triple-row strips, with 20 or 40 cm between rows. Where there is excessive moisture, garlic is grown on ridges or in beds. The average yield is 50–80 quintals per ha. The most dangerous pest of garlic is the stem eelworm (Ditylenchus dipsaci).