onion, plant of the family Liliaceae (lily family), of the same genus (Allium) as the chive (A. schoenoprasum), garlic (A. sativum), leek (A. porrum), and shallot (A. ascalonium). These plants are characterized by an edible bulb composed of food-storage leaves that are rich in sugar and a pungent oil, the source of its strong taste. The above-ground green leaves, typically long and tubular, are also eaten. All these species are believed to be native to SW Asia and are known to have been cultivated since ancient times. The onion (A. cepa), no longer found wild, is a biennial now grown in many varieties throughout the world as a table vegetable. Common varieties include the strong-flavored red onion, the milder yellow onion, and the bland white onion. Pearl onions are small white onions used for pickling. The large Spanish and Bermuda onions have a delicate flavor. The onion was grown extensively by the ancient Egyptians, in whose writings it is mentioned, and was later spread by the Spanish colonists. The more pungent garlic, a perennial, has a bulb consisting of small bulbils called cloves. This part is most often used in cooking, chiefly as flavoring; garlic is especially popular in the Mediterranean region and East Asia. Used as a folk remedy for thousands of years, scientific investigation is confirming garlic's usefulness as a blood thinner, antioxidant, and cancer preventive. The shallot (supposedly introduced to Europe from Ascalon, or Ashqelon, by the Crusaders, hence the botanical name) is a perennial with clusters of small onionlike bulbs. It and the more familiar leek, a biennial with a small single bulb, are both commonly used fresh in salads, as asparaguslike cooked vegetables, and in soups and stews. The leek, cultivated in ancient Egypt and probably introduced to England by the Romans, is the floral emblem of the Welsh, who adorn their hats with its leaves on St. David's Day. Scallion is a popular term for any edible Allium with a reduced bulb, especially the leek and shallot. The Welsh onion (A. fistulosum) is a leeklike plant popular in Asia. The chive, today found wild in Italy and Greece, is a hardy perennial sometimes used as an ornamental border plant. For flavoring, its leaves are the most desirable portion. Several species of Allium are native to North America, where the edible types were collected by Native Americans. The ramp or wild leek (A. tricoccum) has a garlicky onion flavor. Found in E North America, it has a narrow bulb, thin reddish stem, and two to three elliptical, lancelike leaves. It is prized as a spring vegetable and is overharvested in some areas. Because of the disagreeable odor and taste imparted to the milk of cows that feed upon them, some species are considered weeds, especially the common wild garlic, A. vineale, naturalized from Europe. Onion is classified in the division Magnoliophyta, class Liliopsida, order Liliales, family Liliaceae.
The Columbia Electronic Encyclopedia™ Copyright © 2022, Columbia University Press. Licensed from Columbia University Press. All rights reserved. 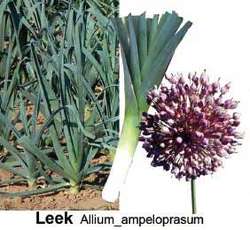 The common grocery variety looks like giant blades of grass when growing. In the onion/garlic family. The flower head is a perfect ball of whitish flowers. The edible part is the base of the leaves just above the root. Leeks purify blood, control cholesterol, high in iron, strengthen liver, throat ailments, and nasal congestion.
Edible Plant Guide © 2012 Markus Rothkranz
The following article is from The Great Soviet Encyclopedia (1979). It might be outdated or ideologically biased.

(Allium porrum), a perennial species of onion. Leeks form a thick stalk, the lower portion of which is used for food. The young leaves are also edible. Leeks are propagated from seeds.

1. an alliaceous plant, Allium porrum, with a slender white bulb, cylindrical stem, and broad flat overlapping leaves: used in cooking
2. any of several related species, such as A. ampeloprasum (wild leek)
3. a leek, or a representation of one, as a national emblem of Wales
Collins Discovery Encyclopedia, 1st edition © HarperCollins Publishers 2005