[′aŋ·gəl əv ə′tak]
(aerospace engineering)
The angle between a reference line which is fixed with respect to an airframe (usually the longitudinal axis) and the direction of movement of the body.
(mining engineering)
The angle in a mine fan made by the direction of air approach and the chord of the aerofoil section.
McGraw-Hill Dictionary of Scientific & Technical Terms, 6E, Copyright © 2003 by The McGraw-Hill Companies, Inc.
The following article is from The Great Soviet Encyclopedia (1979). It might be outdated or ideologically biased. 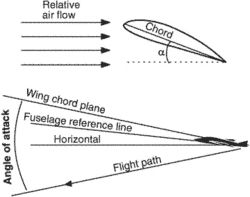