[′al·fə di′kā]
(nuclear physics)
A radioactive transformation in which an alpha particle is emitted by a nuclide.
McGraw-Hill Dictionary of Scientific & Technical Terms, 6E, Copyright © 2003 by The McGraw-Hill Companies, Inc.
The following article is from The Great Soviet Encyclopedia (1979). It might be outdated or ideologically biased.

About 200 alpha-radioactive nuclei are known to exist (1968); a large percentage of them are heavier than Pb (Z > 82). There are also a number of them among the neutron-deficient nuclei in the category Z < 82—for example, 14662Sm. The energy of alpha decay for all known alpha-radioactive isotopes lies in an interval from 3 to 9 million electron volts; (MeV; see Figure 1). The half-lives of alpha-radioactive nuclei vary over an enormous interval of values—for example, from 3 x 10-7 sec for 212Po to 5 ξ 1015 years for 142Ce. Experimental detection of alpha-active nuclei with mass number A < 200 is hampered by enormous lifetimes characteristic of nuclei with small alpha-decay energies. 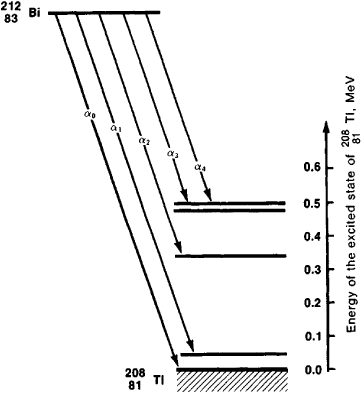 Note to Figure 2.: Energy diagram of alpha decay of

Bi with the formation of a

The total (potential and kinetic) energy of an alpha particle in different nuclei can be taken to be negative as well as positive (with increased nuclear charge) in value. In the latter case alpha decay is permitted in terms of energy. In Figure 3 the heavy line represents the potential energy of an 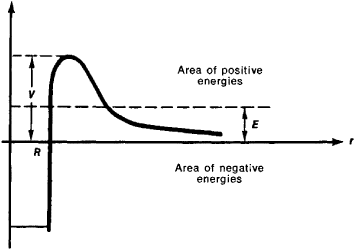 Here R is the effective radius of the nucleus, ν is the velocity of the alpha particle in its flight out of the nucleus, e is the charge of an electron, and h is Planck’s constant. Formula (1) leads to the Geiger-Nuttall relation, according to which the half-lives T1 and T2 of two alpha-active nuclei and the kinetic energies

of alpha particles emitted by them are bound by the relation

Formula (1) stipulates the strict dependence of the probability of alpha decay on energy. For example, changing the energy E of the alpha particles by 10 percent leads to a change in λ by a factor of approximately 3.

The factor ν in formula (1) is connected with the probability of formation of an alpha particle on the surface of the nucleus. Originally, in the theory of G. Gamow, the factor was assumed to be equal to v/2R—that is, equal to the frequency with which the alpha particle strikes the “border” of the nucleus. Later, L. D. Landau proposed the expression ν = D/2h, where D is the average distance between levels of the alpha particle in the field of the nucleus. Contemporary theories of alpha decay connect the value ν with the so-called reduced width of alpha decay, which is computed in concrete nuclear models. Calculation of the probability of alpha decay according to formula (1) with the formation of even-even nuclei in the ground state usually leads to results that are underestimated by a factor of 5 to 1,500 in comparison with experimental data; for alpha decay with formation of nuclei in excited states, to overestimated values. Since the probability of alpha decay depends on the dimensions of the nucleus, alpha decay can be used for rough determination of the dimensions of heavy nuclei. The study of alpha decay in nuclei in excited states facilitates research on nuclei with small values of Z (for example, the nuclei of many rare earth elements), for which alpha decay in an unexcited state is not observed. Such excited nuclear states are formed by capturing slow neutrons.

Many basic notions about atomic and nuclear physics owe their very origins to the study of alpha decay. The theory of alpha decay, proposed in 1928 by G. Gamow and independently by R. Gurney and E. Condon, became the first application of quantum mechanics to nuclear processes.

Feedback
Flashcards & Bookmarks ?
Please log in or register to use Flashcards and Bookmarks. You can also log in with
Flashcards ?
My bookmarks ?
+ Add current page to bookmarks
Mentioned in ?
References in periodicals archive ?
In 2011, we were able to carry out synchronous experiments on [sup.239]Pu alpha-decay using nine different devices, two of which were located at the North Pole during the period of work at the Pan-Arctic ice drifting station (latitude 89[degrees] 01 -89[degrees] 13 North, longitude 121[degrees] 34-140[degrees] 20 East), one in Antarctic (the Novolazarevskaia station, latitude 70[degrees] South, longitude 11 [degrees] East), and six more having different collimators inPuschino (latitude 54[degrees] North, longitude 37[degrees] East).
Synchronous measurements of alpha-decay of [sup.239]Pu carried out at north pole, antarctic, and in puschino confirm that the shapes of the respective histograms depend on the diurnal rotation of the earth and on the direction of the alpha-particle beam
5 shows high probability of histograms similarity at synchronous measurements of light and alpha-decay intensities.
Dependence of changes of histogram shapes from time and space direction is the same when fluctuation intensities of both light-diode light flow and [sup.239]Pu alpha-activity are measured
Besides, these figures show similarity of palindrome effects at measurements of fluctuations of alpha-decay intensity, that is, independence of a macroscopic fluctuations phenomenon from nature of processes under examination [1].
Algorithmization of histogram comparing process. Calculation of correlations after deduction of normal distribution curves
Experimental investigations of gravitational-wave influence on the form of distribution function of alpha-decay rate.
Experimental investigations of the existence of a local-time effect on the laboratory scale and the heterogeneity of space-time