[al′taz·ə·məth]
(engineering)
An instrument equipped with both horizontal and vertical graduated circles, for the simultaneous observation of horizontal and vertical directions or angles. Also known as astronomical theodolite; universal instrument.
McGraw-Hill Dictionary of Scientific & Technical Terms, 6E, Copyright © 2003 by The McGraw-Hill Companies, Inc.
The following article is from The Great Soviet Encyclopedia (1979). It might be outdated or ideologically biased. 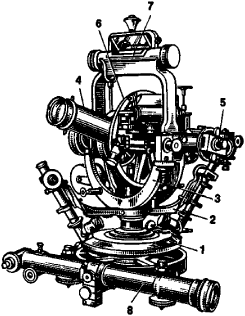 Feedback
Flashcards & Bookmarks ?
Please log in or register to use Flashcards and Bookmarks. You can also log in with
Flashcards ?
My bookmarks ?
+ Add current page to bookmarks
Mentioned in ?
References in periodicals archive ?
However, on reading both papers it is obvious that Ainslie's criticism was fully justified, as not only was Waters not comparing like for like (the refractor was in a dome and the reflector had a poor mirror), he seemed to be ignoring the great work carried out by observers of the time using altazimuth mounted reflectors.
Captain M. A. Ainslie, (1869-1951): his observations and telescopes
The other great breakthrough in altazimuth mounts was low-tech as opposed to high-tech.
Telescopes 101: bewildered by all the telescopes advertised in this magazine? They're all just variations on a few simple themes
It's the Astrolight altazimuth mount that really distinguishes the AZ8 from the reflectors of yore.
A modernized classic: parks optical combines a newly designed altazimuth mount with tried-and-true Newtonian optics
A motorized telescope on a computerized altazimuth mount can track celestial objects as accurately as one on an equatorial mount.
Choosing your first telescope: the right equipment can give you a lifetime of astronomical enjoyment. Choose wisely!
The instrument comes with an altazimuth mount, manual dual-axis slow-motion controls, and an adjustable aluminum tripod.
Telescope buyer's guide: our guide to 115 refractors, reflectors, and catadioptrics lets you make an intelligent, scope-by-scope comparison
Basic altazimuth mounts can certainly be used for astronomical observation, but you may be frustrated by the continual need to make simultaneous manual corrections for two axes.
Be scope savvy: looking for that first telescope, or thinking of moving up to a better one? Here's what you need to know as you ponder the vast selection available to you
For example, this telescope works well only on an altazimuth mount. An equatorial mount will place the eyepiece at uncomfortable positions regardless of how you configure the star diagonal--which undermines the whole point of the design.
A bent rich-field refractor: this twist on an old favorite provides new levels of viewing comfort
It comes with a fully computerized altazimuth mount, dual-axis drives, and an adjustable tripod.
Telescope buyer's guide: our guide to 82 refractors, reflectors, and catadioptrics lets you make an intelligent, scope-by-scope comparison
It usually has an altazimuth mount, but computer-controlled, variable-speed motors on both axes can make it track the stars almost like an equatorial.
The art of using a telescope: most celestial objects that a telescope will show look extremely faint, tiny, or both. You need to learn some skills to see all that you can see
* SOLID MOUNT The new William Optics EZTouch altazimuth mount ($499) features a heavy-duty surveyor-style tripod with an innovative head that can accept two telescopes at once.
Solid mount
The expense of completing my master's degree forced me to sell most of them, but I think I've come up with the perfect urban telescope: a 3-inch apochromatic (highly color-corrected) refractor on an altazimuth mount (one that simply moves up and down and side to side) with slow-motion controls and a simple sighting device.
The joys of city observing: do you live in the middle of a light-polluted city? Armed with binoculars or a small telescope, you can hunt down and explore more interesting sky targets than you probably realize
Locating and tracking an object near the zenith is another stiff test of an altazimuth mount, yet late into the evening of July 7th the CPC followed the double star Nu ([nu]) Draconis with precision as it passed near my zenith.
Celestron's revamped 8-inch SCT: Celestron's venerable Schmidt-Cassegrain optics team up with state-of-the-art Go To technology in the new line of CPC telescopes