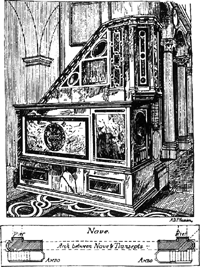 ambo, 1
1. In early Christian churches, a pulpit for reading or chanting the Gospels or the Epistles.
2. In contemporary Balkan or Greek churches, a large pulpit or reading desk.
McGraw-Hill Dictionary of Architecture and Construction. Copyright © 2003 by McGraw-Hill Companies, Inc.

Feedback
Flashcards & Bookmarks ?
Please log in or register to use Flashcards and Bookmarks. You can also log in with
Flashcards ?
My bookmarks ?
+ Add current page to bookmarks
Mentioned in ?
References in periodicals archive ?
Table 1 shows the mean values for EME, FSIM, and AMBE of different contrast enhancement methods (THE, BBHE, DSIHE, RMSHE, RSIHE, BBCCE) using 20 healthy subjects.
Table 2 indicates the contrast enhancement methods which impose significantly different impact on the MR images in all cases, that is, eMe, AMBE, and FSIM (P < 0.05).
Fisher's least significant difference test (Table 5) indicates the mean differences between RMSHE and BBCCE (-0.79; 0.79 for BBCCE and RMSHE) which is insignificant in AMBE. Other contrast enhancement methods show significant mean difference.
Medical image visual appearance improvement using bihistogram bezier curve contrast enhancement: data from the osteoarthritis initiative
CRISIL believes that the Ambe group will continue to benefit from its established market position in the flour business and healthy relationships with institutional customers, over the medium-term.
CRISIL gives BB+/P4+ to Ambe Agro Industries' bank facilities
To help address the problem, Ambe said the tribal council created a cooperative that will take care of the livelihood in the communities, and will encourage residents to become forest guards.
Ambe admitted that with a lot of challenges faced by conservation efforts, the culture of the indigenous tribe holds a significant role in the preservation of the biodiversity - the home of the lumad and the Philippine eagle.
The tribal elders, he said, are trying to organize the youth and make them active in conservation efforts, but Ambe admitted that cultural preservation remains one of the difficult tasks ahead for their tribe.
Folklore binds tribe to protect the PH eagle
Most times, we deworm and treat everything including malaria if they have such issues affecting them,' said Dr Ambe. Most of the admitted kids had either their biological mother or grandmother with them to undergo the stages of therapeutic treatment, said matron Theresa.
Ambe says they had trained about 49 cases from June till date.
Ambe told the Nigerian Tribune that the adolescents had been neglected in this country for a long time, saying further that children and adults were taken care of but the adolescents were totally neglected.
The battle against malnutrition in North-East Nigeria
Every year Hindus hold a nine day festival to worship Mata Ambe and every Hindu household has a statue of her in their homes.
Our goddess is walking and bleeding... it's a miracle