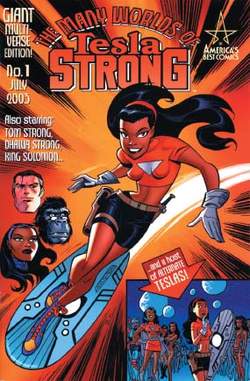 The Internet-era axiom that “in the future, everyone will be famous to fifteen people” rings especially true—and can sting especially sharply—for fans and creators of the comic book art form. By the mid-1990s, the man acknowledged by many as the medium’s all-time finest scripter, Alan Moore, found that such acclaim brought no career security. Having authored the 1986 miniseries Watchmen (with artist Dave Gibbons), one of the few superhero sagas to register as legitimate literature and also an enduring favorite of hardcore fans, by 1996 Moore’s position in pop-culture history was secure but his footing in the present was by no means certain. At that time, comics entrepreneur Rob Liefeld had hired Moore to reimagine a group of heroes Liefeld originally launched for Image Comics and later relocated to his own companies (first Maximum and then Awesome). These characters—including the Super-man-ish hero Supreme and the Wonder Woman wannabe Glory—were in the affectionate/ironic archetype mode that Moore had pioneered, and his handling of the characters for the three companies brought the approach to a new high.

But the high proved short-lived when Awesome landed in the same historical dustbin as many other Liefeld ventures, casting Moore adrift, leaving a number of his scripts unillustrated, and turning those that were into instant collectors’ items. But like the transformative traumas of superhero lore (nuclear accidents, planetary explosions, bad business plans), the experience ultimately put Moore—and his fans—in enhanced circumstances. By mid-1999 Moore had launched an imprint of his own, America’s Best Comics (ABC), under successful indie upstart WildStorm (with a “firewall” promised between Moore and the editorial edicts of DC Comics, which acquired WildStorm from Image soon after Moore joined, but had alienated him some time before). With characteristic ambition, Moore imagined not just isolated adventure comics but a whole alternate universe across several titles. But, with a sadder-but-wiser pragmatism, he and his artist collaborators ceded ownership of almost all their new characters at the start, in exchange for a more immediately lucrative work-for-hire deal.

Nonetheless, Moore’s publishers understood the prestige his presence conferred, and the relatively free artistic hand he was given benefited publisher, author, collaborators, and readers alike, throughout his time on the titles. The line debuted with the unlikely runaway hit The League of Extraordinary Gentleman (with artist Kevin O’Neill), known by the general public for the 2003 live-action movie version which, remarkably, was optioned for film before an issue of the comic ever came out. A kind of Wild Wild West by way of Masterpiece Theatre, the book is a dark farce in which a gamut of literary characters—from Dracula’s Mina Harker to the Invisible Man—interact with each other and with real-life events in a satirical swirl of the history readers think they know and the classics they don’t really remember. The book spawned a surprising subgenre of Victorian-era action strips (from Cliffhanger’s Steampunk to Vertigo’s Barnum!) and a second series of its own, in addition to the movie.

Though ostensibly unconnected to ABC’s other books, Moore and O’Neill’s 1890s terminators set the tone for the rest of the line: Moore went back to the very DNA of the American action hero for his models, basing the new characters on pulp adventures and even earlier popular lore, or on equally uncharted (or at least long-neglected) precincts of popular entertainment. The main single-character series were Tom Strong (with artist Chris Sprouse) and Promethea (with artist J. H. Williams III). Tom Strong is a benevolent warrior-wiseman in the Doc Savage mold from which Superman himself was cast; Promethea, a kind of self-made muse, is a spirit of creativity, with roots in personified patron saints from pagan myth (Athena) to pre-World War II patriotic mascots (Britannia, Columbia).

Also in the first batch of ABC titles was Top Ten (with artists Zander Cannon and Gene Ha), a superhero team book with the twist of being a self-described Hill Street Blues in spandex; and Tomorrow Stories, an anthology of short stories concerning several characters: Greyshirt (with artist Rick Veitch), a mysterious detective whose trickily designed stories paid homage to Will Eisner’s Spirit; Cobweb (with artist Melinda Gebbie), an aristocratic femme fatale drifting through homoerotic fables more reminiscent of a surrealist journal than a comic; Jack B. Quick, Boy Inventor (with artist Kevin Nowlan), an unlikely theoretical-physics sitcom centered around a hellish, rural Harry Potter; The First American (with artist Jim Baikie), a patriotic-hero spoof recalling the halcyon days of early MAD magazine; and Splash Brannigan (with artist Hilary Barta), an outlandish burlesque of both the “elemental” strain of superheroes (Human Torch, Iceman, etc.) and the shape-shifting school (Plastic Man, Metamorpho, etc.), in the person of a sentient splotch of ink.

Lovingly executed in a multitude of pastiche styles from across the history of pop culture, the books brim with imagination and charm, both nostalgic and fresh. Moore’s fascination with historical permutations of heroic archetypes reaches full flower here. Tom Strong is the product of wonky genetic and social engineering, à la Philip Wylie’s Gladiator. Raised by a tyrannical Victorian father in a gravity-enhanced chamber to develop unnatural strength in normal settings (while being schooled with equal boot-camp intensity), Strong emerges as a brawny boy science genius when dad’s scheme is wiped out by a volcanic eruption in the secluded Caribbean setting he’s chosen for it. Adopted by a wise but unstereotypical tropical tribe, Strong develops a heart to match his mind, and travels to his ancestral America to become the benefactor of the utopian Millennium City. The tribe’s mythical “goloka root” that slows his age is a handy device for century-spanning adventures that dispense elegantly with the contrived immortality of most action heroes, while allowing Moore and his artists to picture their star in a plethora of period homages and send-ups.

Similarly, Promethea portrays a recurring archetype who stretches back to eighteenth century potboilers and forward through later pulps and comics. Researching the character for a pop-literature class, young college student Sophie Bangs discovers that there is actually a lineage of women who have invoked and then channeled Promethea through their own creative activities as writers or artists ( Bangs herself will be the next one to do so). The character lives in the Immateria, a kind of heaven for all creatures of the imagination, and is a benevolent creative force sometimes manifesting in the real world. This background allowed for more dazzling stylistic variety and historic sweep, and for spiritual storylines far from the common fisticuffs of standard superheroics. A kind of vernacular holy book, the series ranks among Moore’s masterworks.

In its first five years, the ABC line earned just about every award available in the medium (including multiple Eisners from 2000-2003), attracting acclaim and generating controversy. (A Cobweb story reportedly ridiculing the Church of Scientology was spiked by DC; an entire issue of the League was reduced to pulp for its reproduction of a Victorian ad for a feminine-hygiene product with “Marvel” in its name, no doubt to the bafflement of DC’s main competitor.) Along the way, many of comics’ most prestigious artists (from Jerry Ordway to Kyle Baker) had made cameo contributions, whole worlds had been created (Moore is a major practitioner of setting-as-character, from Greyshirt’s natural-gas-powered modern metropolis to Top Ten’s citywide retirement community for surplus superheroes), and plentiful new possibilities for the medium had been glimpsed.

In 2003, Moore made the bombshell announcement that he would be entering semi-retirement and shutting down the line, making comics history one last time by actually writing an apocalypse for the entire ABC world (the medium’s first voluntary closure of a company). Weary of an underappreciated art form’s economic grind, but with financial security ironically enhanced by its merchandizing to other media— the royalties from two film adaptations he refused to ever watch (The League and From Hell)—Moore intended to concentrate on novels, his ongoing ritualistic recording and performance-art work, and occasional comics, at his leisure. Timing this transition for his fiftieth birthday, it was what he needed to top the notorious announcement of his debut as a professional magician for his fortieth.

The sole exception to Moore’s retirement from comics is The League of Extraordinary Gentlemen, which Moore and artist Kevin O’Neill own, and which Moore continues to write. The new League stories, however, are published by Top Shelf (in the United States) and Knockabout Comics (in the UK), not by DC Comics.

Wildstorm also published Albion, a 2005–2006 miniseries plotted by Alan Moore, scripted by his daughter Leah Moore and her husband John Reppion, and drawn by Shane Oakley. In this series Moore revived numerous British characters from comics of the 1960s and early 1970s that were published by IPC Media, such as Captain Hurricane, Robot Archie, the Spider, and the Steel Claw. —AMC & PS