(redirected from American Coalition for Traditional Values)
The following article is from Conspiracies and Secret Societies. It is a summary of a conspiracy theory, not a statement of fact. 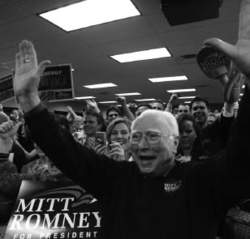 The Rev. Louis Sheldon, seen here at a 2008 rally for presidential hopeful Mitt Romney. Rev. Sheldon is the leader of the Traditional Values Coalition, which has become an influential political force, especially for Republicans.

The Traditional Values Coalition has grown to a membership of 43,000 church congregations in twelve denominations by defending America’s “cultural heritage” and opposing homosexuality, the teaching of evolution, and anti-Christian bigotry.

Rev. Louis Sheldon, founder of the extreme-right-wing evangelical Traditional Values Coalition (TVC), argues that homosexuality is not a life style, but a “death style.” Sheldon’s daughter, Andrea Sheldon Lafferty, is the organization’s executive director, who aggressively pursues the TVC mission to “restore America’s cultural heritage” by speaking out against gay rights, the teaching of evolution in public schools, and reproductive freedom. Founded in 1980, TVC now claims a membership of 43,000 church congregations in twelve denominations. This very large coalition of churches receives monthly newsletters and occasional action alerts and special messages from Rev. Sheldon.

The principal focus of the TVC is on what is perceived as the “true homosexual agenda” of recruiting children into homosexuality. In their newsletters the Sheldons warn that gays and lesbians are child molesters who will snatch children from shopping malls and even from private homes if no adults are present. In 1985 Rev. Sheldon proposed placing AIDS victims into special “cities of refuge,” much like the old leper colonies.

TVC has opposed hate-crimes legislation on the grounds, Rev. Sheldon explained, that such a bill would “protect sex with animals and the rape of children as forms of political expression.” In addition, said Andrea Sheldon Lafferty, hate-crime legislation would enable homosexual activists to punish any person who had the courage to speak out against their recruitment of children.

In 2001 TVC applied pressure to California’s school board members to reject aspects of California Assembly Bill 537, the California Student Safety and Violence Prevention Act of 2000, claiming that it promoted homosexuality and anti-Christian bigotry. In Colorado and Oregon TVC has attempted to remove constitutional amendments protecting the civil rights of gays and lesbians. In California, Arizona, Missouri, and Washington, TVC has organized antigay initiatives.

TVC favors teaching creationism over evolution in public schools, opposes any sex-education curriculum that does not emphasize abstinence to the exclusion of information on birth control and disease prevention, and endorses prayer in public schools. Traditional Values Coalition has its home office in Anaheim, California.

Feedback
Flashcards & Bookmarks ?
Please log in or register to use Flashcards and Bookmarks. You can also log in with
Flashcards ?
My bookmarks ?
+ Add current page to bookmarks
Mentioned in ?
References in periodicals archive ?
In 1983, LaHaye opened the American Coalition for Traditional Values (ACTV -- pronounced "active.").
Left behind: if best-selling end-times author Tim LaHaye has his way, church-state separation will be ..
In October 1985, he was the keynote speaker at a politically important conference in Washington, D.C., sponsored by the Reverend Tim LaHaye's American Coalition for Traditional Values. The conference theme was "How to Win an Election," and the event was held under the banner of "Serve the Lord by Running for Public Office."
Watch on the right: Pat Robertson's contract on America