cranberry, low creeping evergreen bog plant of the genus Oxycoccus of the family Ericaceae (heath family). Cranberries are considered by some botanists to belong to the blueberry genus Vaccinium. The cultivated species is the native American or large cranberry (O. or V. macrocarpus). The tart red berries are used for sauces, jellies, pies, and beverages. The Massachusetts colonists probably served wild cranberries with turkey at the first harvest feast in 1621, establishing a Thanksgiving tradition. Commercial cultivation began in Massachusetts in the early 19th cent., then in New Jersey and Wisconsin, later in Washington and Oregon and in Canada. United States cranberry acreage now totals c.25,000. Massachusetts leads in production, followed by Wisconsin and New Jersey. Cranberry bogs are flooded to control weeds, to protect against cold, and to facilitate harvesting. Cranberry is classified in the division Magnoliophyta, class Magnoliopsida, order Ericales, family Ericaceae. The high-bush cranberry or cranberry tree, a member of the honeysuckle family, is unrelated. 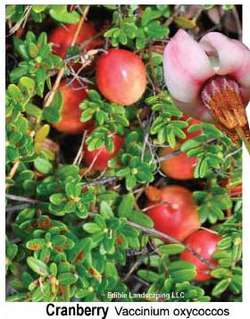 [′kran‚ber·ē]
(botany)
Any of several plants of the genus Vaccinium, especially V. macrocarpon, in the order Ericales, cultivated for its small, edible berries.
McGraw-Hill Dictionary of Scientific & Technical Terms, 6E, Copyright © 2003 by The McGraw-Hill Companies, Inc.

Feedback
Flashcards & Bookmarks ?
Please log in or register to use Flashcards and Bookmarks. You can also log in with
Flashcards ?
My bookmarks ?
+ Add current page to bookmarks
Mentioned in ?
References in periodicals archive ?
It needs to be clearly stated and acknowledged by clinicians, scientists and the industry that the impressive outcome of this trial had not been accomplished with American cranberry juice, but with juice from two closely related European species (Nowack, 2003).
Two large-scale trials with American cranberry juice products are under way.
American cranberry ( Vaccinium macrocarpon Aiton); Family: Ericaceae
The American cranberry has been introduced as a neophyte to several European bogs.
Cranberry juice for prophylaxis of urinary tract infections - conclusions from clinical experience and research
Northern regions of the country are where the American cranberry grows the best; the plant does not like the summer heat of the South.
For gardeners who would like to grow cranberries but don't want the hassle, I recommend a plant that can be grown in all but the southernmost regions of the country Viburnum trilobum, or American cranberry bush viburnum, is tough, durable, attractive and produces berries.
American cranberry bush is also native to North America.
Through the garden gate
The North American cranberry is naturally rich in polyphenolic antioxidants and the approved quantities will ensure that sufficient amounts of proanthocyanidins (type A)--the components responsible for the cranberry's anti-adhesion mechanism are being made available to the consumer.
Another healthy boost for Ocean Spray cranberries
Ocean Spray's Sweetened Dried Cranberries (SDCs) constitute 30% of the product, ensuring that the native American cranberry's vibrant colour and tart taste are prominent in the cereal bar.
Shepherdboy rounds up cranberry cereal bars
As awareness grows of the substantial health benefits to be reaped from the North American cranberry's nutraceutical properties, the company is displaying its extensive range of cranberry ingredients and their application in functional food and beverage products.
Ocean Spray strengthens cranberry health campaign
(1) This unique dual health benefit differentiates the North American cranberry from other berries, making it a true superfruit.
Superfruits: heroes of health