, town, England
Amesbury (āmzˈbərē), town, Wiltshire, S central England. Located on Salisbury plain, the town is among the oldest continuously settled locations in Great Britain. In 980 the widow of King Edgar founded Amesbury Abbey, where Queen Guinevere of Arthurian legend is said to have died. Stonehenge, the best-known megalithic monument in Britain, Durrington Walls, and many other Neolithic remains are nearby. 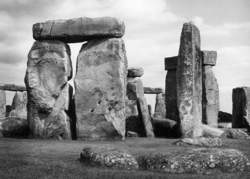 Amesbury, an important site of Arthurian legends, is near the pre-Christian site of Stonehenge. Fortean Picture Library.

The town of Amesbury, located about eighty miles west of London, England, lies in an area of ancient and continued holiness. Nearby, on the Salisbury Plain in Wiltshire, is Stonehenge, one of the most ancient megalithic structures. A little to the north is the Avebury stone circle, scene of a religious tradition going back some four thousand years.

Welsh historians believe that during the Middle Ages, a monastery was located in Amesbury, but a consensus seems to have developed that in the time of Ambrosias Aurelianus, uncle to the fabled King Arthur, it was a garrison for troops, and the place was named Ambrosiani after Ambrosias.

Anon I made profession, and took vows As nun encloistered: I became Christ's spouse, At Amesbury, as Abbess to the house. I changed my ermines for a goathair stole, I broke my beauty there, with dule and dole, But love remained a flame within my soul.

Thus at Amesbury we find a curious but fairly common occurrence. One religious tradition, in this case the stone-building culture of prehistorical Stonehenge, is superseded by a completely different religious tradition. In this case, it is the legend of King Arthur's court and the search for the grail from Christ's last supper—the legend marking the transition from paganism to Christianity.

Feedback
Flashcards & Bookmarks ?
Please log in or register to use Flashcards and Bookmarks. You can also log in with
Flashcards ?
My bookmarks ?
+ Add current page to bookmarks
Mentioned in ?
References in periodicals archive ?
This one looks at the history of the two communities associated with the manuscript, Syon and Amesbury priory, and at related early sixteenth-century religious history in England, including the Holy Maid of Kent and developments in eucharistic doctrine.
Alexandra Barratt Anne Bulkeley and her Book: Fashioning Female Piety in Early Tudor England. A study of London, British Library, MS Harley 494