A law of electromagnetism which expresses the contribution of a current element of length dl to the magnetic induction (flux density) B at a point near the current. Ampère's law, sometimes called Laplace's law, was derived by A. M. Ampère after a series of experiments during 1820–1825.

Whenever an electric charge is in motion, there is a magnetic field associated with that motion. The flow of charges through a conductor sets up a magnetic field in the surrounding region. Any current may be considered to be broken up into infinitesimal elements of length dl, and each such element contributes to the magnetic induction at every point in the neighborhood. The contribution dB of the element is found to depend upon the current I, the length dl of the element, the distance r of the point P from the current element, and the angle Θ between the current element and the line joining the element of the point P (see illustration). Ampère's law expresses the manner of the dependence by Eq. (1). The field near

a current may be calculated by finding the vector sum of the contributions of all the various elements that make up the current.

The proportionality factor k depends upon the units used in Eq. (1) and upon the properties of the medium surrounding the current. In the SI system, the factor k is assigned a value of 10-7 weber/ampere-meters when the current is in empty space. As in other equations associated with electric and magnetic fields, for example Coulomb's law, it is convenient to replace k by a new factor μ0 related to k as in Eq. (2).

the law of mechanical (ponderomotive) interaction between two currents flowing in short segments of conductors which are at some distance from each other.

The force F12 acting from first conductor segment Δ/1 on the second Δ/2 (see Figure 1) is equal to:

The force F21 with which the second element acts on the first is expressed by a formula similar to equation (1). In absolute value the forces F12 and F21 are equal. However, in the general case where the orientation of Δl1 and Δ/2 with respect to one another is arbitrary, the directions of the forces F12 and F21 do not lie on the same straight line and do not comply with the principle of equal action and reaction. 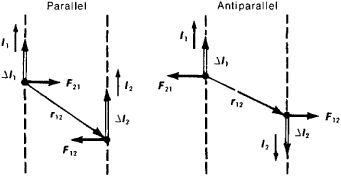 Figure 2. Interaction of two elementary currents. All segments (vectors) in the figure lie in one plane

Ampére’s law is also known as the formula for determining the force F with which a magnetic field described by a magnetic induction vector B acts on an elementary segment of a conductor Δ/ in which a current of strength / is flowing:

The standard for the unit of current strength, the ampere, is based on Ampère’s law and determined by using a current balance.

Feedback
Flashcards & Bookmarks ?
Please log in or register to use Flashcards and Bookmarks. You can also log in with
Flashcards ?
My bookmarks ?
+ Add current page to bookmarks
Mentioned in ?
References in periodicals archive ?
The Deriving Ampere's Law task, which is the realistic model-eliciting activity used in this study, was developed to extend the mathematics connections associated with the Solenoid Invention Kit.
analyzing 3D-printed artifacts to develop mathematical modeling strategies: While working on the modeling activity, the students also experienced the benefits of teamwork and persistence
It is the switched current that happens first, with the EM field being a consequence of Ampere's Law. The EM field does not induce the current; the current generates the EM field.
Are TRANSMISSION LINE SIGNALS Different from Conductor Signals?
Using Ampere's Law, the ampere turns across the interwinding region is the same as the ampere turns in either winding.
Designing More Efficient HV Power Supplies Using Planar Flyback Transformers: Power supply efficiencies exceeding 90 percent achievable through proper transformer design
607 (repeated in many textbooks) of the dynamic current equation with the J + D term begins with "Ampere's law" (see Art.
Reflections on Maxwell's Treatise
Grover starts from the basic Biot-Savart Law, which comes from Ampere's Law and Gauss's Law, each, one of Maxwell's equations, and derives all his approximations.
The inductance bible redux; Fredrick Grover's invaluable tome is essential for partial inductance calculations
The magnitude of the Poynting's vector on the earth's surface S(r, 0) = [E.sub.r](r, 0)H(r, 0), for r > a may be calculated by considering the simple formula of the magnetic field intensity given by the Ampere's law H(r, 0) = i/ (2[pi]r).
Study of the conduction phenomenon inside an inhomogeneous half-space of exponentially increasing conductivity
While filling us in on why spending your allowance on x- ray glasses is a poor investment, Kakalios covers mechanics (including Newton's Law of Gravity, the properties of matter and the cube-square law) energy (including conservation and Ampere's Law), and modern physics (including quantum mechanics, solid-state physics and tunneling phenomena).
The Physics of Superheroes
Ampere's Law (1825): An electric current is accompanied by a magnetic field whose direction is at right angles to the current flow.
Is ELECTRICAL CURRENT Particle Flow or Wave Phenomenon?
So it is possible to rewrite Ampere's Law in function of vector "D".
About the Physical Reality of "Maxwell's Displacement Current" in Classical Electrodynamics
[DELTA] x E = -j[omega]B Faraday's law [DELTA] x H = J + j[omega]D Ampere's law [DELTA] x D = [[rho].sub.lambda] Gauss' law [DELTA] x B = 0 Gauss' law (magnetic)
Maxwell's influence on signal integrity: after almost 150 years, Maxwell's equations still have a strong influence on modern SI tools and methodologies
The currents flowing on the pair of half loops generate fluxes with opposite directions by the Ampere's law. By setting this loop coupler at the desired position, the [TM.sub.111] mode can be suppressed and [TE.sub.011] mode excited in one-port cylindrical cavity.
A novel dual-loop coupler for one-port cylindrical cavity permittivity measurement
In FDTD, the electric field is stored at grid locations and the integration shown on the left of Ampere's law in Eq.
Electric field Discontinuity-Considered Effective-Permittivities and Integration-Tensors for the three-dimensional Finite-Difference Time-Domain method