see windwind,
flow of air relative to the earth's surface. A wind is named according to the point of the compass from which it blows, e.g., a wind blowing from the north is a north wind.
..... Click the link for more information. .
The Columbia Electronic Encyclopedia™ Copyright © 2013, Columbia University Press. Licensed from Columbia University Press. All rights reserved. www.cc.columbia.edu/cu/cup/

An instrument to measure the speed or velocity of gases either in a contained flow, such as airflow in a duct, or in unconfined flows, such as atmospheric wind. To determine the velocity, an anemometer detects change in some physical property of the fluid or the effect of the fluid on a mechanical device inserted into the flow.

An anemometer usually measures gas flows that are turbulent. The cup anemo meter, pitot-static tube, and thermal anemometer are mostly used to measure the mean velocity, while the hot-wire, laser Doppler, and sonic anemometers are usually used when turbulence characteristics are being measured. (The term “thermal anemometer” is often used to mean any anemometer that uses a relationship between heat transfer and velocity to determine velocity.)

An instrument for measuring the velocity of airflow.
McGraw-Hill Dictionary of Architecture and Construction. Copyright © 2003 by McGraw-Hill Companies, Inc. 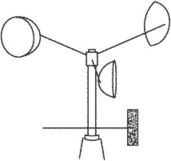 An instrument to measure wind velocity. The common cup type of anemometer consists of three or more hemispherical cups extending on horizontal arms from a vertical shaft or spindle. The higher the speed, the faster the cups will rotate. By suitable gearing, a pointer indicates the speed.
An Illustrated Dictionary of Aviation Copyright © 2005 by The McGraw-Hill Companies, Inc. All rights reserved

an instrument for recording the speed and often the direction of winds
Collins Discovery Encyclopedia, 1st edition © HarperCollins Publishers 2005

Feedback
Flashcards & Bookmarks ?
Please log in or register to use Flashcards and Bookmarks. You can also log in with
Flashcards ?
My bookmarks ?
+ Add current page to bookmarks
Mentioned in ?
References in periodicals archive ?
I reviewed Vaavud's first-gen Mjolnir smartphone anemometer a few years ago and discovered its short comings, yet appreciated its utility on the water and land.
Smart anemometers: WeatherFlowa top pick we prefer the WeatherFlow WindMeter smartphone anemometer over the Vaavud Sleipnir, but both Devices can be improved with updated connectors
In cases of vane and hot-wire anemometers, the location of the measuring point can become critical for accurate measurement.
Development of a portable, small-scale multi-nozzle flowmeter with exit pressure control
The concept of anemometer based on gas discharge can be traced back to the last century; it was firstly presented through the relationship between voltage, current, and wind speed in gas discharge test by Lindvall [5].
Research on the Plasma Anemometer Based on AC Glow Discharge
In Figure 6, anemometer factor [K.sub.S], obtained from the calibrations performed on the anemometers used in the testing campaign, is shown as a function of the parameter [r.sub.r], for rotors with the same cup center rotation radius, [R.sub.rc].
Mathematical analysis of the effect of rotor geometry on cup anemometer response
Until the time when a single anemometer and anemometer geometry again become the defacto industry standard, manufacturers will likely not be able to report area factors that can be used with any of the newer instrumentation types available.
Air balancing area factors
While the measurement masts are installed on site it should be made sure that wind vanes are not installed at the same height of anemometers as this might disturb the stream of air available to the anemometers.
Wind data management
Another activity students could be given to learn about the wind involves using handheld anemometers. Given "low-cost" handheld anemometers, students could work individually or in teams to take various wind measurements around the school campus or at other designated sites.
Prospecting for wind: a gold prospector would set out with a pack mule, provisions, a pickaxe, and a shovel, whereas today's wind prospector is armed with a computer, the Internet, Google maps, and a host of meteorological tools
At each location, hold the anemometer at arms-length.
Gauging gusts: make your own instrument to measure wind speed
Rotating vane anemometers (Figure 1) sense the air speed from the pressure differentials.
An overview of room air motion measurement: technology and application
John Wylam, vicar at Thockrington Church, close to the Northside Farm site, wrote to the council to object to the anemometers. He said: "This will presumably be a precursor to more wind turbine applications, and there is already much perturbation regarding the impact of proposed turbines.
Wind turbine plans just keep on coming; Villagers angered by new applications - before inquiry is held
TSI Incorporated is proud to launch a newly redesigned line of anemometers and indoor air quality (IAQ) instruments.
Test ventilation and indoor air quality products