Angel of Mons | Article about Angel of Mons by The Free Dictionary
https://encyclopedia2.thefreedictionary.com/Angel+of+Mons
Printer Friendly 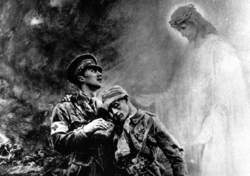 Some powerful tales in history involve angels intervening in human events. Such is the case with the Angel of Mons story in which spirits from heaven helped save British soldiers during World War I.Fortean Picture Library.

In September 1915, noted British writer Arthur Machen published an article in the London Evening News about the World War I Battle of Mons, which had occurred in August of the previous year. The battle was the first significant engagement of the war between the British and Germans, and it resulted in a British retreat from the field.

In his article, actually a reprint of a story that had appeared in a book of his short stories published in the spring, Machen focused on the account of a British officer who reported that as the army moved west, he had seen shimmering lights in the sky from which emerged winged figures carrying bows and arrows. Thanks to the distraction provided by these figures, the British were able to make a successful disengagement from the Germans. He noted that two others had also seen and made note of the mysterious angelic forces. Machen later received letters verifying the event. The believability of the story was increased due to the semi-miraculous nature of the retreat against large odds of success.

The problem with the story, as Machen clearly stated in the original publication, was its complete fiction. Published many months after the battle, Machen wanted to provide a momentary distraction from a war that was not going well. Instead, he found people who wanted to believe the story was true. Most notable in this endeavor was one Phyllis Campbell, a nurse with the Red Cross. She claimed she had treated French soldiers who saw a Joan of Arc figure in the sky. Journalist Harold Begbie picked up the story and wrote a pamphlet about Mons, On the Side of the Angels, in which he included testimony of an officer who described watching the angels for more than 45 minutes around eight o’clock one evening. The story grew over the years. As late as 1930, a retired German espionage officer offered an explanation for the angels: They were a misinterpretation of motion pictures projected on the clouds by the Germans. As late as 1963, historian A. J. P. Taylor referred to the angelic event as fact in his history of the war. He cited Mons as the only battle where “supernatural intervention was observed, more or less reliably, on the British side.”

In fact, the story is complete fiction, the events first recounted by Machen being a figment of his imagination that inadvertently played to the deeper hopes of his readers at a time of crisis. There is no verifiable evidence that any phenomena occurred during the retreat from Mons to have suggested the story.

Feedback
Flashcards & Bookmarks ?
Please log in or register to use Flashcards and Bookmarks. You can also log in with
Flashcards ?
My bookmarks ?
+ Add current page to bookmarks
Mentioned in ?
References in periodicals archive ?
MR ARTHUR Machen, above, the novelist who originated the legend of The Angel of Mons, died today at a Beaconsfield nursing home at the age of 84.
Arthur Machen dead
David Clarke's The Angel of Mons (Wiley, 2007) is a good modern examination of the legend.
Explaining the legend of Angels; FEEDBACK
But in the meantime the short but in the meantime the short battle had provided the first legend of the war - the Angel of Mons.
Towns thathave a special place in history; As the world prepares to mark the 100th anniversary of The Great War on Monday, STEVE RACE visits lesser-known Belgian battlefields with remarkable stories to tell
| On August 21 at 6pm, a free |lecture, e Angel of Mons and other Myths of the First World War, will be given at the Lit & Phil by cultural historian Gail-Nina Anderson.
Messages in time from the war's silent heroes
The angel of Mons? Who or what is the figure at her feet?
Mysteries of the female form to ponder, and an unwanted voice; OPINION
From time to time the Angel Of Mons - sighted by soldiers as they went over the top to their deaths - hovered dramatically above the battlefield.
War horror is no Picnic for viewers; TV REVIEW
The quality of Machen's writing was demonstrated early in World War I when the newspaper published the short story "The Angel of Mons" from The Bowmen and Other Legends of War (1915), which circulated widely as a true story and gave hope to thousands of soldiers in battle.
Machen, Arthur
The testimonies of those who believed themselves to have seen the Angel of Mons - that configuration of awesome power which appeared over the battlefields - are witness again to the human need for spiritual help in unbearable situations and for their tendency to create the right kind of angel to fit the needs of the moment.
Flights of angels
DOROTHY Wedlake in her recent letter asked whether there was evidence like the account of the unauthorised truce on the front in 1914 of the account of the Angel of Mons apparition, which it was alleged so encouraged the British forces and terrified the Germans.
DOROTHY Wedlake in her recent; FEEDBACK
During the First World War, soldiers reported many strange sightings, the most famous being the Angel of Mons which would mysteriously intervene to save them.
The truth about myths
In Wales, it was as damn near miraculous as the Angel of Mons,' he said.
Homely food pub the best in Wales
February 5, 6pm: The Angel of Mons: Myths and Legends of the First World War ( Dr David Clarke
The dates